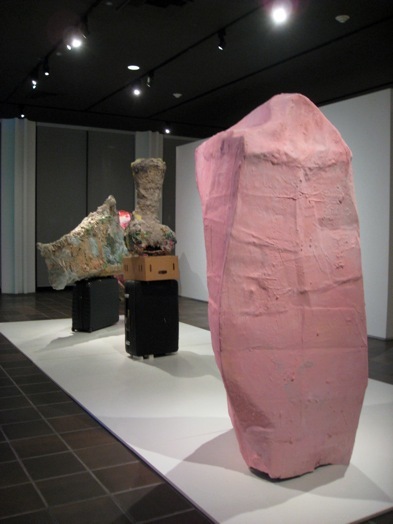 Franz West at LACMA. Via tryharder

Spanning from early interactive work from the 1970s to more recent large installations, LACMA’s retrospective exhibition on Austrian artist Franz West is his most comprehensive in the United States so far.  The exhibition, organized by The Baltimore Museum of Art, explores West’s history and position and highlights West’s critical contributions to post-1965 art.  West expanded the definition of sculpture as an environmental and social experience and “continues to do so today,” according to Michael Govan, LACMA CEO.  His work with furniture, found materials, papier-mâché has infused his work with a unique European character.  Informed by philosophers Freud and Wittgenstein, West brings together the aesthetics of trash art and painterly abstraction in prosthetic and biomorphic forms.  West’s collages, installations, sculptures and furniture can be experienced in over a hundred objects at LACMA, through June 7th, 2009. 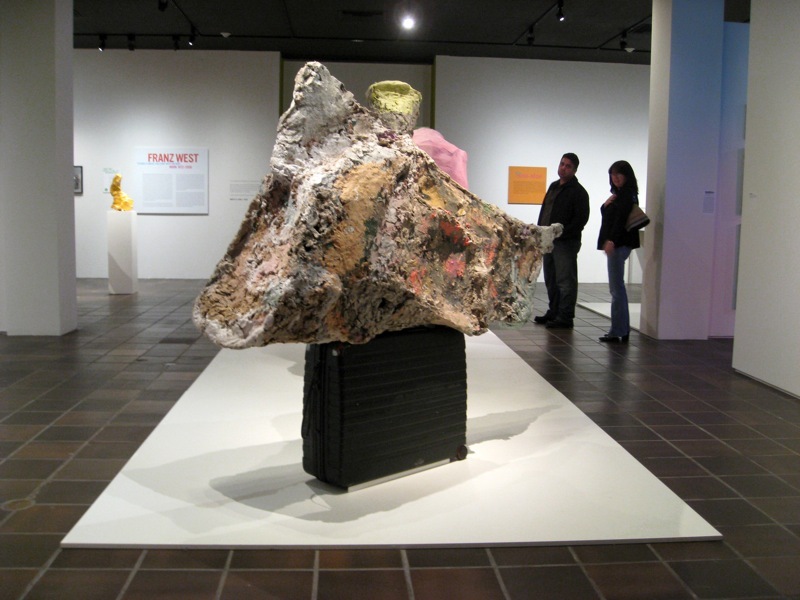 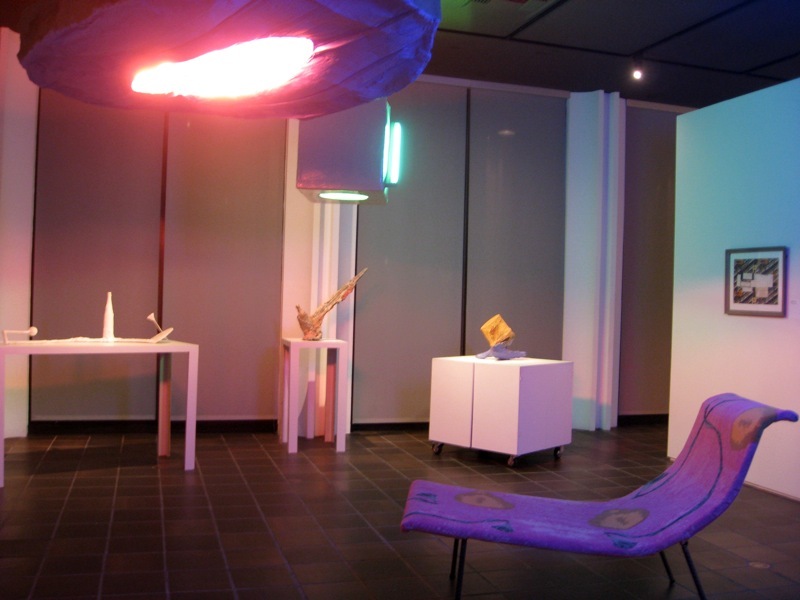 Franz West was born in Vienna in 1947. His artistic practice originated in the mid-1960s as a response to Actionism, a local movement that attempted to challenge the passivity of the art world through radical public performances. In the early 1970s, he developed a series of works that remained significant throughout his oeuvre. West’s Adaptives (“Paßtücke”) were small, mobile sculptures that required to be experienced by the viewer by picking it up and carrying it around. The interaction with the object completed the art work. According to West: “The idea was more to create an environment, and that the Adaptive could be handled and used rather than be looked at.” This idea has remained at the core of West’s artistic practice throughout the three decades that span his career and clearly resonates in the exhibition at LACMA. 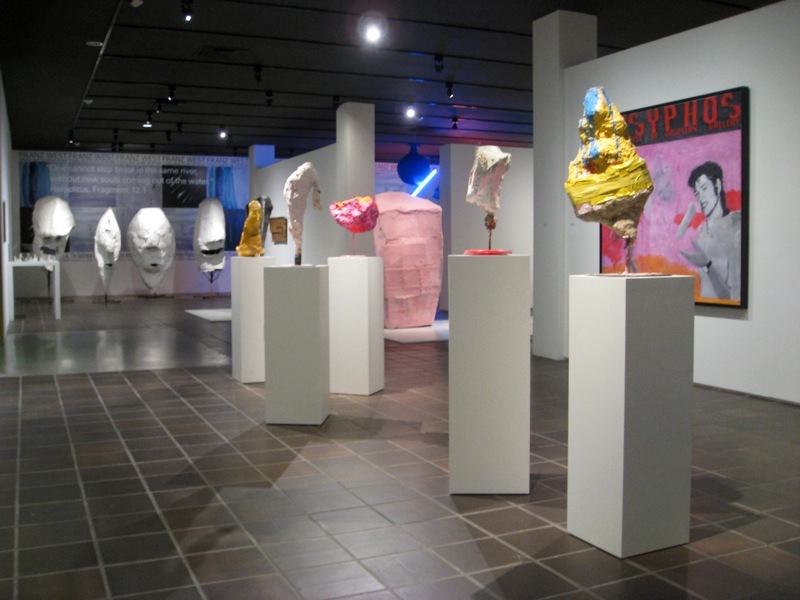 Franz West has continued to live and work in Vienna, but is an artist of absolute international acclaim. His works have been included in Documenta twice and numerous times in the Venice Bienniale. In the past decade, West’s work has been exhibited at the Museo Nacional de Arte Reina Sofía in Madrid, the Kunsthalle Wien in Vienna and at Whitechapel Gallery and Gagosian Gallery in London and New York.  In New York, West’s work can be admired in the collection at the MoMA and in the museum’s recently opened exhibition Compass in Hand: Selections from the Judith Rothschild Foundation Contemporary Drawings Collection. In addition, Zwirner & Wirth gallery currently presents Franz West: Works From The 1990s ,through 2 May, 2009.

[ILLUSTRATION OMITTED] Primarily paper Leading this project is Victorinox Swiss Army’s packaging and product manager Chris Costa, who studied packaging design at the University of Bridgeport, CT. Early on in this process, Costa recognized a potential consumer perception win by moving away from the plastic clamshell structure altogether versus changing the materials used to make those clamshells.

“A simple material change to a more sustainable material, such as RPET, would be more renovative rather than innovative,” he explains.”And the perception would still be it’s plastic clamshell.” Instead Costa was drawn to Mead Westvaco (MWV) Natralock packaging, which is a paperboard-based alternative to plastic clamshells. Made from sustainably sourced paperboard with a clear plastic APET or RPET blister, Natralock has a primarily paperboard design that MWV says uses 60 percent less plastic on average than petroleum-based PVC clamshells. The paperboard blister packaging also is designed to require approximately 65 percent less energy to seal.

Whose decision is it anyway?

Costa was careful not to let the excitement of a new packaging format distract him from the initial goals of the project. Specifically he was looking at four issues:

(1.) Material choice (2.) Component pricing (3.) Ease of manufacturing (4. Deliverability of the product Instead of relying on supplier-provided information, Costa contacted Natralock users for their real-life experiences. At least one of the peers whom Costa contacted also is a Victorinox Swiss Army customer–Eric Abraham, a packaging manager for sporting-goods retailer REI, which uses Natralock for some of its private-label packaging.

Speaking to REI was especially important because Victorinox Swiss Army needed to address all of their customers’ packaging needs in the packaging format it decided to adopt. go to site victorinox swiss army

[ILLUSTRATION OMITTED] According to Costa, packaging decisions including the decisions to move to and away from clamshell packaging are very much dictated by the customer needs of brand owners. “Many times it isn’t us that decide what package a product goes into,” Costa explains. “It’s our customer who might be out there demanding a particular way to package something because of their own requirements: Some customers say, I only want your product in a box; some customers say, I only want it in a plastic clamshell; some customers say, I only want it to be a particular size because of their fill lines or their theft compliance requirements.” Distinctly American Costa had to balance the needs of retailers of varied size and selling environments, so he spent a year communicating with buyers from little shops to the big box retailers and their graphic, legal and compliance departments.

[ILLUSTRATION OMITTED] “It was back and forth with all of Natralock has a primarily paperboard design that uses 60 percent less plastic. those major retailers and the little guys because they’re very important too,” Costa recalls. “We went to L.L. Bean; we went to Target; we went to Walmart; and we said, ‘Hey look at this and tell us what you think. Help us help you.'” Costa also collaborated with Victorinox Swiss Army’s parent company, Victorinox AG in Ibach, Switzerland. He introduced Natralock to his counterpart in Victorinox AG, Kurt Arnold, who embraced the concept and quickly began to test and implement it.

After examining the needs of Victorinox customers in the U.S. and Europe, Costa realized that Victorinox Swiss Army’s customers could benefit from packaging designed for unassisted sales. “Our challenge in this country was that we put many more SKUs into what we call ‘selfservice packaging,'” says Costa. “In Europe, they have more assisted sales situations where there is an associate or a salesperson who’s helping the customer through the process, and it’s sort of the reverse here. We are in a situation that relies heavily on communicating without assisting salespersons, so we want peg spacing that gives a billboard effect so we can tell a story that represents the brand quickly.” [ILLUSTRATION OMITTED] A partner that listens The large billboarding area of Natralock can enhance the self-service attributes of brand owners’ packaging, but only if brand owners maximize use of this area through a redesign. To help brands optimize Natralock’s billboard attributes, MWV offers design services. in our site victorinox swiss army

“Because when you get out of plastic, and go into Natralock, you really do have a blank palette in terms of what you can do from a graphics standpoint,” says Jeff Kellogg, vp of MWV’s Natralock packaging business.

Steve Kazanjian plays a critical part in these creative offerings in his role as global creative director of MWV Packaging. “Steve’s a pro,” Costa remarks. “He got it when I said I need packaging that sells, I don’t need some esoteric, elegant design that puts people to sleep. He’s creative. He was responsive, and he actually listened. He knew I knew what I was talking about.” This time with feeling Kazanjian was excited to work on the project because the Victorinox Swiss Army brand holds high emotional value for him.

“What’s interesting is that, especially for the Swiss Army knife demo[graphic], you will not find one person who does not remember getting their first Swiss Army knife,” Kazanjian remarks. “You will not find one person who doesn’t remember where it still is or when they lost it. I remember I got mine the first day of Cub Scouts, and I still have it.” Victorinox Swiss Army’s previous clamshell packaging had focused more on the functionality of the knives versus the emotional experience of owning and using one. So Costa and Kazanjian worked to highlight the new packaging’s emotional appeal to prospective buyers.

“The package doesn’t need bells and whistles because it is what it is,” Costa recalls. “”We wanted to get out of the way of the package because the Swiss Army knife tells its own story.” The resulting packaging uses six different Swiss mountain themes with a consistent color scheme of silver and the Swiss Army red. The iconic cross and shield logo also is prominently displayed.

Instead of communicating the knives’ functionality with copy, Costa and Kazanjian cleverly used the transparent cell and photography of the ‘open implements’ to describe each tool. Costa says that he wanted the knife in its packaging to quickly communicate four messages: “What I am; what I offer; how much I cost; and how pleased you’re going to be once you get me home.” [ILLUSTRATION OMITTED] High-tech and energy-efficient Swiss engineering is evident nearly everywhere at the 160,000 sq-ft Victorinox Swiss Army DC from its high-tech vertical lift mechanisms (VLM), pick towers and conveyor systems throughout.

“We have a lot of Swiss ingenuity, forethought and overbuilding if you will,” Costa remarks. “In the end, this serves us very well because we can handle present-day needs and easily adapt to new demands The company will be putting this flexibility to the test, when its new SDS6C six-station, semiautomatic rotary blister sealer is delivered from packaging supplier Visual Packaging.

At time of publication, the machine still is located at the packaging machinery supplier. Three sets of tooling have been created to seal the packages. A coding and labeling strategy will be powered by Zebra Technologies inkjet and print-and-apply labelers is in place. Product movement is and will continue to be controlled by SAP.

The new packaging line also has ‘green’ attributes thanks to the lower dwell time needed to seal the paperboard blister packaging.

“Once we get through a full production run of the Natralock packaging, we will be reducing the electrical throughput by 60 percent by not using RF sealing,” Costa exclaims. “And our packaging weight reduction will be 30 percent.” The rolling launch of the Natralock-packed knives is slated to begin April 1.

This entry was posted on Sunday, May 3rd, 2009 at 10:28 am and is filed under Go See. You can follow any responses to this entry through the RSS 2.0 feed. You can leave a response, or trackback from your own site.