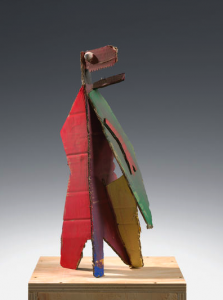 Currently on view at Contemporary Fine Arts in Berlin is ‘Shitrospective’, the gallery’s first solo show by Jake and Dinos Chapman. In this exhibition the Chapman brothers recreate the most important sculptures and installations from their career together in miniature format made in cardboard and poster paint. 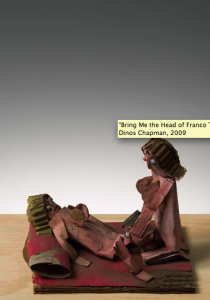 Bring me the head of Franco Tosselli (2009) by Jake and Dinos Chapman, via Contemporary Fine Arts Berlin

They recreate works such as “Fuckfaces” and “Sex” to consequently reveal the until now non-existing models for many of their main works. Out of cardboard they also reconstruct the first version of their installation “Hell” which was destroyed in the warehouse fire of the shipping company Momart and redone and re-exhibited again this past year.  The Shitrospective and its farcical tone suggests another recent prankster type exhibition this past July by the Chapman brothers held at Orel Art, a London gallery known for focusing on Russian art, in which the brothers assumed fake Russian identities of Yuri and Konstantin Shamanov and produced a body of work derivative of various Russian schools. 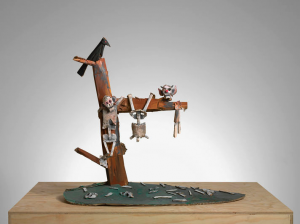 The works, made out of the simplest materials, become sketch-like renditions of iconic masterworks and refer back to the artistic achievements of the Chapman brothers.  Despite their cheap materials these works hold a charming and almost uplifting presence even as they contemplate often difficult themes of death, sex, and the afterlife. 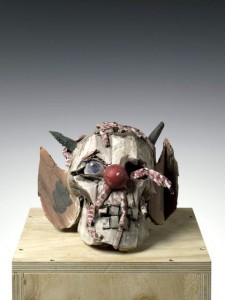 Jake and Dinos Chapman have had solo exhibitions in major museums and galleries such as the Tate Britain, Tate Liverpool, Kunsthaus Bregenz and CAC Malaga. They live and work in London. 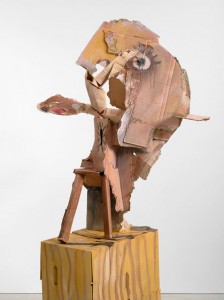 Artist and Model (2009) by Jake and Dinos Chapman, via Contemporary Fine Arts Berlin

Briton speeds to a victory at Spring Runoff: With 661 runners and walkers, field is largest in 28-year history of the event.

The Pueblo Chieftain (Pueblo, Colorado) March 6, 2006 Byline: Mike Spence Mar. 6–Showing no signs of the back injury that had slowed him for the past three months, Mark Warmby raced to victory at 5 kilometers on Sunday during the 28th annual Spring Runoff at Dutch Clark Stadium.

Warmby was all alone when he entered Dutch Clark Stadium for the final 300 yards of the race. He clocked a time of 15 minutes, 31 seconds, well ahead of runner-up, Colorado State University-Pueblo women’s cross country coach Craig Binkley, who’s time was 18:02.

On a day when the Runoff, sponsored by The Pueblo Chieftain and organized by the Southern Colorado Runners, set a record for number of entrants at 661, Warmby added some international flavor.

The 27-year-old runner hails from Manchester, England. He’s spent the past six weeks living and training with his coach, Gary Stanies, in Colorado Springs, something he’s done for the past three years.

Warmby was part of a strong contingent of runners who came down from Colorado Springs. The group dominated the winner’s stand on Sunday. Five of the six race winners either live or train in Colorado Springs.

Warmby was the first to cross the finish line. He also was the class of the field at Sunday’s races.

“I’m here training for (Britain’s) world cross country trials,” Warmby said. “The trial is on Saturday. I’m flying back on Wednesday.” Warmby entered Sunday’s race not knowing what to expect from the competition but knowing exactly what he wanted from himself. website boulder running company

“This was a good race for me,” Warmby said. “I needed a blowout more than anything. I’ve been injured, so I just wanted to get fit for the trial.” Warmby took off from the gun and never looked back, running virtually the entire race from the lead.

“I was pretty much by myself the whole race,” Warmby said. “I just wanted to run as close to 15 (minutes) as I could.” In England, Warmby is the No. 6-ranked steeplechaser. In last year’s world cross country trials in England, he finished fourth.

Now that he’s proven to himself that he’s fit and ready to compete for a spot on Britain’s team for the World Cross Country Championships, does Warmby think he has a shot?

“You’ve pretty much have to make the top three,” Warmby said. “I’ve got as good a chance as I did last year when I finished fourth. It depends on the day, really.” McIntyre topped a more competitive field in the women’s 5K, finishing just ahead of Lindsey Herrera if Pueblo, who clocked a 23:37.

“I don’t think it was my fastest time,” said McIntyre, who works in the marketing department of the Colorado Springs Fine Arts Center. “I took some time off over the winter because I had knee problems, and I’m just now working back into shape.” McIntyre said Sunday’s race was enjoyable from start to finish. site boulder running company

“It’s exciting,” McIntyre said. “I like how everybody starts together. It’s a lot of fun.” The Runoff marked the beginning of McIntyre’s preparations for the Pikes Peak Ascent, set for August.

“Right now, I’m running about 15 miles a week,” McIntyre said. “Later in the summer, I’ll be running a lot more.” In the men’s 10K race, Mosman, a former Creighton University cross country runner, sped away from the field.

“It was pretty easy,” said Mosman, who works at Boulder Running Company in Colorado Springs and runs for the Adidas Racing Team. “It was a good, nice day. The course was kind of flat. I used it as a workout.” Mosman said his strategy was to take it easy early in the race and push the final half.

“I kind of went the first two miles easy, then the next three miles hard, and then I pushed as hard as I could to the finish.” While his time was considerably slower than his personal best of 30:20, Mosman said he was happy with his effort.

“It’s too early in the season to run that fast,” Mosman said.

Carpenter, a teacher and track coach at Sierra High School in Colorado Springs, rarely runs 10K races. In fact, Sunday’s Runoff 10K was only the second she’s ever run.

That didn’t stop her from topping the field.

“I think I ran better last year,” said Carpenter, who runs about 25 miles a week. “I’ve been snowboarding all winter. I haven’t been doing much running.” Despite finishing about a minute slower than her personal best, Carpenter said she enjoyed the Runoff competition.

“I was hoping to hit 60 minutes,” said Lebo, a teacher at Fountain Valley School. “I haven’t done a lot of fast training, so my time was a nice surprise.” The last time Lebo raced was at the Detroit Marathon in October. He’s been putting in 50 miles a week since then.

He spent much of the last half of the race running by himself.

“Once we got to the 4-mile mark and the 10K people split off, I was all by myself,” Lebo said. “From miles four to six, it was pretty rough going. There was nobody around, but then you hit the turnaround and you see the people when you’re coming back and they were encouraging.” Distributed by Knight Ridder/Tribune Business News.

This entry was posted on Sunday, January 3rd, 2010 at 8:58 pm and is filed under Go See. You can follow any responses to this entry through the RSS 2.0 feed. You can leave a response, or trackback from your own site.