A bronze sculpture, entitled L’Homme qui marche I, by Alberto Giacometti became the most expensive work ever sold at auction this evening when it realized $104,327,006 at Sotheby’s Impressionist and Modern Art Evening Sale in London. In an interesting turn of events, Giacometti’s sculpture represents the recession from beginning to end – it was being auctioned as an asset of the failed bank Dresdner Bank and the remarkable price undoubtedly signals a resurgence in the art market. In total, the 39-lot sale realised $233,622,228.37 – the highest total ever reached for a sale in London. While 8 lots went unsold, an impressive 17 pieces sailed past the £1 million mark including three works that individually realized more than £10 million – in reflection of these enormous sales Melanie Clore, Co-Chairman, Impressionist & Modern Art, Sotheby’s Worldwide, stated: “We are thrilled to have sold these great works this evening and that they have been recognized for the masterpieces that they are.  The competition which generated these exceptional results demonstrates the continued quest for quality that compels today’s collectors.”

more text, images and related links after the jump….

The steep run-up in bidding for the Giacometti on Wednesday was likely aided by two factors: the work’s large size and the artist’s popularity among international buyers. His nearly 9-foot-tall figure of a woman, “Big Standing Woman II,” sold at Christie’s in May 2008 for $27.4 million, but dealers say his oversize sculptures of men are even more coveted. “Walking Man I” is three times taller than the “Toppling Man” sculpture that Sotheby’s sold in November for $19.3 million.

The second story of the evening’s auction was the sale Gustav Klimt’s Kirche in Cassone – a painting that attracted the attention of four bidders who raised the final price to $43,208,606, a new auction record for a landscape by the artist, and a price well in excess of the pre-sale estimate of £12-18 million. The work eventually sold to an anonymous buyer on the telephone. a work that went missing during the second world war, it was offered for sale tonight pursuant to an agreement between Georges Jorisch, the now 81-year old great nephew of the original owner, and the European private collector in whose family the painting had been for several years. Georges Jorisch said: “Today’s sale closes a long-open chapter in my life in which I recover a part of my forbears’ legacy and pass it on to future generations, just as my parents would have wished.” 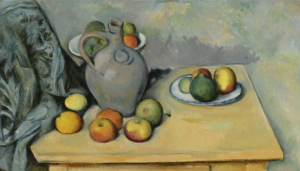 The third work to sell pass the £10 million mark was Paul Cezanne’s still life Pichet et fruits sur une table. The painting had last been seen on the auction market in May 2001 at Sotheby’s, New York, where it failed to achieve a low estimate of $14 million. Twelve years earlier in May 1989, at the height of the Impressionist-art boom, the work sold in the same New York auction house for $11.6 million.

This entry was posted on Wednesday, February 3rd, 2010 at 9:52 pm and is filed under Art News, Auction Results. You can follow any responses to this entry through the RSS 2.0 feed. You can leave a response, or trackback from your own site.