Go See – New York: Robert & Ethel Scull 'Portrait of a Collection' at Aquavella Galleries through May 27, 2010 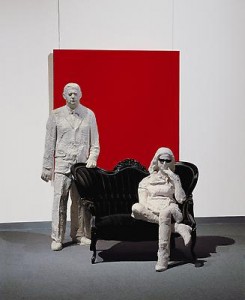 Portrait of Robert and Ethel Scull (1967) by George Segal, via Acquavella Galleries

Currently on view at Acquavella Galleries is an exhibition which brings together many works from the collection of Robert and Ethen Scull. Pioneers of Pop Art (known as the Mom and Pop of Pop), the Sculls dominated the art world during the 1960s and and early 1970s.  The exhibition is comprised of forty-four works of art made by twenty-three artists. Works by Jasper Johns, Claes Oldenburg, Rauschenberg, and Any Warhol are reunited again and emphasize the extraordinary collecting personality of Robert and Ethen Scull. 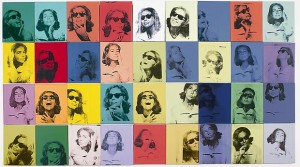 During the mid-1950s the Sculls began acquiring works by leading Abstract Expressionists such as William de Kooning, Claes Oldenburg, Clyfford Still, and Barnett Newman. They hence established a remarkable collection of works of art by artists from the New York City.  Spurred to uncover the next new trend, they soon began collecting Pop Art and consequently became the first owners of many works which are now considered masterpieces such as Andy Warhol’s 200 One Dollar Bills, which sold this past autumn for $43.8 million; Police Gazette, 1995, by William de Kooning; Jasper John’s Map, a gift from the Sculls to the Museum of Modern Art; and the Iconic Ethel Scull 36 Times, Warhol’s first commissioned portrait. 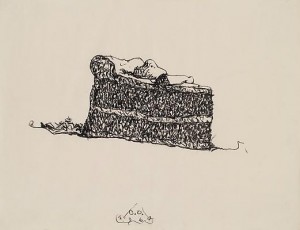 Perhaps the Sculls’ greatest love was for Jasper Johns. They were among the earliest collectors of John’s work and at one point owned 22 masterworks of which seven are included in the exhibition such as Iconic Painted Bronze (Ale Cans) (1960), The Critic Sees (1961), and Double Flag which Scull commissioned in 1961. 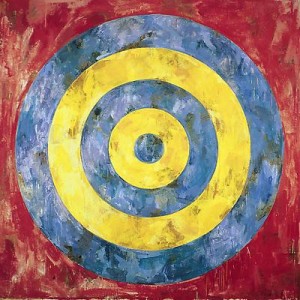 The current exhibition at Acquavella Galleries presents for the first time a comprehensive selection of the artwork which the Sculls owned. Neither the high-profile Scull auction of 1973 nor the estate sale after Robert Scull’s death provided such an overview. The exhibition was organized by writer and former Whitney Museum curator Judith Goldman who borrowed many of the works on display from major museums and private collections. Portrait of a Collection brings together a rare amount of exceptional artworks from some of the later twentieth century’s greatest American artists. 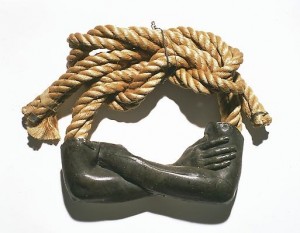 Chicago Sun-Times October 14, 2009 | Janet Rausa Fuller Last week’s shuttering of Gourmet magazine leaves an emotional void in the hearts of many foodlovers, but it doesn’t exactly create a gulf on the newsstand. We counted 36 food glossies clamoring for our attention at the bookstore. Here’s what six of them offer up in their current issues. web site healthy breakfast ideas

Bon Appetit $4.50, 130 pages On the cover: A hunk of unnaturally shiny-looking short ribs.

What to make: Golden Delicious Apple and Cheddar Turnovers with Dried Cherries (page 112.) Why aren’t these on the cover?

Sandra Lee Semi-Homemade $4.99, 106 pages On the cover: Sandra Lee in an orange sweater, holding a cake with orange fondant pumpkins.

Inside: Hard to tell where advertising ends and editorial begins, but then, there’s not much need for ads — recipes specify branded products (Knorr Asian Sides, Simply Potatoes). If you like Bisquick, you’re in luck — we counted six recipes using the mix.

Just a thought: Making the pinecone-dotted centerpiece (page 83) seems like it would take longer than making some of the recipes.

Inside: Everything you ever wanted to know about wine but were afraid to ask. A clever story asks sommeliers to name their bacon, White Castle Slider and coffee equivalents of wine. Travel stories on Oaxaca, French wine country and vineyards by the sea, and a New York chef’s tapas recipes made easier. here healthy breakfast ideas

Everyday with Rachael Ray $3.99, 164 pages On the cover: Rachael Ray in an orange sweater, pushing a wheelbarrow full of leaves.

Inside: Surprisingly few photos of Ray. Plenty of loud graphics, and recipe after recipe after recipe. Octoberfest, tailgating and Halloween menus; a comparison of rice cookers (with four smart, quick recipes); five meals for less than $10, and a main spread on pasta by cookbook author Giuliano Hazan.

This entry was posted on Sunday, May 2nd, 2010 at 11:35 am and is filed under Go See. You can follow any responses to this entry through the RSS 2.0 feed. You can leave a response, or trackback from your own site.