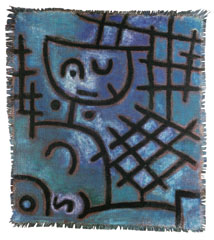 The Ernst Beyeler Collection at the Musée de l’Orangerie, Paris, coheres twenty-six of Expressionist painter Paul Klee‘s masterpieces, primarily from his later work.  The Musée d’Orsay, Musée de l’Orangerie, and Beyeler Foundation collaborated to organize this presentation of paintings and drawings, as a tribute to the late Ernst Beyeler, who passed away in February.  As a gallery owner from Switzerland and a patron of modern art, Beyeler was central to the development of Klee’s career.  Seventeen of the works displayed come from his and wife Hildy’s collection.

Klee, born in Switzerland in 1897, influenced modernist painting throughout the 1900s.  He collaborated with artists such as Vassily Kandinsky and Franz Marc in Italy.  Post World War II, Klee worked as a professor in Germany at Bauhaus and the Dusseldorf Academy.  The Nazi Party deemed Klee a “degenerate” for the modern and provocative nature of his work, forcing him to return to Switzerland.  This trajectory led him to experiment with new techniques and varying styles.

More text, image and related links after the jump…

The pieces in this exhibition demonstrate the principle artistic developments in Klee’s work.  Bold lines, expressive shapes, muted colors, and thick brush strokes represent the style of Klee’s to which Beyeler was most attracted.  Beyeler described the artist’s general transition from delicate shades to pronounced, exaggerated palletes in the last decade of his life as “a move towards a tragic dimension, towards a dramatic vision that includes other worlds.”  When Klee fell ill with a wasting disease, he registered his physical pain through powerful, sophisticated, and often sinister canvases.  He painted in this style until his death in 1940. 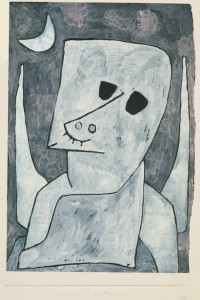 Angel Applicant, Paul Klee, 1939, via The Metropolitan Museum of Art

Both Klee and Beyeler molded 20th century avant-garde style; as the artist once said, “The painter should not paint what he sees, but what will be seen.”
The General Curator of this exhibition is Emmanuel Bréon, Director of the,  Musée de l’Orangerie, who worked alongside Klee experts to create this simultaneously accessible and mesmerizing presentation.  The exhibition will remain open until July 19th, 2010. 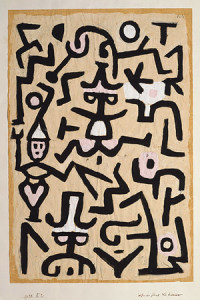 Comedian’s Handbill, Paul Klee, 1938, via The Metropolitan Museum of Art

This entry was posted on Monday, May 10th, 2010 at 11:35 am and is filed under Go See. You can follow any responses to this entry through the RSS 2.0 feed. You can leave a response, or trackback from your own site.