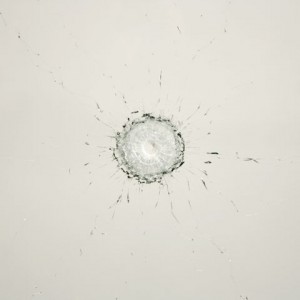 I’d like to draw awareness to all the violence that is happening all over the world.

Currently on view at Haunch of Venison in Berlin is “Das Gift,” an exhibition by Japanese-American artist Yoko Ono. The show features sculpture, sound, film, and new interactive installations guided by instructions. The exhibition’s focal point is “Hole,” a pane of glass pierced by a bullet paired with written instructions to “Go to the other side of the glass and see through the hole.” Spectators then have the opportunity to experience the perspective of both the aggressor and the victim. 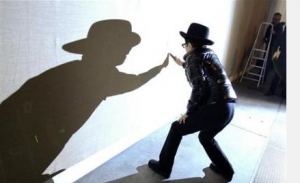 Ono began her work with conceptualism and instruction-based art in the 1950s. In 1964 she published Grapefruit, a book of works incorporating these methods. The current exhibition integrates conceptual, performance and instruction-based art. By using such participatory methods, she elicits empathy from the viewer, allowing them contemplate violence, but also love and healing. 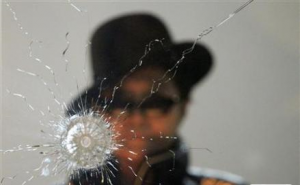 “I ask the people who come and visit the exhibition to bring something of their own personal experience with violence: a picture, or a text, that will then be placed on the gallery wall. In the upper floor, however, there will be a room where one only smiles,” said Ono of the installation. 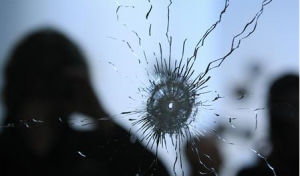 Other works in the exhibition include German helmets which hang from above, each containing jigsaw-like pieces of “sky,” a collection of coats with bullet holes worn by people who were shot, and a sound recording of screaming birds which echos throughout the gallery, providing a hauntingly-violent sonic backdrop. There is also a room upstairs where one is only permitted to smile in front of a camera. The photos taken of the smiling visitors are then projected onto the wall in what Ono calls, “a projection for peace.” Visitors can also take part in the “healing process.” They can work together to patch up a ripped canvas or sweep the remains of a shattered jar on the floor.

The title “Das Gift,” which means “poison” in German, refers to both the German and English meanings of the word. “It’s about the poison of the world which may be a “gift” to us as well. When you expose your memory of pain and violence, and other people look at it, it becomes more positive,” said the artist in an interview with Reuters.

From NPR News, this is ALL THINGS CONSIDERED. Im Robert Siegel.

And Im Melissa Block. For the first time in decades the Supreme Court has heard a major case testing the criteria for the insanity defense. Todays case involved a 17-year-old paranoid schizophrenic who killed a police officer. NPRs Nina Totenberg reports.

Eric Clark was a star athlete, good student and popular kid in Flagstaff, Arizona, until he turned 16 and began deteriorating into more and more bizarre behavior. Sobbing, laughing, hearing voices, and refusing to eat food prepared by his mother, since he thought she was trying to poison him. Today, on the steps of the Supreme Court, Terry Clark described her sons mental state.

TOTENBERG: On a June night in 2000, Eric drove the family truck round and round a quiet neighborhood block with speakers blaring. And when a policeman arrived, the teenager shot and killed him. It was the first time a policeman had been killed in the line of duty in Flagstaff, and the case became an emotional local flashpoint. Still, Eric, then 17, did not stand trial for three years because he was ruled mentally incompetent to participate in his own defense.

When he finally did face charges, his lawyers did not contest his guilt, but asserted that he was guilty but insane and should be committed to the state mental hospital instead of prison. The judge who heard the case concluded that although the boy was psychotic and delusional, he knew hed done something wrong, as evidenced by the fact that he tried to elude police, and that was enough to reject the insanity plea. Arizona Attorney General Terry Goddard summarized the decision this way outside the Supreme Court today. go to website insanity vs p90x

Mr. TERRY GODDARD (Attorney General, Arizona): They found that he had some, albeit sometimes tenuous, grip on reality, but that it was sufficient to know what he was doing.

TOTENBERG: Inside the Supreme Court the question at issue was whether a law as restrictive as Arizonas is constitutional. Four states have no insanity defense at all, and a brief filed by 16 states asserts that if the court were to accept the position advocated by Eric Clarks lawyers, it would put in doubt the insanity statutes in a majority of the states. Clarks lawyer, David Goldberg, told the justices that his client did not receive a fair trial because he was charged with knowingly killing a police officer. But state law barred the trial judge from considering any evidence showing that because of Erics mental state, he lacked the requisite intent.

Justice Breyer, if hes delusional, that means he doesnt know right from wrong, and it can be introduced into evidence that he thought the policeman was an alien. Justice Kennedy, if considering right from wrong gets to the question of whether theres intent, why isnt that sufficient? Answer: because a person can know in the abstract that killing is wrong, but not know he was killing a human being. And under Arizona law, the judge never considered our evidence contradicting the prosecutions evidence on intent. Chief Justice Roberts, what evidence, for example? Answer: the state maintained, for example, that he played loud music as he rode around in order to lure police into a trap, but we believe he played the loud music to drown out voices he was hearing. site insanity vs p90x

Justice Souter, do you think its unconstitutional for the state legislature to say we will only allow a defense of insanity, not anything else, because otherwise everyone will be claiming diminished capacity? Answer: thats constitutional. But when evidence of a diminished mental state will prove insanity, it must be allowed in. Countering lawyer Goldbergs argument was Randall Howe, representing the state of Arizona. He told the justices that under the Constitution the state has the discretion to define insanity and to protect that definition from being undermined with evidence of mental illness that falls short of insanity. As for Clark, he understood right from wrong, and that was enough to qualify him as sane.

Chief Justice Roberts, what about the other prong of the insanity test? He wouldnt have understood the nature and quality of his action if he thought he was killing a Martian. Answer: it would be difficult to imagine a situation where someone knows right from wrong and doesnt know the nature and quality of his act. Justice Ginsburg, would you explain to me how the state fulfilled its burden of proving he intentionally killed a police officer when he believed the officer was an alien? Answer: there was evidence put on that showed two weeks earlier he made statements in school that he had an extreme dislike of policemen. Justice Ginsburg, but he wants to introduce evidence on the other side, showing that those statements were part of his delusions, and hes not allowed to under Arizona law. Answer: mental disease or defect does not disprove intent. A state is free to define insanity as it wishes. Indeed, suggested Justice Alito, states are not required to set any particular level of proof of intent. Added Justice Scalia, the Supreme Court has never ruled that a state has to provide an insanity defense at all.

This entry was posted on Sunday, September 12th, 2010 at 12:45 pm and is filed under Go See. You can follow any responses to this entry through the RSS 2.0 feed. You can leave a response, or trackback from your own site.