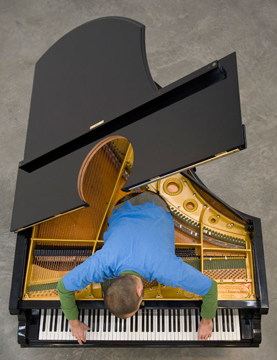 Jennifer Allora and Guillermo Calzadilla’s Stop, Repair, Prepare: Variations on “Ode to Joy” for a Prepared Piano (2008) is the MoMA’s current installment in their Performance Exhibition Series. The duo prepared a Bechstein baby grand by cutting a hole through the center of the piano, rendering two octaves unusable. The pianist stands in the space and leans over the front of the piano to play the keyboard upside down and backwards. While playing the Fourth Movement of Beethoven’s Ninth Symphony, commonly known as “Ode to Joy,” the pianist walks the wheeled piano around the performance space. 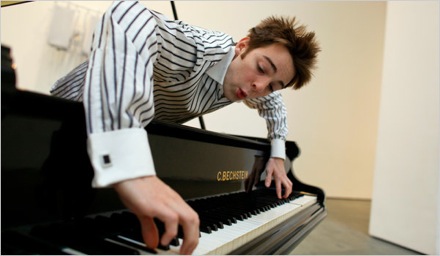 Stop, Repair, Prepare will be performed every hour by one of the five participating musicians.  Each musician approaches the piece differently, in terms of both playing style and choreography. Playing from the opposite side of the keyboard combined with the two missing octaves requires the performers to take some liberties with how they play the piece. Some make use of the empty percussive sound the center keys make, some pluck or hit the strings. Whatever they add to the piece, the lack of the middle octaves is crucially obvious. 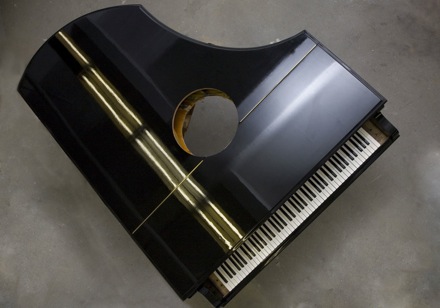 The neatly destructive method of preparing the Bechstein gives the performance elements entirely foreign to typical piano recitals. The pianists’ bodies gain importance—their height affects how well they can lean over the keys, and the added dance portion places emphasis on how they are able to move with the piano surrounding them. The reversal also allows the audience to see every movement of the players’ hands, a view that is never possible when a musician is seated in front of a piano. As the performers move about the space, the direction of the sound is constantly changing, unless the listener follows the piano in its tracks. 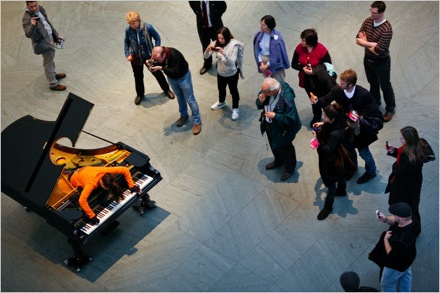 Even in all its alterations, Stop, Repair, Prepare leaves “Ode to Joy” unmistakable as always. Allora and Calzadilla selected the piece for its varied and often political history. One of the most widely recognized pieces of Western music, it was voted the European Union’s official hymn in 1945, and stood as one of Hitler’s favorite pieces of music. The notes coming from Allora and Calzadilla’s impaired piano leave the masterpiece fragmented and hollow, but lend a new meaning to the long-standing symbol of nationalist pride. 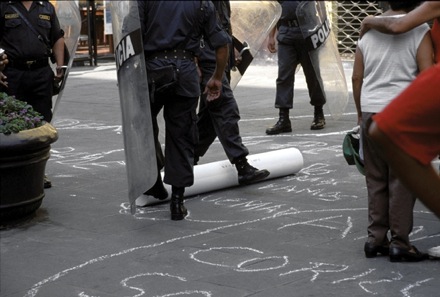 In September it was announced that the Puerto Rico-based artist team had been chosen to represent the US in the next Venice Biennale.  Collaborating since 1995, Allora and Calzadilla often combine sculpture, performance, and video to draw political statements out of common objects. Their public art piece Chalk, a set of 24 giant pieces of chalk set out in a public space, caused some political tension when presented in Lima, Peru in 2002. Protesters that frequented the chalk laden plaza covered the pavement in political statements, causing officials to remove the chalk and wash the plaza.

This entry was posted on Thursday, December 30th, 2010 at 12:56 pm and is filed under Go See. You can follow any responses to this entry through the RSS 2.0 feed. You can leave a response, or trackback from your own site.