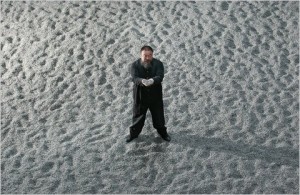 Ai Weiwei and his sunflower seeds in the Turbine Hall of the Tate Modern, via NY Times

Currently on view in the Tate Modern’s Turbine Hall is Sunflower Seeds (2010) a work by Chinese artist and political activist Ai Weiwei for the 11th commission in the Unilever Series.  The work is made up of a millions of small hand-crafted porcelain works each sculpted and painted uniquely by Chinese specialists working in workshops in the small town of Jingdezhen. Hundreds of skilled hands worked together to produce the 100 million sunflower seeds poured into the Turbine Hall’s vast space. 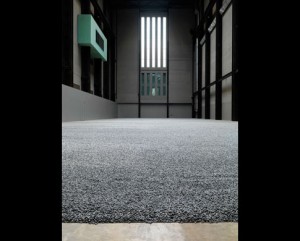 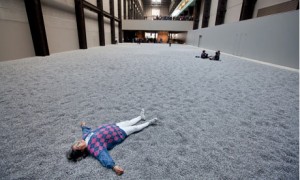 Installation view of Ai Weiwei’s Sunflower Seeds (2010), via The Guardian

Porcelain is often immediately associated with China. In order to create such as work, the artist employed traditional methods of crafting engaging the viewer to ponder the meaning of the “Made in China” explosion and the cultural and historical geopolitics which go along with it. 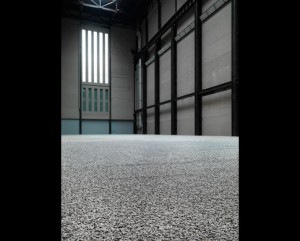 Just days after the exhibition opened Tate Modern prevented access to visitors who wished to walk over the millions of porcelain sunflower seeds due to health and safety concerns over ceramic dust generated by walking on top of the seeds.  The installation is meant to be experienced by walking through the artistically conceived sunflower seeds and since the closing of the installation viewers can only view the exhibition from behind a restricted area.   Viewers can now behold the installation from the Turbine Hall bridge or the viewed closely from the east end of the Turbine Hall in Level 1.  Nevertheless, the scale and vision of the work is commendable despite its unanticipated hindrances. 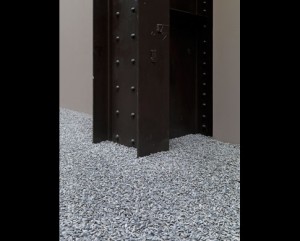 The exhibition comes at the same time as the award of Chinese Nobel Peace Prize laureate Liu Xiaobo. Ai Weiwei was recently placed on house arrest in Beijing on the orders from the senior Communist party officials in Shanghai who wanted to stop him from holding a celebration of the forced destruction of his Shanghai art studio. The officials were reprimanding the 53-year old artist for promising to feed guests 10,000 “he xie” or “river crabs”, a homonym for the word “harmony” in Chinese, as well as talk of a “harmonious society.” 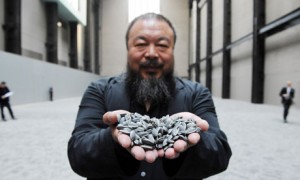 China’s most famous artist, renowned especially for his role as artistic collaborator to the Bird’s Nest Stadium at the 2008 Olympic Games in Beijing, the artist is also a voice of great dissent. Ai Weiwei demands free speech and democracy for the people of China and came to a particular confrontation with the Chinese government over his investigations into the 2008 Sichuan earthquake and the deaths of many school children which followed. As a result, he was severely beaten by the police leading him to suffer a minor brain hemorrhage which had to be corrected with surgery in Germany. 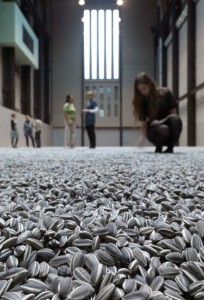 Ai Weiwei’s Sunflower Seeds in the Tate Turbine Hall, via The Independent

This is DAY TO DAY. I’m Madeleine Brand.

In a few minutes, a man convicted of child molestation fights to clear his name.

But first, we all need a little help at times, and here to help us help ourselves is Alex Chadwick and Slate’s David Plotz. They bring us a review of America’s self-help heroes.

For anyone whose job has recently been offshored, here’s an idea: become a guru. We’re not talking about the religious kind. We mean the kind of secular gurus who claim they can guide Americans toward happiness and wealth and whatever else we don’t have enough of. Believe us, guruing is a growth industry. To help us understand what gurus do and which ones might be best for you, we’ve called on Slate writer David Plotz. David’s done some research on a few of the top purveyors of sage advice. Today he’s here to act as our guru guru.

David, welcome back to DAY TO DAY.

CHADWICK: All right, let’s get right to it. Let’s say you’re overweight. Your guru should be…

Dr. PHIL McGRAW (Host): What I’ve wanted you to do is get a self-image and a body image that were congruent so that you felt as good on the inside as you all wanted to look on the outside.

CHADWICK: His sacred text is…

CHADWICK: You trust Dr. Phil because…

PLOTZ: `Do you get the fact that if you don’t do what you need to do, that I will drag your lazy ass out of bed and get you to school, get you to the track to do whatever it is you’ve got to do to get in this game of life and start playing’?

PLOTZ: The bleacher seats at the Get Real Tour, $55.

CHADWICK: OK for overweight and Dr. Phil. Now let’s say you’re broke. Your guru should be…

Ms. SUZE ORMAN (Host): I have to tell you, I think money does make the world go around, not so much in that you need money to be happy, but I’ll tell you, lack of money sure will make you miserable.

PLOTZ: “The Courage to Be Rich.”

CHADWICK: You trust her because…

PLOTZ: She used to be a waitress.

CHADWICK: What she says.

CHADWICK: What she means.

CHADWICK: And Suze Orman will cost…

CHADWICK: OK, next guru. You did not get promoted to VP for marketing; your guru is…

PLOTZ: All your bosses read him.

CHADWICK: What he says.

PLOTZ: `In an interdependent situation, every P problem is a PC opportunity, a chance to build the emotional bank accounts that significantly affect interdependent production.’

PLOTZ: Be nicer and write a mission statement.

CHADWICK: And the Covey cost.

CHADWICK: And you could get the same advice more expensively from…

CHADWICK: All right, the guru hat trick now. Let’s say you are overweight, you are also broke and you did not get promoted to vice president for marketing. Your guru should be…

PLOTZ: “Awaken the Giant Within.”

PLOTZ: You’re weak. I will make you strong.

CHADWICK: He will cost…

CHADWICK: Slate writer David Plotz. David will be back tomorrow with a few more of the gurus Americans find indispensable. You can find his article on gurus at slate.com.

David Plotz, thanks for joining us again.

BRAND: This is DAY TO DAY from NPR News.

This entry was posted on Wednesday, December 29th, 2010 at 12:43 am and is filed under Go See. You can follow any responses to this entry through the RSS 2.0 feed. You can leave a response, or trackback from your own site.