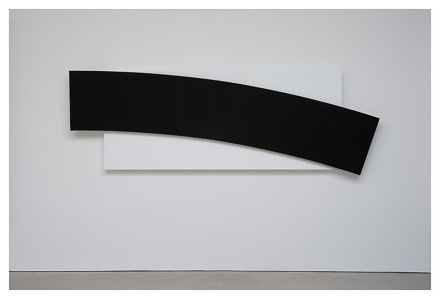 In this series of thirteen new paintings, a new sculpture, and twenty small drawings from the 1950s, all at the Matthew Marks Gallery, Ellsworth Kelly demonstrates his dedication to the concept to which he has adhered for his time as an artist.  Simple in form and color, the new paintings and the sculpture in the ‘Reliefs’ show emphasize the bold shapes and hard edges characteristic of Kelly’s work. The twenty drawings of ‘Black and White Drawings’ from early in his career show a continuity of vision in their similarity to Kelly’s newest works. 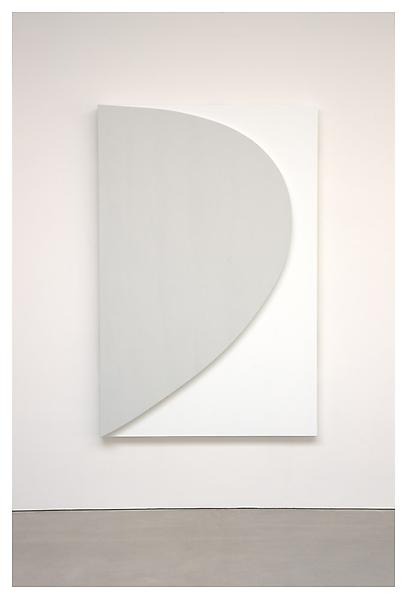 Each of the relief paintings is comprised of two parts: one rectangular canvas painted with many coats of oil paint, and a second shaped canvas placed on top. In most of these paintings, the base rectangular canvas is painted white and the shaped canvas black. The white reliefs invert the palette, with the base being black and the overlay white. Red Curve Relief (2010) and Gray Curve Relief (2010) are the exceptions to the black and white color scheme: a soft gray canvas and a bright red canvas break the stark contrast seen in the other pieces. The unassuming palette gives the pieces an attractive simplicity and grace. 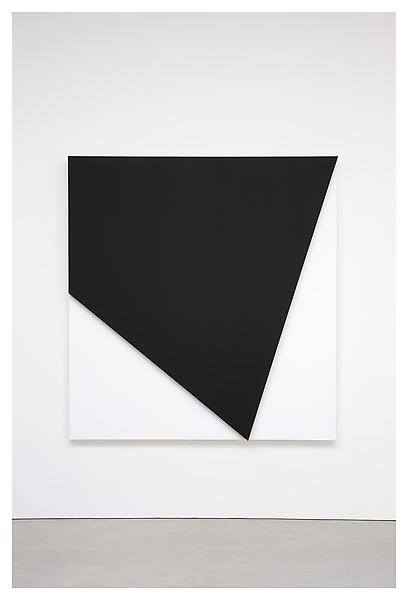 The restriction of colors and layout techniques focuses the pieces’ attention on form and composition. In the middle and rear galleries of 522 W 22 Street are four of the angular pieces. The sharp diagonals Kelly uses give these black and white relief paintings a dramatic motion. Contrasting these firm lines is the curved painted aluminum sculpture, White Curve (2010), in the front gallery.  In the gallery at 523 W 24 Street, the curved reliefs are grouped together. These parabolas and near-ellipses are more suggestive of the human shape, though stripped of all decoration beyond the simple figure. 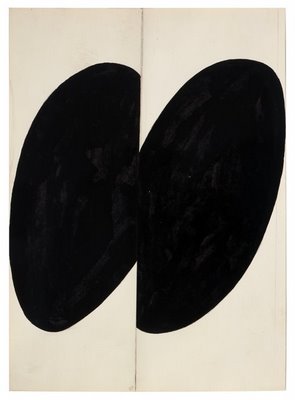 Kelly’s lifelong commitment to a simplicity of form is apparent in the similarities between the drawings from  1954 to 1959 and his newer works. On paper, he maintained boldness in his abstract shapes and distinct coloration—black and white do not fade into each other. The quality of line in his drawings lends itself to an eventual movement into perfecting the lines of his shaped canvasses.

This entry was posted on Friday, February 18th, 2011 at 12:01 pm and is filed under Go See. You can follow any responses to this entry through the RSS 2.0 feed. You can leave a response, or trackback from your own site.