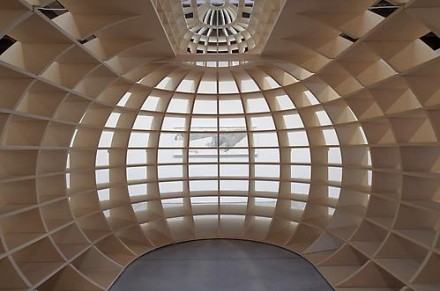 Currently on view at Sean Kelly Gallery is the project Rumba Muerta by artist duo Marco Castillo and Dagoberto Rodriguez a.k.a. Los Carpinteros.  The duo was formed in 1991 (along with then-collaborator Alexandre Arrechea) and the artists choose to work under the name Los Carpinteros in order to renounce the socially problematic ideology of individual authorship.  Instead, the collective name evokes the cultural tradition of skilled artisans—in this case, carpentry.  Indeed, the notion of craft is crucial to their practice, as is that of design.  With Rumba Muerta Los Carpinteros incorporate aspects of architecture, design, and sculpture to create installations and drawings which seek to negotiate the divide between inhabited spaces, social consciousness, and non-functional art objects. 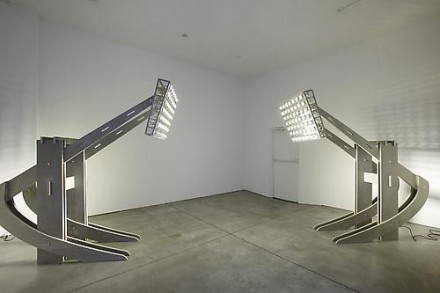 Rumba Muerta is Los Carpinteros’ first exhibition at Sean Kelly since 2008’s Montaña Rusa.  The pair use humor in their work to add levity to otherwise loaded political commentary.  The current show seems to emphasize the notion of transformation, with the title, Rumba Muerta evoking what the curator calls “the dying notes at the end of a bittersweet song.” The monolithic installation, Luces del Estadio del Pueblo (or People’s Stadium Lights) occupies the first gallery.  The work was inspired by the Pan American Stadium, constructed in Havana in 1991.  Between the two light sources one feels akin to a specimen being observed, recalling the notion of being put “on the spot.”  It is nerve-racking to stand under the blinding florescent lights, with their familiar buzz and glow almost recalling the feeling of waiting in a dentist’s chair.  With Luces del estadio del Pueblo, the threat of observation is palpable as the installation acts as an allusion to Cuba’s totalitarian regime. 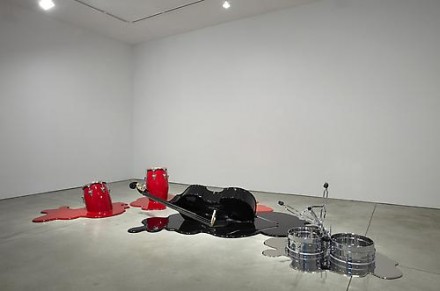 The second gallery houses Cuarteto, a melted salsa band complete with drums, bass, and congas.  The work, while whimsical, literalizes the idea of a “meltdown,” here, a reference to the despondency related to constraint of an oppressive political regime.  The puddles of glossy acrylic formally recall the floor paintings of artist Lynda Benglis.  This reference highlights the artists’ awareness of themselves within an art historical continuum, while the childlike squiggles formed by the puddles point once again to Los Carpinteros’ ease and sense of humor. 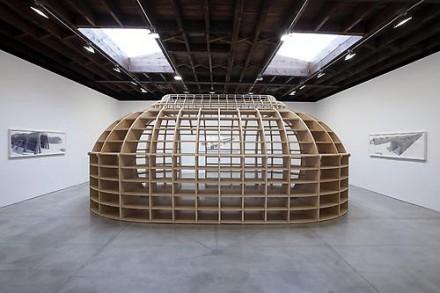 The main gallery houses Túnel Sala de Lectura Ovalada, a massive library devoid of books.  The curator draws a relationship between the work and the notion of panopticon prisons, an 18th century architectural development which allowed guards to monitor all prisoners at once without them being aware of their surveillance.  The structure itself is magnificent in its intricacy and precision.  The installation acts as a successful visual link to the surrounding large-scale drawings on all sides: Marea Roja, Túnel hacia el mismo punto III, and Túnel hacia el mismo punto II (díptico), shown below.  The drawings are realized in watercolor and gray tones, again reflecting the somber social “architecture” of a totalitarian regime. 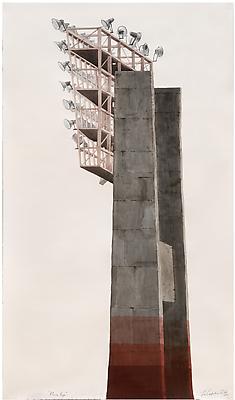 This entry was posted on Sunday, February 20th, 2011 at 4:33 pm and is filed under Go See. You can follow any responses to this entry through the RSS 2.0 feed. You can leave a response, or trackback from your own site.