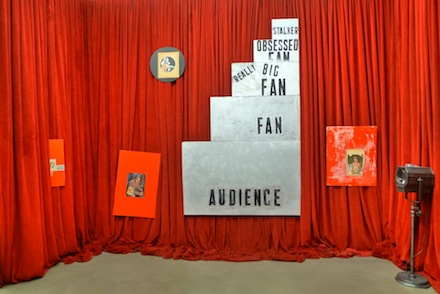 Currently on view at Zach Feuer Gallery, MURK FLUID is artist Mark Flood’s latest showing of work that deals with various items, including notions of corporate structure, celebrity obsession, and human commodification. Born in Houston, Texas, the artist is known widely for his acrylic and spray-paint poster boards that are influenced by the 1980’s punk movement. 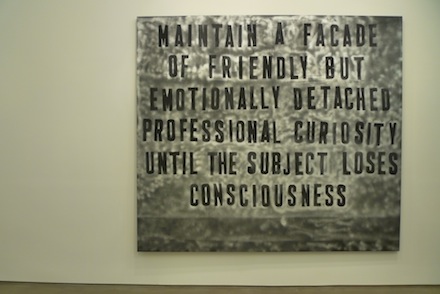 More text and images after the jump…
For the exhibition, Flood displays works of varying media that include large-scale and highly intricate paintings on canvas, readymade-like installations of Batman comic book collections, the aforementioned and typically subversive spray paint signs, and a full-size war barricade complete with barbed wire that doubles as a gallery partition. The space’s rear room is shrouded by a red-curtain and contains, among other mixed media works, a fandom pyramid beginning with “audience” and culminating with “stalker”, and an alarmingly comprehensive assortment of Lindsay Lohan photos pulled from gossip magazines. 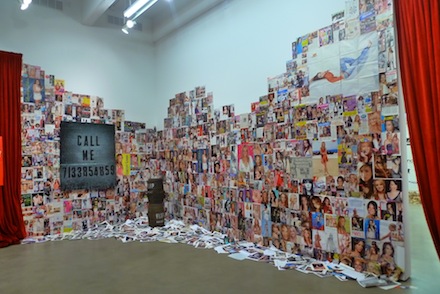 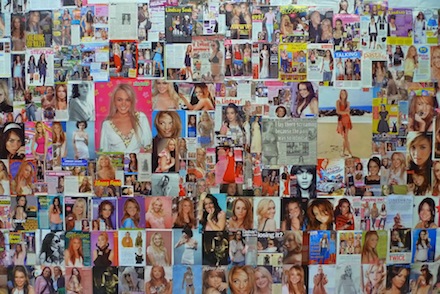 It seems that many of Flood’s works deal to some extent with the act of peeling away at a layer. The artist’s paintings tend to feature a material and textural consistency that eventually gives way to an alternate scene or medium: a green Persian rug pattern opens up to a blue sky, or a white kitchen tile pattern tears, threadlike, over what appears to be gold-leaf. Likewise, the show’s central installation acts as divider between what is on one side an inoffensive wooden frame structure, and the other a display of global corporate logos stamped below a dripping spray-painted banner that reads Civil War Battlefield (also the piece’s title). This all takes place as dried leaves litter the concrete floor and a row of barbed wire crowns the top. Finally, to see the third space of the exhibition, the visitor must take on these notions of removal and visibility to literally pull away the heavy red curtain and discover beyond the threshold a collection of works that document celebrity obsession. Flood compartmentalizes the five-tier levels of “celebrity involvement” and displays collages of celebrity organs marked as “hot and ready” like pies of pizza. 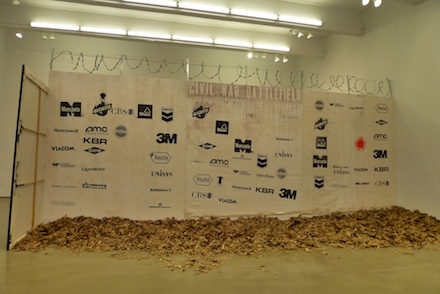 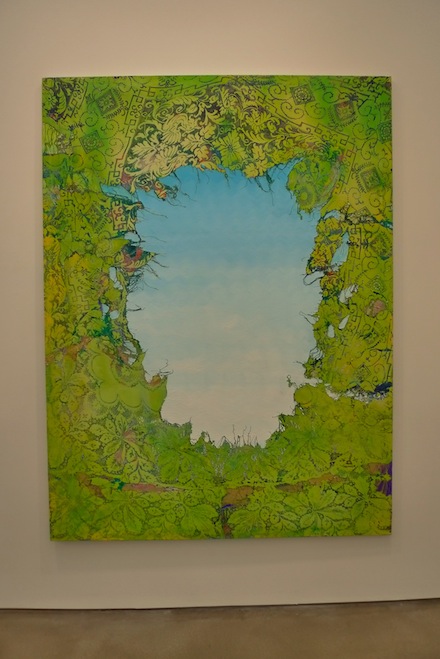 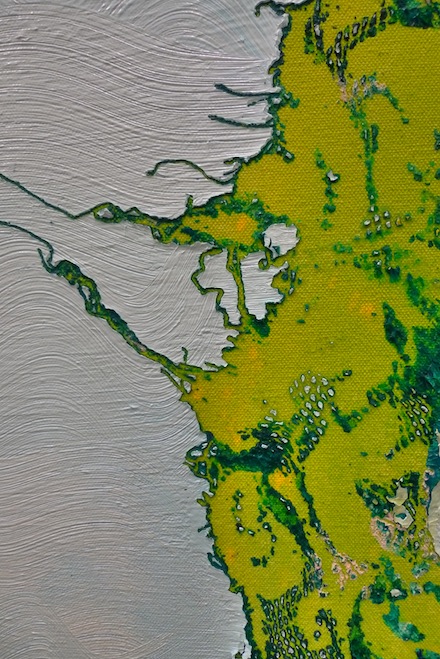 In tandem with this theme of the celebrity’s complete corporal commodification—and making perhaps the exhibition’s most poignant statement—the artist himself has written the gallery’s press release for the show. Serving less as a summary of Flood’s career, the report acts instead as an absurdist companion reader to MURK FLUID.  Referring to the signage works on canvas, Flood writes how the messages exhibit “vestigial traces of entertainment value,” making the pieces aware of their own triviality as signs in an image-saturated culture. Later it is revealed exactly how celebrities’ organs are hypothetically trafficked in order to properly serve the population’s growing obsession with famous figures. 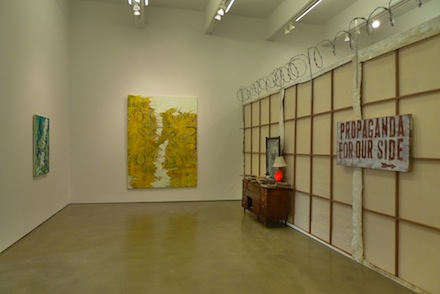 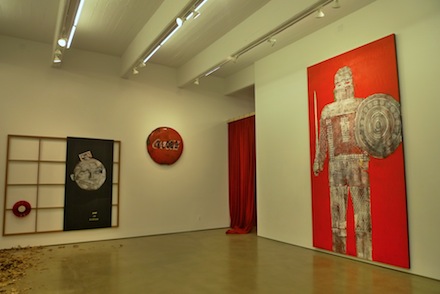 MURK FLUID blankets Zach Feuer gallery with the artist’s work in almost all corners, including the glass front doors and gallery entry. Given the obviously sourced exhibition title, the nature of the press release, and the steady voices projected from the spray-painted text canvases, the artist has succeeded in portraying a unified theme while avoiding straightforward representation. 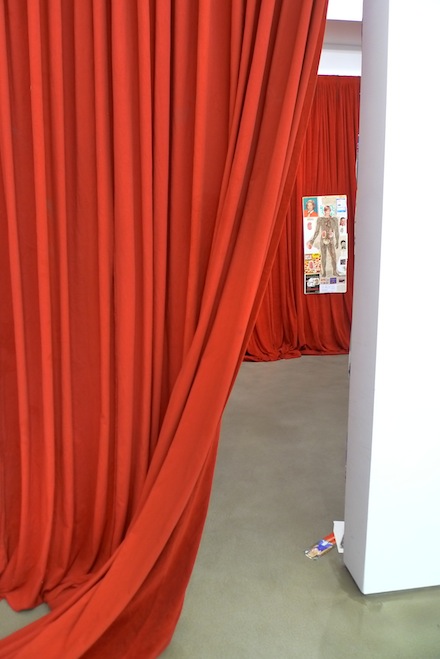 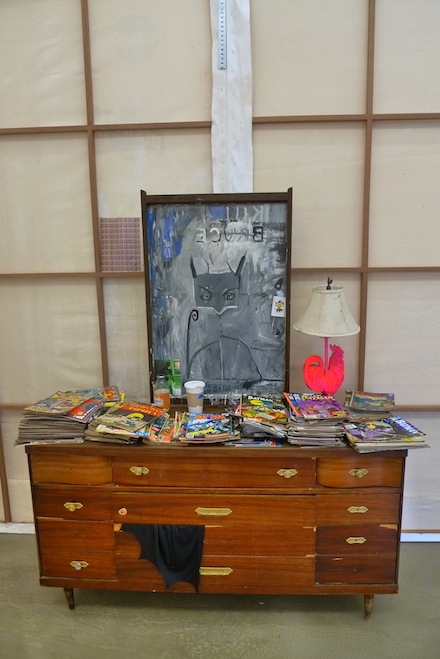 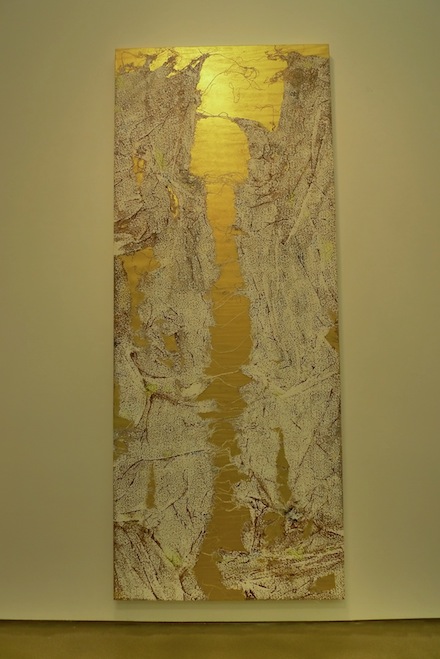 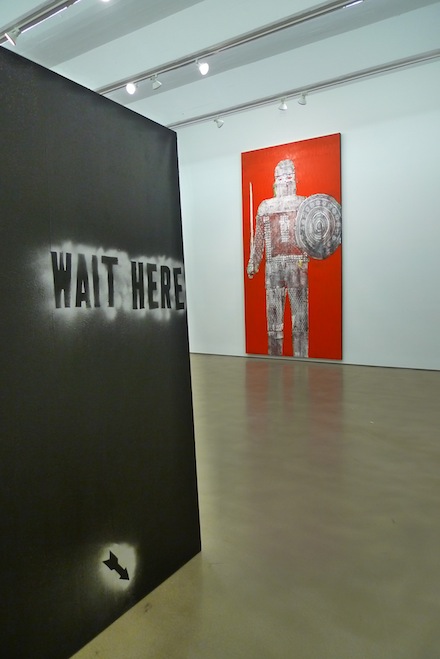 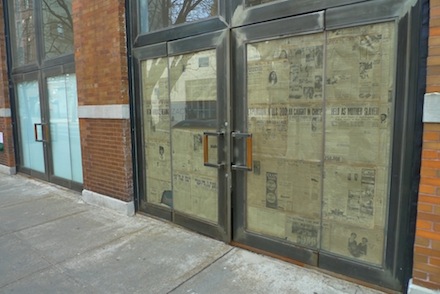 This entry was posted on Thursday, March 24th, 2011 at 12:21 am and is filed under Go See. You can follow any responses to this entry through the RSS 2.0 feed. You can leave a response, or trackback from your own site.