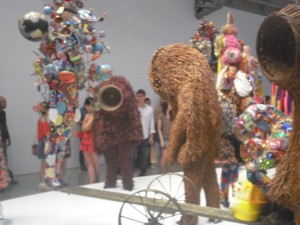 A festive atmosphere opening night at Mary Boone surrounded visitors while they studied Chicago artist Nick Cave‘s parade of bright and exotic soundsuits. Unique hybrid costumes made from a variety of materials, the works combine antique carpets, fabrics, beads, and everyday kitsch objects. Similar to naming the works Untitled, each piece is called a ‘soundsuit;’ various objects, all under the same title. The artist said of his style, “The world is my inventory,” drawing on roots in Trinidad and Haiti, and gathering resources that are no longer used in order to create something new. 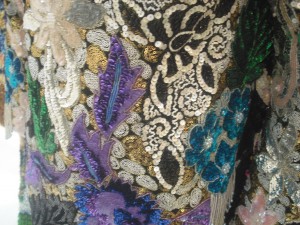 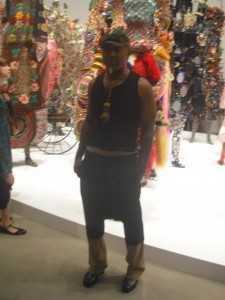 When asked if his work is political, Cave immediately quipped, “Oh totally,” and went on to say, “It depends on how you’re reading it. For example, this piece here is all a rug; something that you walk on, moving towards this vertical, upright position, which you can then change its dynamic, the theme of being stepped on. And that can be translated into how someone feels.” Elaborating on his process, Cave said, “I find a lot of materials at flea markets, especially in New York City. I’m not looking for anything, I just go and I remain open. What really drives me to collect a number of items is really based on impulse. I think objects have power.”

Cave’s show is surprising and ironic, especially considering its timing at the beginning of New York Fashion Week.  Something of a paradox, Cave takes found objects and textiles, and transforms them into new yet timeless works of art—a sharp contrast to the fresh clothes off the runway. Himself a former fashion designer, the show’s  crowd included Parker Posey and Cheryl Pope, and designers Kristina Sparks and Chris Benz, some of which taking a break from preparing their own fashion shows this week. 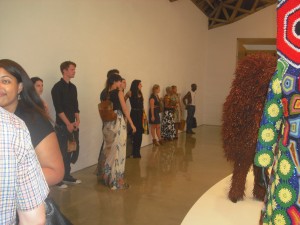 Nick Cave was born in 1959 in Missouri and studied at the Kansas City Art Institute, North Texas State University, and has an MFA from the Cranbrook Academy of Art. Cave lives and works in Chicago and has had recent solo shows at the Jack Shainman Gallery in New York. Cave will be featured in the forthcoming group show RE: Chicago, at the DePaul University Art Museum in Chicago, and has solo shows in 2012 at the Cincinnati Art Museum and the Tri Postal in Lille, France. 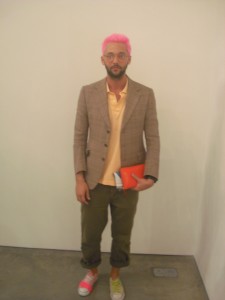 Priced at $10 per month for a subscription that covers five named presenters and the ability to present to 10 attendees, AVflyer is one of the least expensive Web conferencing solutions I’ve seen. It ably handles the basics of presenting content and hosting an interactive meeting, but it doesn’t offer some of the bells and whistles, such as video, that are found in competing services such as WebEx Communications’ Meeting Center. web site microsoft powerpoint templates

I liked the system’s content organization features. After uploading PowerPoint slides to the server, I could share them with other presenters. I also could easily organize other content to accompany the presentation, such as slide notes, surveys and polls. In addition, there’s a dress rehearsal feature to help presenters get the kinks out of a presentation before going live. see here microsoft powerpoint templates

Presenting requires downloading a client application, as does two-way desktop sharing. However, for most attendees, viewing a presentation on the presenter’s desktop requires only a Web browser. Presenters can allow text chat with one interesting wrinkle – attendee chat is always visible to the presenter.

Audiocast offers other AVflyer options that allow for 25-attendee meetings as well as larger meetings on a charge-per-minute basis. There is also a free version for one named user and five attendees. In addition, AVflyer sells an appliance licensed on a per-user basis at $195 per user.

For more information, go to www.avflyer.com.

This entry was posted on Sunday, September 25th, 2011 at 12:07 am and is filed under AO On Site, Art News, Go See. You can follow any responses to this entry through the RSS 2.0 feed. You can leave a response, or trackback from your own site.