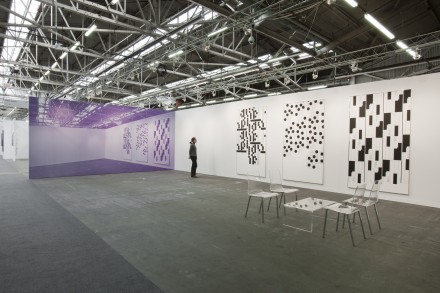 Michael Riedel’s solo site-specific installation of silk-screened posters and wallpaper sold out within the first thirty minutes of the Armory Show preview at David Zwirner’s booth. Art Observed spoke with Riedel that very afternoon in the following interview.

Art Observed: I was really taken by your work and its interaction with systems. I felt that to be a foundational aspect of how you interact with art and what your art-making process is about. How did you get interested or involved with systems?

Michael Riedel: Well, there is a big German writer on systems, and it’s interesting because I found his writing after I produced a lot of works, and then I could say, ‘Wow, this is exactly what is in my work.’ So there is a strong relationship to his writing. I think he is a sociologist… anyway, I think this is something which makes total sense for me—as a product. It’s something that’s ongoing and changing, but also in the same time it is a fixed form somehow. Yet inside there are a lot of interests. You can also touch on the word reproduction; a lot of people like to talk about reproduction in reference to my work, yet there has been a shift in meaning of reproduction—it isn’t about a product anymore, but the process of production. Which means, in the process of producing works, they are only done to produce the next step, to recycle, to transform, to translate. So it’s an ongoing thing. 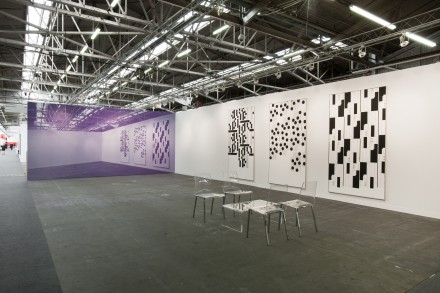 This ongoing thing is more interesting to me than a single work, even though individual works are nice to look at. For example, here [at the David Zwirner booth] these single posters are made from information I sent out as posters and used for invitations—they were really in use. This poster was in A2 format, and was used for a book presentation in November 2009 for Off-Space New Jersey in Basel. I used the poster to layout these works now, because the posters are not meant to be art, because I sent them out and distributed them. Here, it’s the same, it was from one poster again, and it’s already hard to find where it begins and ends [indicating on the artwork]. This poster was the recording of an action I was doing: a robbery in a museum. I was stealing some art, and it was recorded and sent out just like this, like an article.

AO: And you’ve been adding in the circular elements, correct?

MR: Yes, to have this moment—when you are producing something, at the same time you are hiding something. The concrete, are the things which are not produced. It’s a kind of definition of form—when you are defining a circle you are making an inside, but you are also making an outside. Showing something that is empty and at the same time, not empty. It’s a good example with the wallpaper over there, [pointing to his wall-size photo of the Zwirner booth] and a lot of people don’t recognize what is a really great paradox that I’m showing something on a wall which is empty in the image. It shows emptiness within the documentation, which is a character of documentation, there is always something missing. Or something lost in the transport. 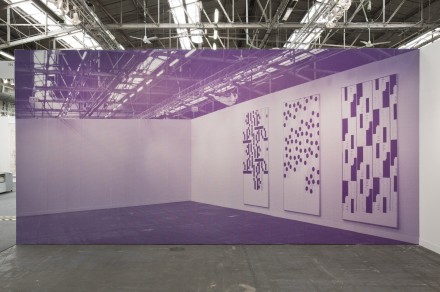 AO: I’ve always enjoyed that aspect of reenactment in your work; like when a memory is recalled at any given moment—it’s not fixed, it’s mutable. Memory is as generational as anything else, and it’s always a rehashing or restaging. And that restaging allows for an opening like that [wall piece] to exist.

MR: Or to change the color, it comes back in a different way. We’re going to wallpaper different colored wallpaper on top of this one tonight, during the opening for the public. Not necessary to do, but maybe the best reason to do it. 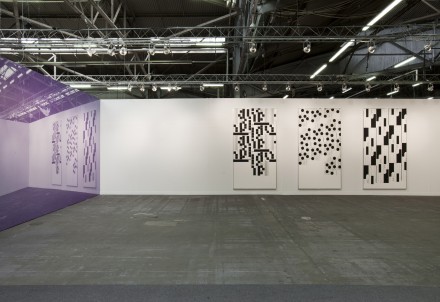 AO: Do you have a background in design or graphic arts?

MR: That’s what a lot of people ask me, but I have to say no. I’m really naïve doing these graphics. Maybe that’s why a lot of graphic designers like these works. Mainly, these solutions for arranging come from having to place a lot of text on a small format of paper, which is why I use columns and things like this. A painter would work with paint, of course, but my material is, first of all, communication and information. And this comes naturally for graphic design.

AO: Even with the use of text and coded information you are still interacting with design as an artist within a system, and ultimately you’re playing in that system. Art is a behavior, and at it’s best it’s about play. Some of the best design is also about that, because play allows for creativity to come in the most.

MR: There is also the text, which normally carries a meaning. When you see text there is always a meaning involved. Searching for that is the normal reaction to text. And of course, this is a nice material to work with when you want to produce meaningless things by using the main position for meaning; to use the main design for meaning to create something meaningless. At the same time, it’s not blind text, I can talk about this text, and there is a real action behind it, it’s not something only done for the design. There is a reality behind it. In this poster here, this design for Changing Modern was just a list of works that were done and works that were still undone. It’s something which I’m using, also. It’s good to have it already, but also good to make a work of it. The information as the image.

AO: I was curious about your last show at David Zwirner, The quick fox jumps over the lazy dog. That is the standard sentence for font formatting—can you talk about that a little?

MR: It was the perfect title for me, because you’re not supposed to read it and look at its content. Because the text is only about form, not content. And that’s what art is about—about form. It was a perfect choice. 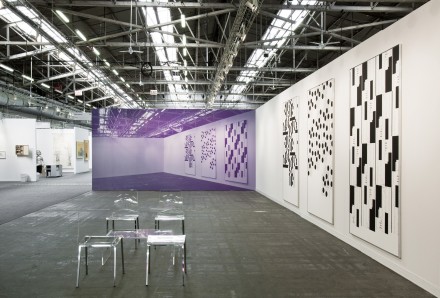 AO: Did you ever consider working with Lorem Ipsum? Do you know about that?

MR:  Yes, and In fact, there was an article in a French magazine that was titled ‘Lorem Ipsum,’ not by me but by the critic who wrote it. Lorem Ipsum is also nice.

AO: Lorem Ipsum has a whole history; it’s an actual text, an ancient text in Latin. Whenever you use a lorem ipsum generator to generate copy, it comes from that text. I’ve used the generator for my own projects quite a bit and pages can be generated from this manuscript. And you think it’s just copy, but if you could read Latin it would mean something.

What’s coming next for you after this project?

MR: My first museum show, in June. In Frankfurt, at the Kunsthalle. It’s a retrospective so I’ll be collecting older works and creating some new works and I can give you the title, which is already something. I’m not sure if you’ll get it—do you speak German?

MR: It might be difficult to get the humor, since it’s based on German grammar. Do you know Texte Zur Kunst? The famous German magazine? I think they’re getting old fashioned now. So, I turned around texte from plural to singular text, and turned kunst from singular to plural, kunste. So, now it’s Kunste Zur Text. Which is a good title, and a good background for my works, because the whole museum will be covered with this text.

AO: I was always interested in the grammar of German, particularly in the fact that it’s so compound.

MR: In German, there is play within all the meanings. Misunderstandings are great—there isn’t so much pressure to do the right thing. Being always wrong gives freedom.

This entry was posted on Friday, March 9th, 2012 at 7:24 pm and is filed under AO On Site, Art Fair, Art News, Go See, Interview. You can follow any responses to this entry through the RSS 2.0 feed. You can leave a response, or trackback from your own site.

One Response to “AO On Site Interview: Michael Riedel on His Solo Installation at David Zwirner Armory Show Booth, March 8–11, 2012”