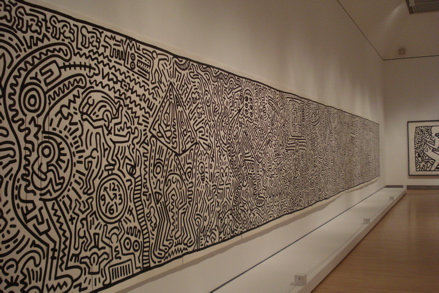 On now at The Brooklyn Museum is ‘Keith Haring: 1978-1982.’ This dynamic multi-media exhibition provides a comprehensive survey of Haring’s early work. Best known for his “Crack is Wack” landmark mural, “The Radiant Baby,” and other stylistically similar cartoons made with thick lines of black Sumi ink, Haring also produced work in other mediums such as film and print. This show is comprised of 155 works on paper, multiple videos, and more than 150 personal objects of Haring’s, including notebooks, flyers, posters, subway drawings, and photographs; all of which, put together, capture and encapsulate the excitement and energy of New York City’s club and art scenes in the 1980s. The exhibition narrates viewers through the period in Haring’s career immediately following his arrival in New York City through the establishment of his studio space and the beginning of his interest in street art. 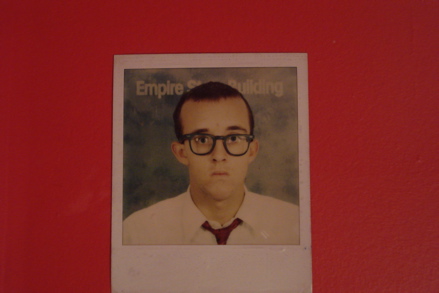 Entering the Special Exhibition space on the fifth floor of the Brooklyn Museum, viewers are greeted by the sounds of 1980s pop tunes emanating from the back of the gallery. The front room is painted red with a large work on paper hung on the wall opposite the entrance. Untitled (1982) looks like a cartoon depiction of a religious ceremony, complete with seven of Haring’s iconic dog heads melded into one large creature with five of his human dancing men silhouettes bowing before it. Situated to the left of the entrance, complementing this massive piece, is a glass-encased series of Polaroids taken by fellow artist and friend Kenny Scharf. The photos are portrait shots of Haring from the shoulders up; each one looks marginally different from the next in expression, color, and tone. The set of photographs illustrate Haring’s willingness to participate in all aspects of the art-making process; to be a subject as well as a maker of art. 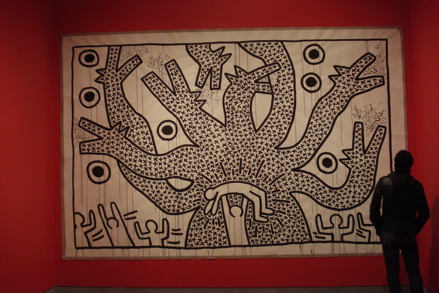 Born in Reading, Pennsylvania, Haring grew up in Kutztown with his parents and three younger sisters. His father Allen was a cartoonist and no doubt fueled his son’s early interest in cartoons and illustrations. Haring’s formal art education commenced in 1976 at The Ivy School of Professional Art in Pittsburgh, where he studied commercial art for two years. After becoming disenchanted with the commercial art industry, he entered the world of Fine Arts and became deeply enamored with the Abstract Expressionists. In 1978, at the age of 19, Haring made his career-defining move to New York City, where he enrolled at the School of Visual Arts and immersed himself in graffiti art, music, and many aspects of 80s club culture; all of which are reflected in his artwork. In 1982, he established friendships with fellow artists Kenny Scharf and Jean-Michel Basquiat; the following year he befriended Pop artist Andy Warhol, whose influence would later play a significant role in the success of Haring’s career. 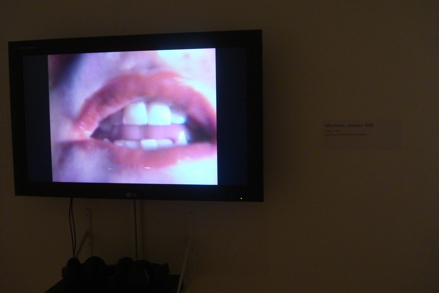 During his time at the School of Visual Arts, Haring became interested in film; a medium he worked with early on but abandoned later in his career. There are a few of these early videos scattered throughout the show. Painting Myself into a Corner (1979), a 33-minute video in which Haring paints the floor of a room while nodding along to songs by the band Devo, embodies the hallmark Haring note of humor. His passion for painting is evident in his body language and there is something reminiscent of Jackson Pollock about the way Haring stands over the floor, bent at the hips, gracefully moving his brush to the music. 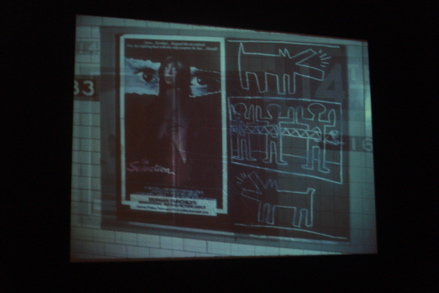 The narrow middle room, situated between the front and back of the gallery, functions as an 80s time capsule with loud music, videos, and photographs of Haring, along with flyers for events that he organized and participated in himself. A video of Haring’s subway drawings, shot by Tseng Kwon Chi, is projected onto one of the walls. Chi, a photographer and friend of Haring’s, recognized the artistic and cultural value of his subway drawings and photographed them over a one-year period before composing this slideshow. Another notable piece in this room is the photo series taken by Joseph Szkodzinski; a downtown Manhattanite known for capturing the raw essence of the New York City club scene with his camera, and who took many photos of Haring. In this particular set, Haring and friends are seen dancing at Club 57 and other quintessential 80s hangouts. 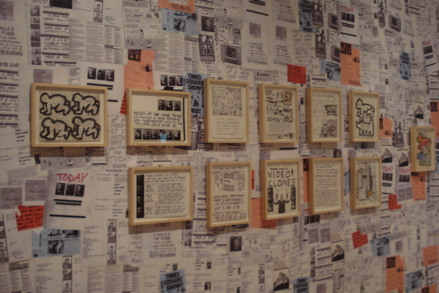 The backroom of the gallery contains iconic representations of Haring’s street art. Many of these pieces are posters that were originally displayed in the New York City subways and are featured in Chi’s video. The work, Untitled (circa 1980-85), a collaboration between Basquiat and Haring, is an actual plywood board taken from the street that the two artists covered with paper and spray paint. Most of the pieces in this section of the exhibit are white chalk on black paper and have a simple composition, usually containing a single figure with little or no background details. These pieces come close to what Haring became famous for and have an expressive and spontaneous quality to them indicative of the context in which they were produced. 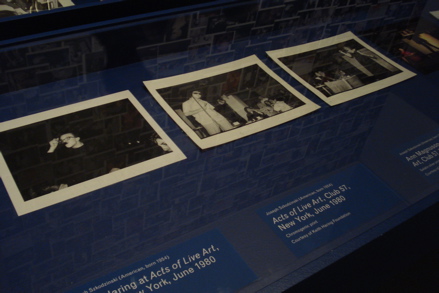 The last stop at the show is a small side room containing two tables and a wall section covered in electronic drawing devices. These gadgets allow the show’s attendees to actually participate in the show and pay creative homage to Haring.

The exhibition was curated by Raphaela Plato and co-organized by the Contemporary Arts Center, Cincinnati, and the Kunsthalle Wien. 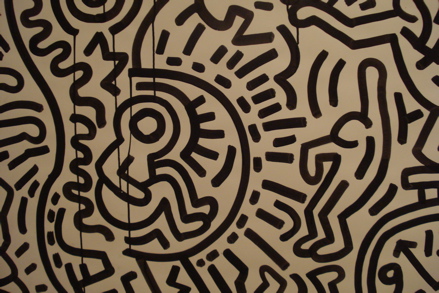 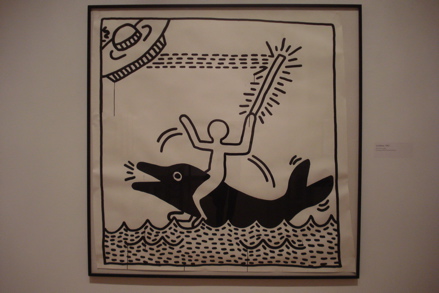 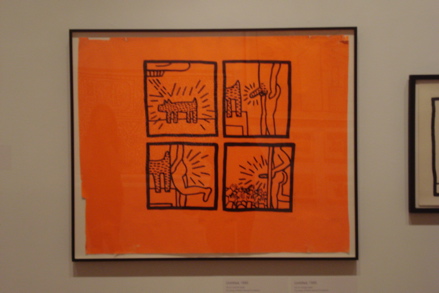 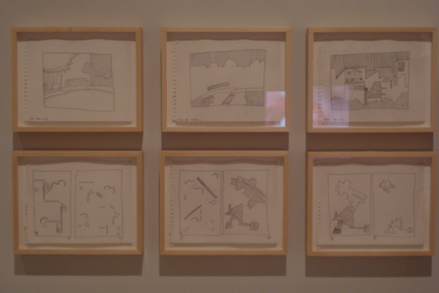 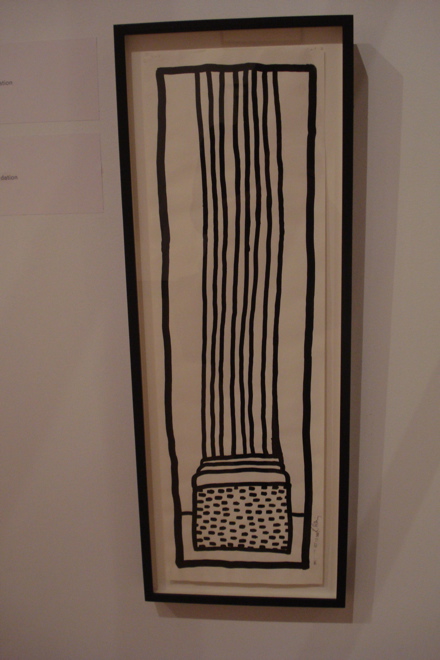 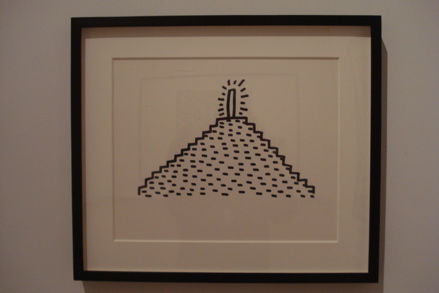 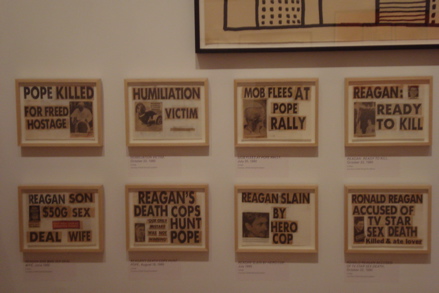 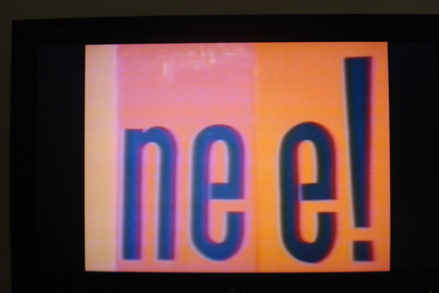 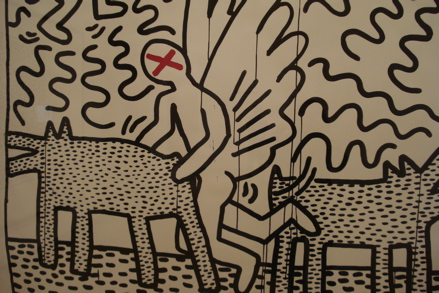 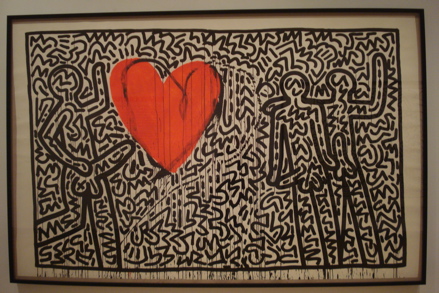 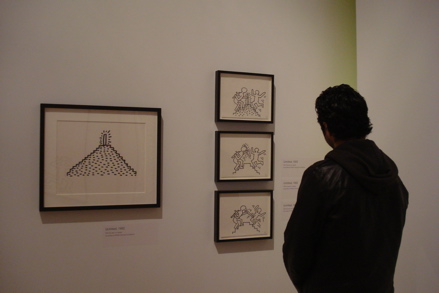 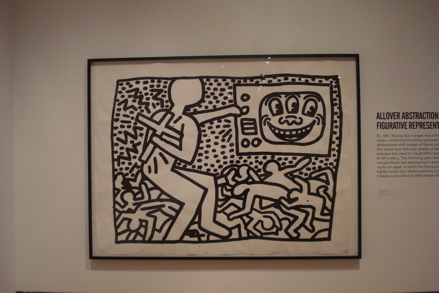 This entry was posted on Sunday, April 15th, 2012 at 11:24 am and is filed under AO On Site, Art News, Go See. You can follow any responses to this entry through the RSS 2.0 feed. You can leave a response, or trackback from your own site.