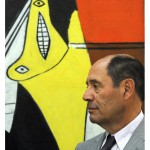 Bernard Ruiz-Picasso, Pablo Picasso’s grandson, announced that the Picasso heirs have consolidated authentication efforts in the formation of an organization under the direction of Claude Ruiz-Picasso. Previously, due to the large number of Picasso’s heirs, authentication was difficult. The Picasso Administration is based in Paris.

Read the article via The New York Times

This entry was posted on Saturday, October 6th, 2012 at 11:19 am and is filed under Art News. You can follow any responses to this entry through the RSS 2.0 feed. You can leave a response, or trackback from your own site.