London + Löwenbrau – “Thomas Houseago: I’ll be your Sister, Special Brew and The Mess I’m Looking For” at Hauser & Wirth, Through October 27th, 2012 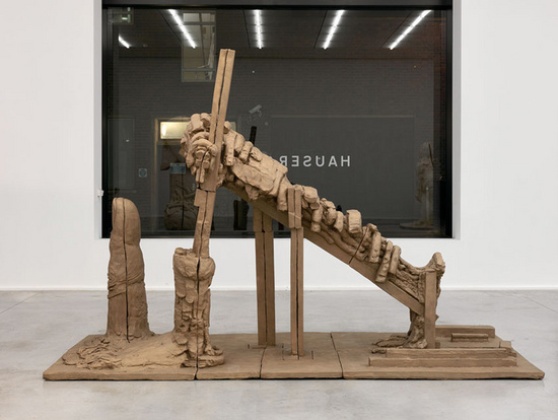 Hauser and Wirth just closed three coinciding shows of Thomas Houseago in order to mark the artist’s representation with the gallery. Two were held in London and one in Switzerland: Saville Row South gallery displayed Special Brew; Saville Row North gallery exhibited I’ll be your Sister;  and Löwenbrau, Switzerland showed The Mess I’m Looking For.

Thomas Houseago was born in 1972 in Great Britain and currently practices in Los Angeles. His 3D constructions have a strong affinity with Cubism, whereby the artist represents an object from a variety of perspectives resulting in a distorted display of greater physical depth. The unrefined beings that are omnipresent in Houseago’s vast portfolio echo Henry Moore’s figures in a more visceral manner. The somewhat intricate, yet unfinished appendages that are detailed in the works pay homage to the Renaissance and old masters such as Da Vinci, yet their cubist take brings them resolutely into the future. 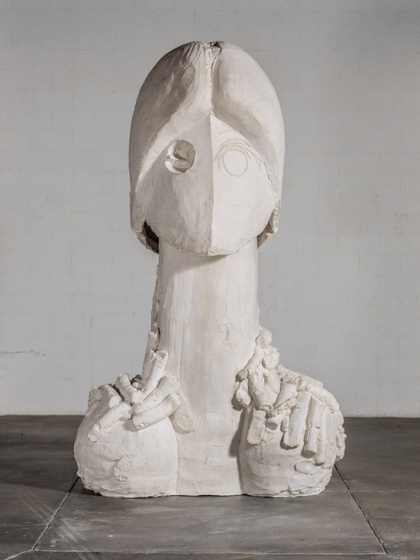 Thomas Houseago, Portrait Column I, (2012) at I’ll Be Your Sister exhibition 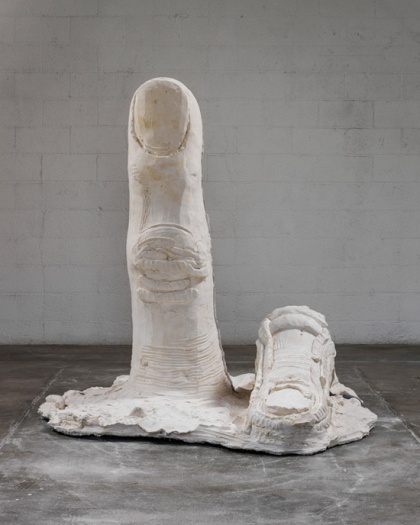 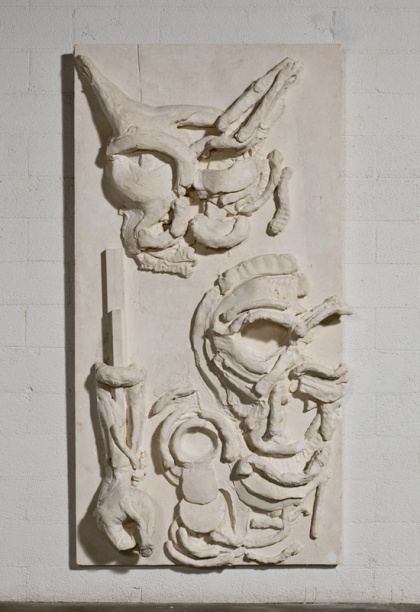 All three shows exhibited Houseago’s uncanny yet beautifully intriguing sculptures and wall panel reliefs. His work begs for inquisition through the array of distorted beings that comprise his freestanding works. Fragments from these beings and what appears to be human remains (fingers, facial features etc.) make up his panels, in turn evoking questioning from the viewer. There is undoubtedly an element of preserved life and a strong reference to nature through the raw, obvious processes that go into the construction of such objects.

Special Brew consisted of six freestanding sculptures and four wall panels that are each constructed with humble, natural elements such as hemp over an iron rebar skeleton before eventually being coated in plaster. The markings from the sculpting process are still visible beneath the objects’ ‘skin’, providing the onlooker with information into the ‘life’ of piece they are observing on a massive scale. Some that measure up to three meters in height are given greater authority and resonance by the introduction of a pedestal that further accentuates their dominance. 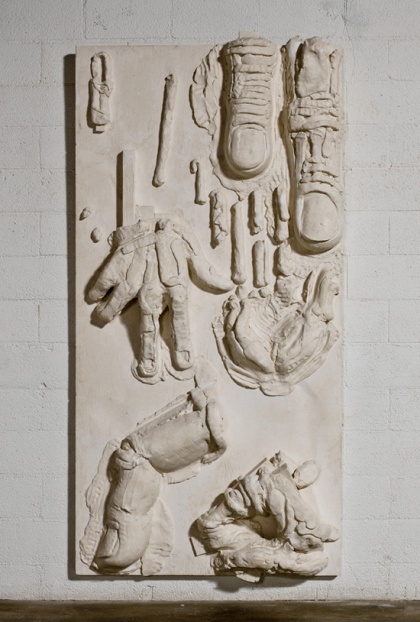 The recurrent presence of human fingers lingers uncomfortably around the room, wiggling like worms along the walls and provoking the galleries visitors with suggestively rude gestures while all the while Houseago’s other ‘life forms’ appear to gaze with disapproval as artificial light beams through socket-like holes intensifying the atmosphere of the show. 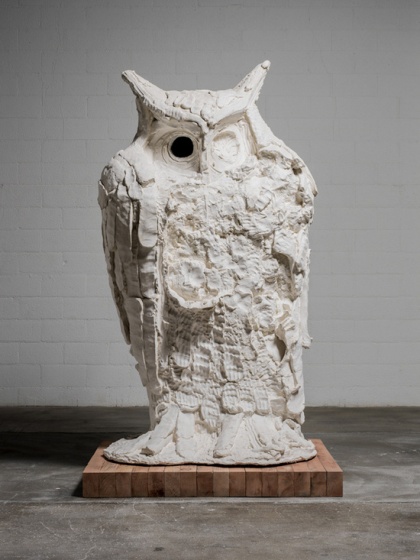 I’ll be your Sister

Saville Row’s North Gallery conceded with much of the same: I’ll be your Sister exhibits similar ominous and foreboding figurines. However, the exception to the sinister concessions is that of the Sitting Woman – she huddles in a poignantly humble stance in what appears to be a self-embrace, cowering from the menace evoked through the circuitous works. The crude markings hint at endearment rather than trepidation bringing the heightened sense of alarm in the space down a notch. 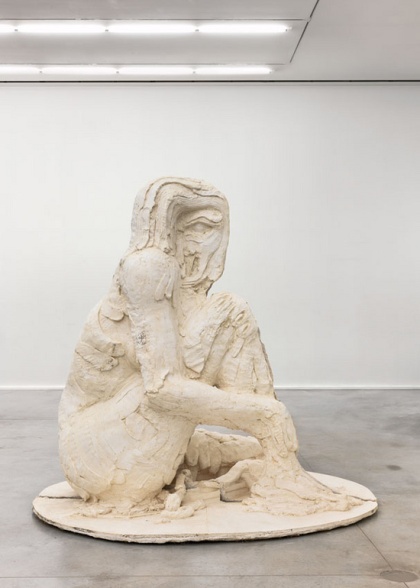 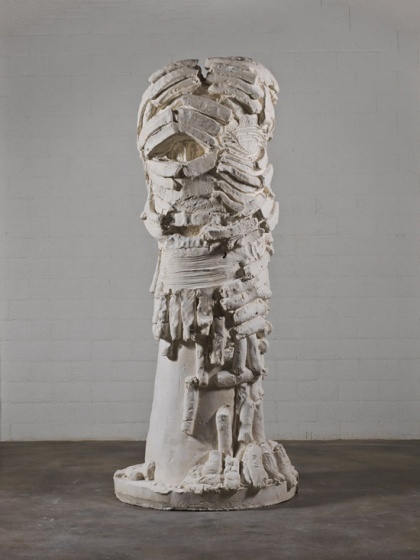 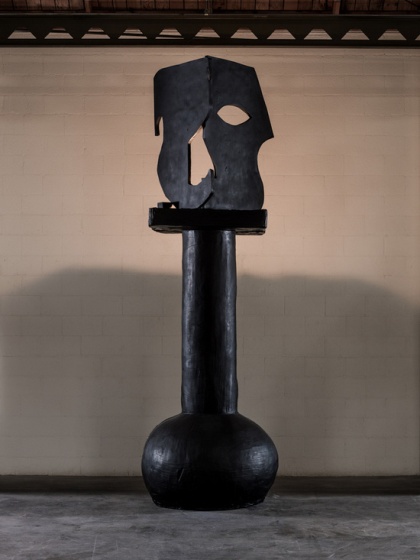 The Mess I’m Looking For 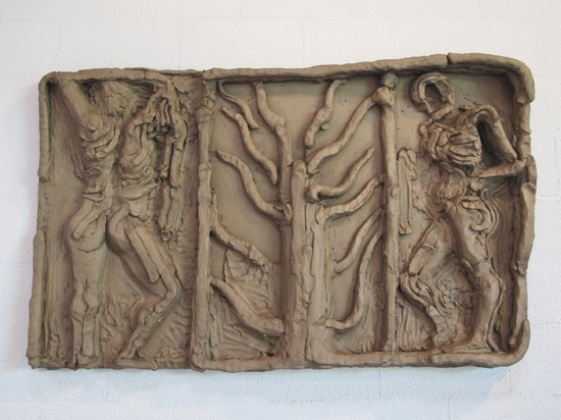 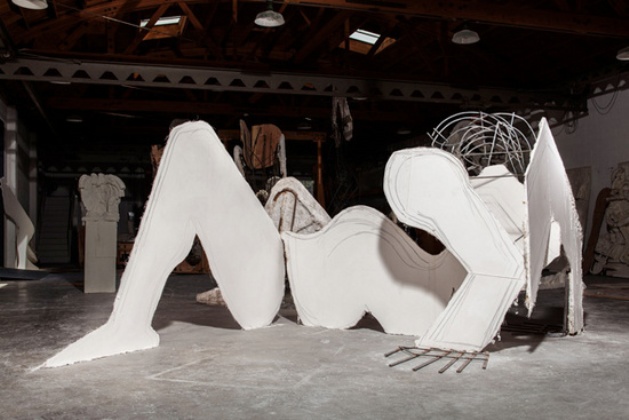 Monumental Woman Reclining I (Pour) dominates the Löwenbrau show in Zurich, occupying over five meters of the galleries’ floor space. Unlike the other pieces that comprise the trilogy, this very literal monumental woman pushes the boundaries of sculpture even further, successfully departing the series away from the old masters of the Renaissance and firmly securing it to the ground of the future. The 2D planes of the figure are secured upright, again with an iron rebar skeleton, forcing the flat surfaces to emit the illusion of being sculptural – toying with the very essence of sculpture. 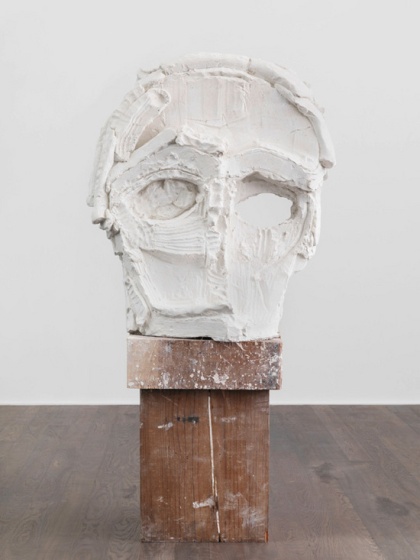 The poise of the figurine once more ensues in a more tender atmosphere compared to much of Houseago’s other work. The graphite sketches that are still visible, however, draw the series together in a raw, unwieldy, yet simultaneously delicate manner. 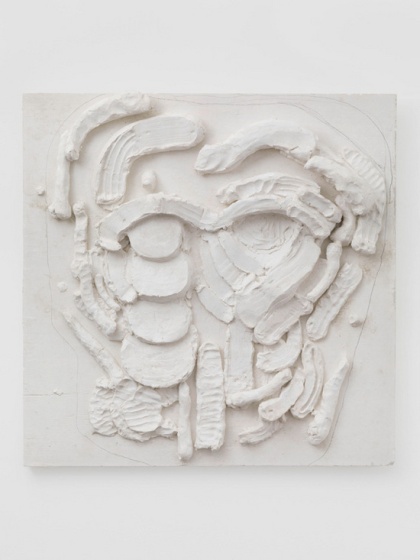 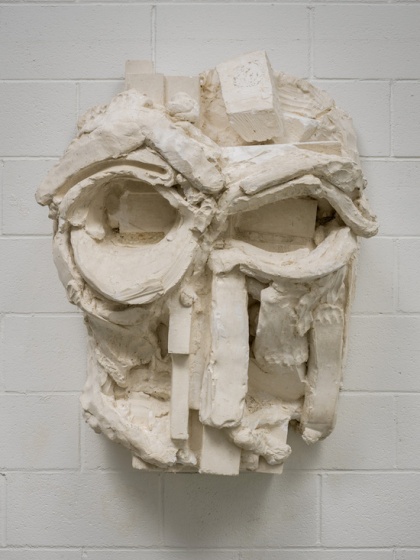 This entry was posted on Monday, October 29th, 2012 at 2:01 pm and is filed under Art News. You can follow any responses to this entry through the RSS 2.0 feed. You can leave a response, or trackback from your own site.