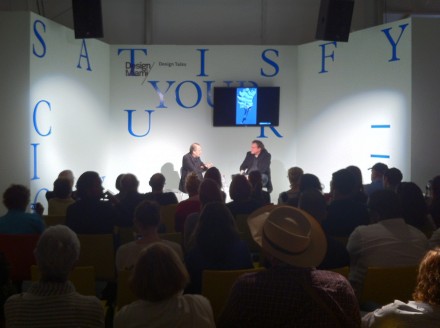 All photos by G. Hansen for ArtObserved

A Design Miami conversation between Vito Acconci and Mitchell Joachim, both artists and architects often at the verge of one discipline or another, focused on Acconci’s origins in poetry and art and transition into architecture.

Acconci’s collaboration with the architect Steven Holl was a case in point, and one of Acconci’s first projects in the realm of architecture.  The re-façading of the slim exhibition space into a series of rotating panels produced a “quasi public space”.  “You had to expand it, open it up,” said Acconci.

Acconci described the design process with Holl as staggered, as Acconci’s interest was in creating utility, and Holl’s in creating art: “Each time we met Steven would bring something that resembled projects of mine and I would bring things that resembled his. Until we stared with hinges, with ideas that we could have in common.” 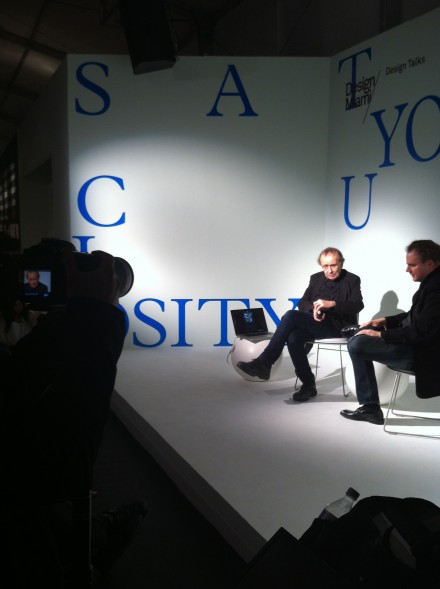 Subjects of conversation: nomadic design, low-budget projects, genetic technology, unfinished projects (“a project doesn’t need to be so incredibly completed. Otherwise why would you need to go in it?”)

When asked about literary influences, Acconci cited Faulkner.  “I was interested in Faulkner because he had such a hard time putting a period on the end of a sentence.  As if putting on the period was equivalent to dying.”

This entry was posted on Monday, December 10th, 2012 at 1:55 pm and is filed under AO On Site, Art Fair, Art News. You can follow any responses to this entry through the RSS 2.0 feed. You can leave a response, or trackback from your own site.