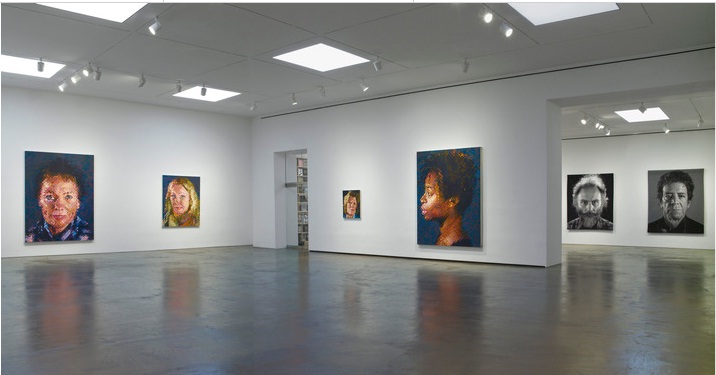 Pace Gallery in New York is home to Chuck Close’s first gallery show in the city since 2009. The gallery has represented Close since 1977. This latest exhibition features some of the artist’s newest pieces such as Cindy (2012) (a portrait of photographer Cindy Sherman) along with some of Close’s older works.

Since the beginning of the artist’s career, his primary concern has been with portraiture. His paintings almost exclusively feature close ups of faces, which retain a unique intimacy within not only the visual content and “closeness” of the images but within the context from which the aesthetics arise. Each of the works in question is derived from either family relations or friends – Close takes a photograph of his desired subject, and from there he splits the face into a grid to coincide with his canvas, which he individually paints from each of these self formed ‘pixels’ established from breaking down the image. The affinity he holds with his subjects seems to help him inject character and exuberance into the works as the subject’s poises and postures are direct and calm. 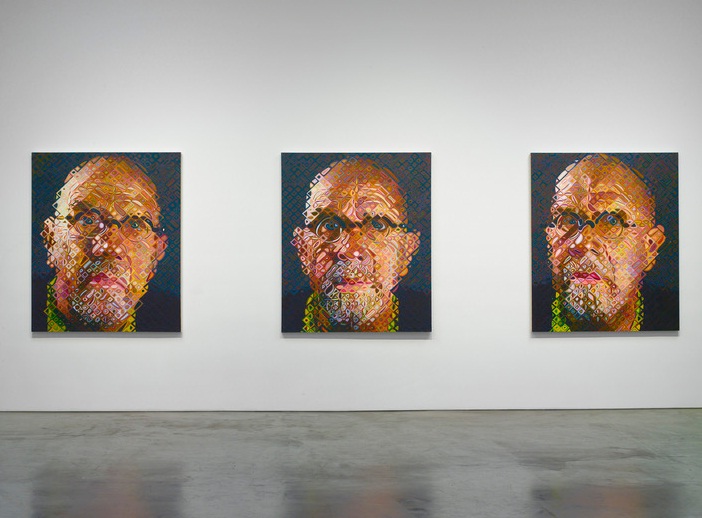 This method, which has remained consistent throughout Close’s career, took on a life of its own when he suffered a near fatal spinal artery collapse that left him debilitated and paralyzed from the neck down.

Close has been diagnosed with prosopagnosia, or face-blindness. He cannot remember people by their faces, no matter how close the relationship. From a note he wrote, to reflect back on advice he would have given himself at age 14: “Virtually everything I’ve done is influenced by my learning disabilities. I think I was driven to paint portraits to commit images of friends and family to memory. I have face blindness, and once a face is flattened out, I can remember it better”. 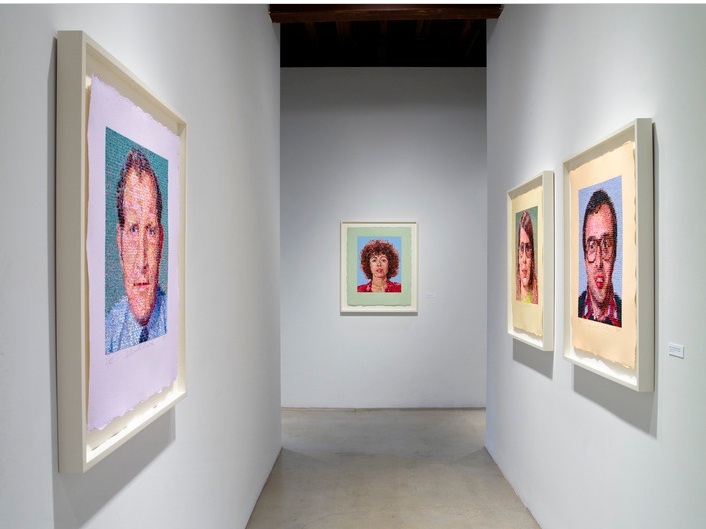 Close may have remained physically paralyzed and unable to walk, but emotionally however, Close was anything but impaired. Using sheer will power and internal strength, Close was able to teach himself to paint again using a new way of both thinking and physically doing things. He began using his previously existing grid method as more than a methodology and decided to conceptualize his meticulous method of working by making these lines visible. He refined each of his “pixels” into simple shapes lines that collectively built up a, somewhat blurred, but nevertheless photo-realistic portrait.  With a specially-designed easel for his canvas that moved and rotated at the push of a button and paintbrushes anchored to his arms, Close was able to retain his practice although his work began to take on a new methodology. 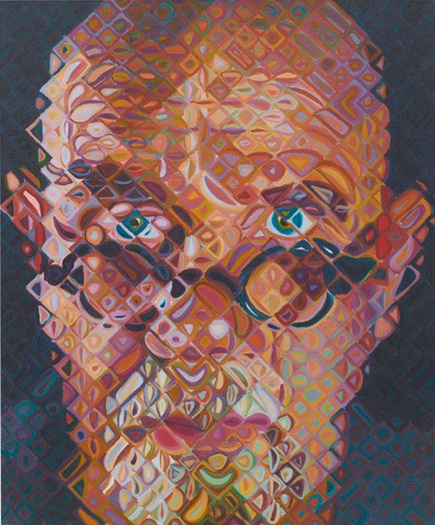 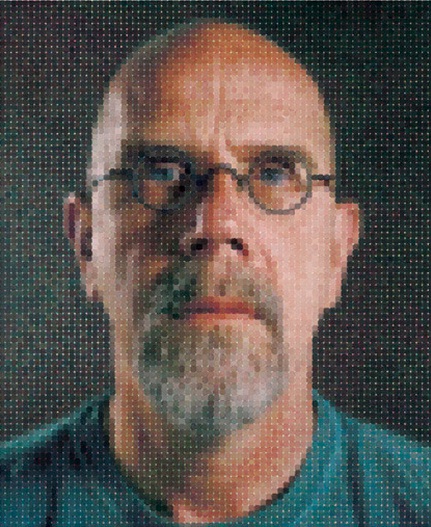 The grids that had previously been the backbone to helping Close realize his goal of visual perfection suddenly were thrown into the foreground of his images. Each individual contortion of paint was meaningless when it not juxtaposed with another; as a unified composition, they formed a single image. In light of the new show at the Pace Gallery, the artist has unveiled a brand new technique, that although meticulous and strained as ever, leaves more room for experimentation. 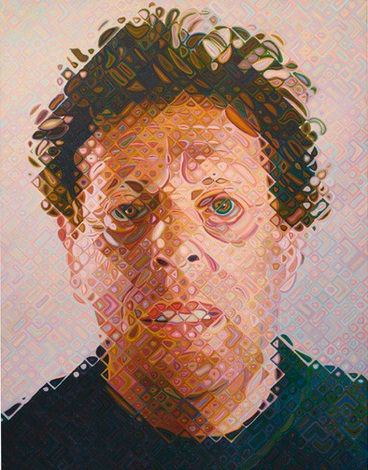 One of his latest images, Cindy, is comprised of a “watercolor print”; a term Close has coined after individually scanning around 1400 of his own watercolor markings onto  computer and then painstakingly digitally arranging them into his standard grid formation so that he is, quite literally, painting digitally. The results are as breathtaking as ever, and the contradiction between these almost handcrafted images and the glossy, digital, printed finish of the finalized piece posits a new process. 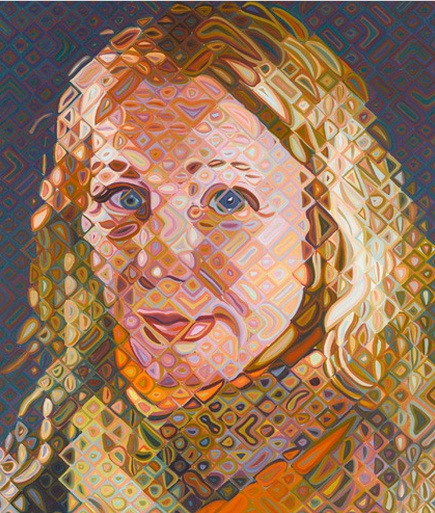 Close’s work, since his accident, has consisted of an array of paradoxes; not only handcrafting with digital production, but conceptual with figurative and small scales with large. These contradictions of sorts that exist through his work and mediums speak to a personal experience and achievement. 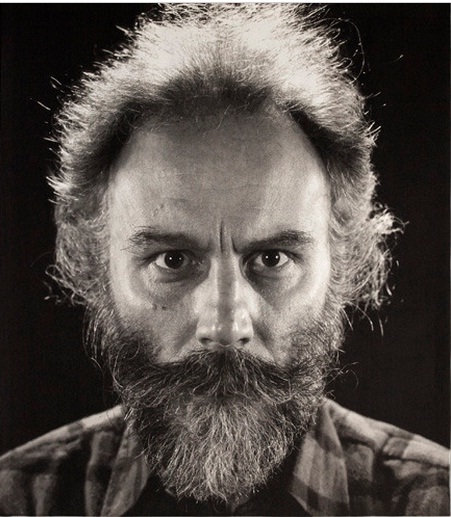 Related Links:
Gallery Site [Pace Gallery]
60 Minutes: [“Face Blindness: When everyone is a stranger“]
Village Voice: [“A Visit With Art-World Hero Chuck Close“]
CBS This Morning: [“Chuck Close’s advice to his younger self“]

This entry was posted on Tuesday, December 4th, 2012 at 6:50 pm and is filed under Art News, Go See. You can follow any responses to this entry through the RSS 2.0 feed. You can leave a response, or trackback from your own site.