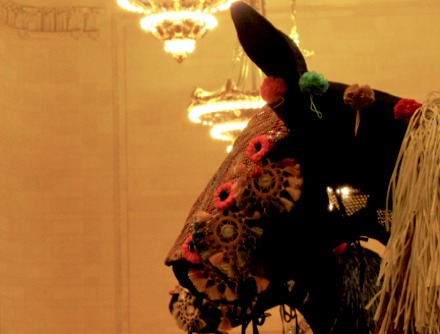 Artist Nick Cave was in New York on Monday, presenting his new performance piece, HEARD•NY, at Grand Central’s Vanderbilt Hall.  Co-presented by Creative Time and MTA Arts for Transit, Cave’s ambitious project involves sixty dancers from The Ailey School suited in 30 life-size horse costumes. In choreographed gestures, the horses move around as a colorful herd, bobbing their heads and kicking their feet, intermittently grazing and foraging like real equines. 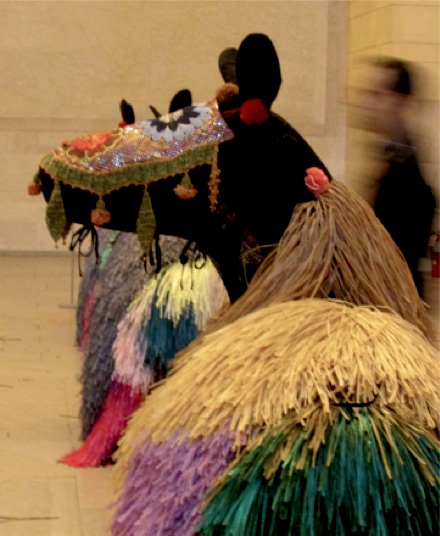 Adapted from an earlier work done at the University of North Texas, Cave has brought his horse suits to a larger stage, filling a major artery into and out of New York City with his elaborately costumed creations.  The horse costumes themselves are part of a body of work called “Soundsuits.”  As a fabric sculptor and performance artist, Cave handcrafts these signature creatures referencing ritual attire and embroidery techniques from various cultures.

Reacting to the wearer’s movements, Cave’s Soundsuits swoosh and swish, engaging the audience on both visual and auditory planes, complemented by the actors’ playful mannerisms and thunderous synchronized movements. The horses coyly shake their manes and behinds to a giggling audience, playing up the performance.  Accompanied by melodic live harp, percussion and drums, the presence of the animals reignite the ephemera space of the Terminal, temporarily transforming Grand Central from a mundane portal to something much more spectacular. 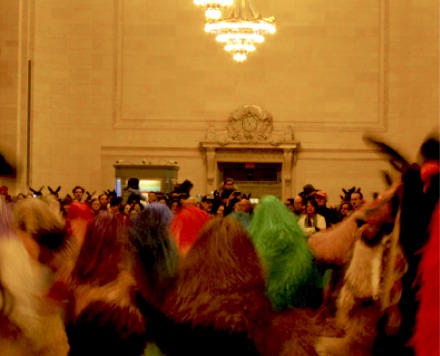 Cave explained that his main goal for this HEARD•NY is civic responsibility. The meticulous craftsmanship and choreography elevates the space, pulling spectators into a fantastical dream-state, something they rarely experience in their day-to-day commute. Cave stated, “Having space to dream about the future and aspirations is critical to me—to create a project that jump starts that train of thought.” 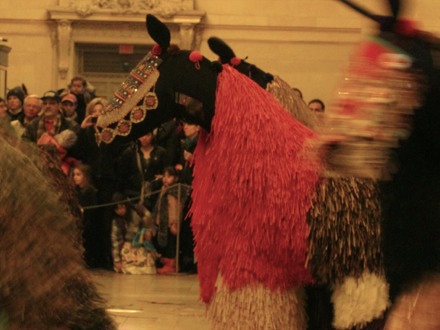 The performances, or “crossings,” are held twice daily (11am and 2pm) through Sunday March 31 in Vanderbilt Hall, adjacent to the Main Hall in Grand Central Terminal, New York.

All photographs by Shireen Lohrasbe for Art Observed unless otherwise noted.

This entry was posted on Sunday, March 31st, 2013 at 12:02 am and is filed under Art News. You can follow any responses to this entry through the RSS 2.0 feed. You can leave a response, or trackback from your own site.