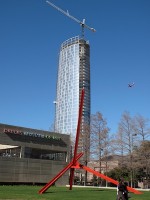 The ongoing debate between the Museum Tower and the Nasher Sculpture Center has taken a new turn, with the owners of the 42-story residential building reportedly using fake social media accounts to sway public opinion.  The fake social media accounts are just the latest exchange in this heated debate, particularly given the tower’s imposition on the atmosphere and lighting of the museum.  Several works have shown increased damage due to the light from the tower’s reflective surface, and the museum’s public gardens have also suffered.  “For almost two years…we have watched with growing concern as Museum Tower threatens our neighborhood, spreading misinformation rather than working earnestly toward solving the problems it has created.”  Dallas Museum of Art director Maxwell Anderson and Catherine Cuellar, executive director of the Dallas Arts District Foundation, said in an op-ed published last month.

This entry was posted on Tuesday, July 30th, 2013 at 2:53 pm and is filed under Art News. You can follow any responses to this entry through the RSS 2.0 feed. You can leave a response, or trackback from your own site.