New York – Thomas Houseago: “As I Went Out One Morning” at Storm King Art Center through November 11th, 2013 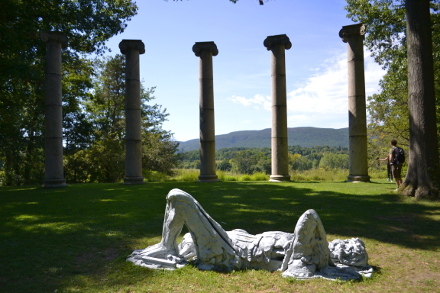 In the first ever large-scale presentation of the work of artist Thomas Houseago, Storm King Art Center in New Windsor, New York, presents “As I Went Out One Morning” – a unique exhibition combing both indoor and outdoor sculpture in several media, including bronze, aluminum, plaster, charcoal, and drawings. 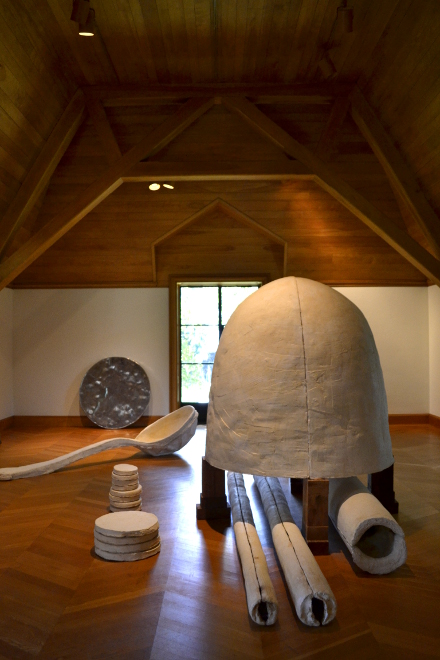 Houseago’s work makes sweeping references to a variety of periods of sculpture, from Hellenistic to Modernist, and displays a wide range of influences. The title of his exhibition, for example, “As I Went Out One Morning,” is taken from a Bob Dylan song about British revolutionary writer Thomas Paine, leaving Britain to assist the American revolt against the English.  Born in Leeds, England, but currently living in L.A., Houseago felt a parallel between the journey Thomas Paine made to new beginnings and new lands during the American Revolution, and his own personal journey living in the United States, and setting out to create an exhibition overlooking the scenic Hudson Valley landscape. 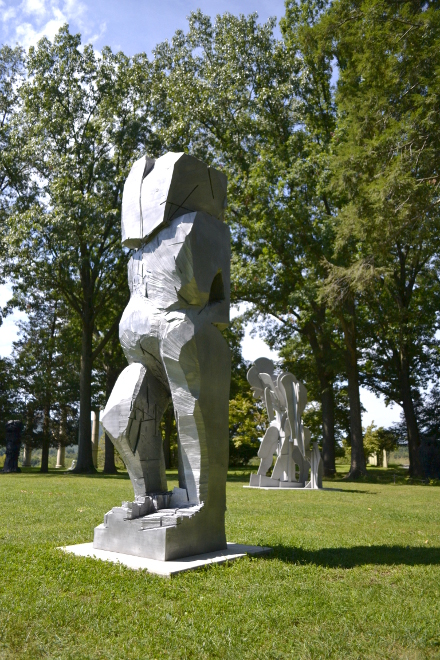 Indeed, Houseago is particularly interested in the bridges and connections between seemingly unrelated thoughts and aspects of art. “That’s how avant-garde ideas came to me,” he states in an interview with Nora Lawrence. Citing the Beatles’s Magical Mystery tour as an example of how avant-garde came to those growing up in the 1970s through film and music, he notes the high-art of Dadaism, word association, absurd poetry, and wordplay found in lyrics as just one of many successful examples of these bridges of influence he explores in his own art.  What draws him particularly to Dylan is his unique combination of 1960s psychedelic aspects and a truly old folk influence. For Houseago, the new and the primitive are perfectly combined with an aspect of new freedom in Storm King’s Hudson Valley location. “Striding Figure II (Ghost) was meant to be outside” he says. “The sculpture talks a lot about Calder, who uses these shaped, flat planes to almost play in space” – he explains, referencing the branch-like bones of the sculpture. “I made it in the studio with the back door open, so it was against the sky. So I almost made it like I was outdoors.” 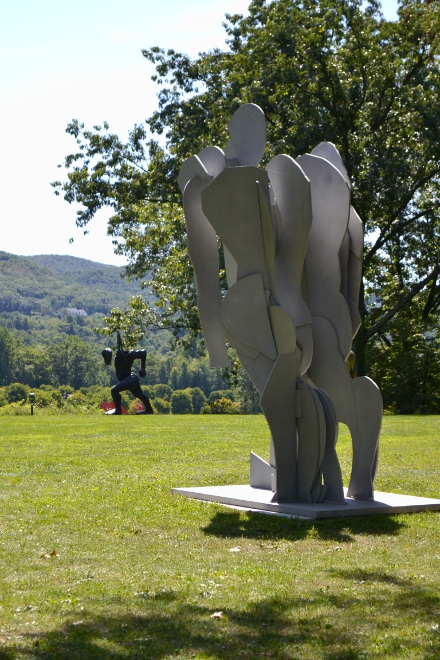 A larger play on space can certainly be found in Houseago’s work. There is a dramatic move in “As I Went Out One Morning” out of the traditional museum or gallery setting as many of his sculptures are outside on the park’s Museum Hill, and even within the confides of the inside gallery space, Houseago has tailored his work with site-specific installations – including two felt wall hangings made to incorporate into the piece on-site. 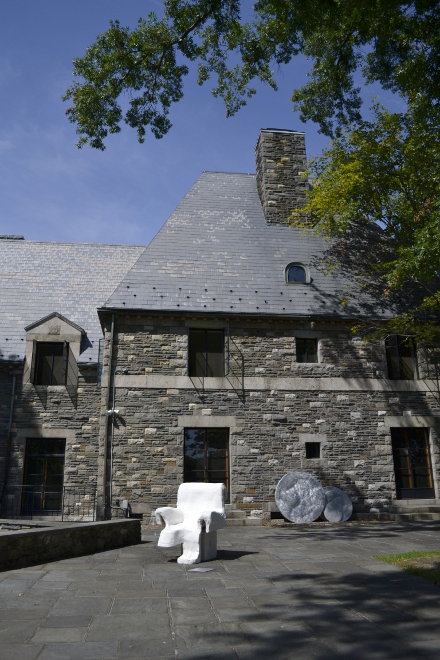 Throughout “As I Went Out One Morning,” there is an idea of inhabiting the work as one would inhabit a studio, and a dialogue between fine art and everyday objects. There is fine art outside of the museum, sketches inside of it, and other pieces which seem almost like patio furniture. A plaster chair which visitors are encouraged to sit in evokes a sense of the artist’s studio in the midst of other moments of radical high Modernism. 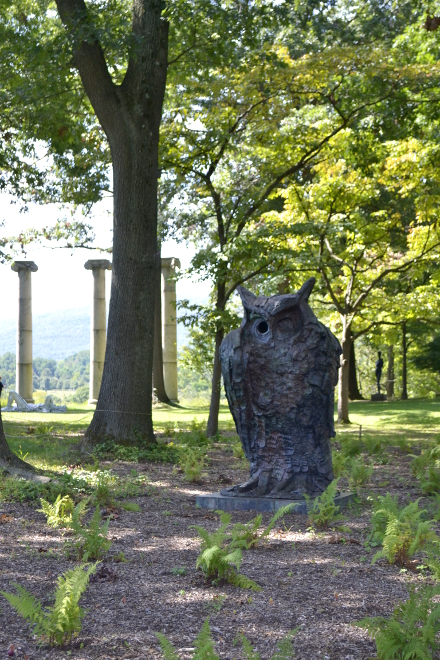 Present with this interest in the studio space is a preoccupation with process of making art. Wood scraps and sketch drawings contribute to a raw element in Hauseago’s work, and contribute a certain performative element to the exhibition.  Existing somewhere between monolith, architecture, and sculpture, the inherent impossibilities of making objects existing outside of time, for Houseago, led to a performative process.  By making no effort to cover up how its process of creation was carried out over several days, and leaving marks where tools were dropped by his assistants or redone, the sculpture exists somewhere between object and performance. 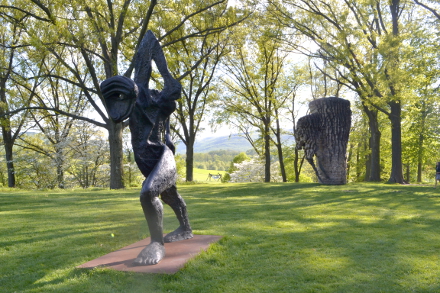 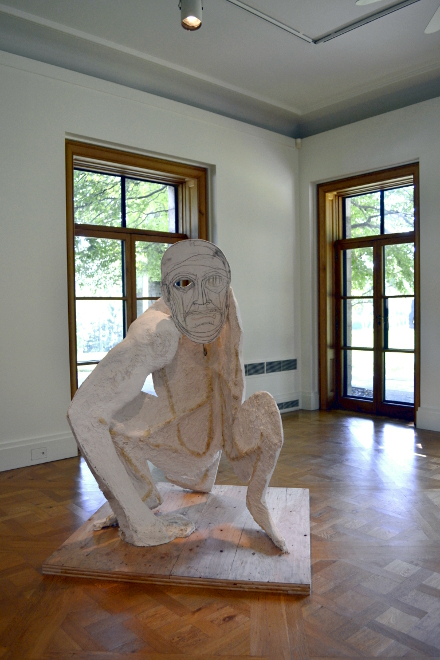 Houseago’s work capitalizes on changes of perspective, and on a play of abstraction and representation.  Seeking the pure experience with regards to the acts of looking, recording and creating, his work stands both as a testament to the object created, as much as the process that brought it into being.  “As I Went Out One Morning” will be on display at Storm King Art Center until November 11, 2013. 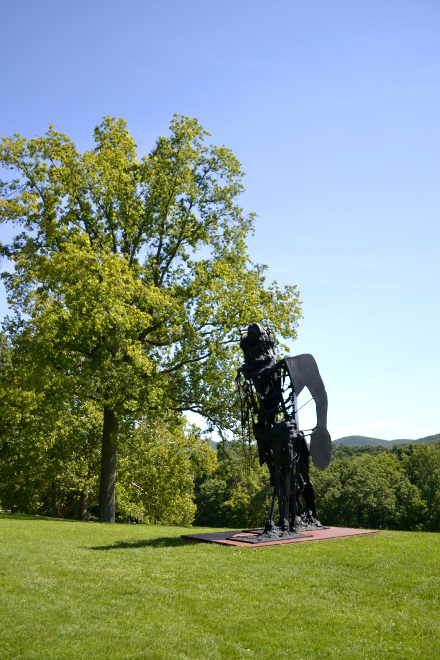 Read more:
Thomas Houseago
“As I Went Out One Morning”
New York Times

This entry was posted on Saturday, September 28th, 2013 at 12:00 am and is filed under Art News. You can follow any responses to this entry through the RSS 2.0 feed. You can leave a response, or trackback from your own site.