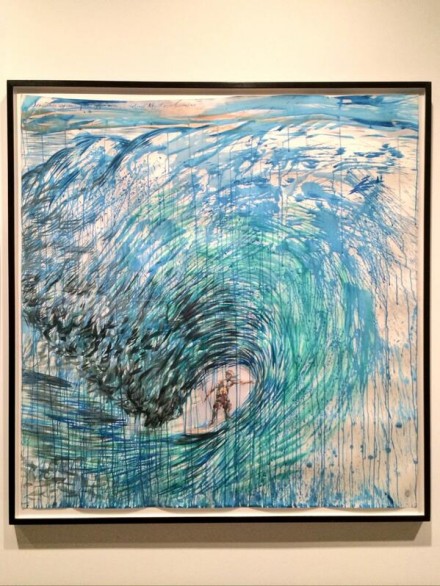 Raymond Pettibon, No Title (Something Approaches There) (2001), via Art Observed

On view at Venus Over Manhattan is the first exhibition ever to focus entirely on Raymond Pettibon’s surfer paintings, comprised of 40 works created over a 28 year period, from 1985 to 2013. The works vary from small-scale India ink pieces to large-scale paintings up to 10 feet wide, and will remain on view through May 17, 2014. 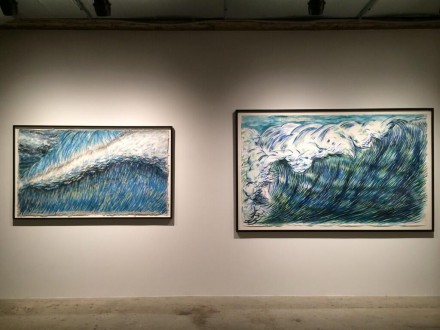 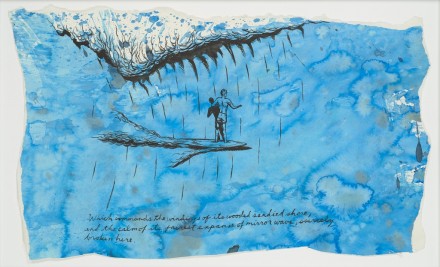 Raymond Pettibon, No Title (Which commands the) (1995), via Venus Over Manhattan

Born in 1957 in Tucson, Arizona, Pettibon has lived and worked in Southern California since the 1970s, where he has honed a unique style inspired by comic books and the “DIY” aesthetic of Southern California punk rock albums, concert flyers, and fanzines. Certain images reoccur dozens of times throughout his massive oeuvre, including baseball players, vixens, light bulbs, railway trains, the cartoon character Gumby, murderer Charles Manson, and other classical American themes.  The most introspective and lyrical of these tropes have been his surfers, which he has been working and reworking for nearly 3 decades – “the solitary longboarder challenging a massive wave…a counter-culture existentialist hero.” 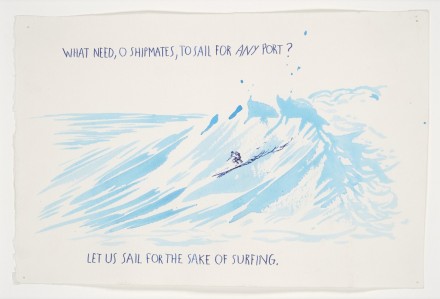 Raymond Pettibon, No Title (What need, o) (1999), via Venus Over Manhattan

Initially Pettibon’s surfers were monochromatic, made with India ink, but in the 1990’s he introduced color using pencil, watercolor, gouache, pen, and acrylic paint.  By the year 2000, his surfer paintings became larger in scale and more complex in content. The repetition of style and increasing complexity can be seen both as a very long diary and the development of a philosophy.  As time progresses, the works include more obvious analogies symbols, such as couples surfing, a wave with an atomic mushroom cloud, and a text referring to Sir Isaac Newton’s Third Law of Physics: “For every action…there is an equal and opposite chain reaction in store.”  Seabirds and UFOs populate some works, while the majority of others depict a variety of lone surfers seemingly swallowed by – yet still managing to navigate – the much more powerful ocean waves. 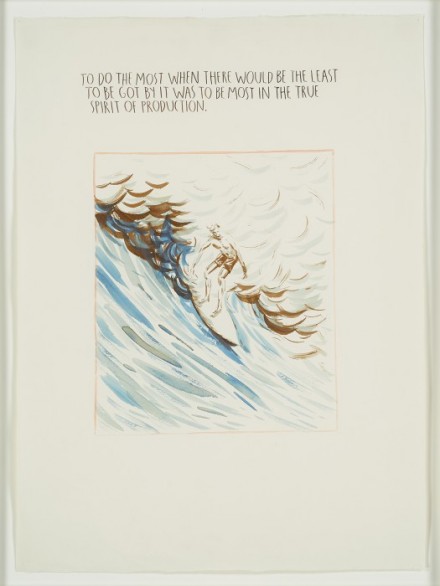 Raymond Pettibon, No Title (To do the) (1990), via Venus Over Manhattan

Pettibon lives and works in the beach town of Venice, California, but he is not a surfer himself.  The works can’t be classified as “surfer art” either, as they don’t represent any specific surfing scene, but rather an homage to the American icon as a symbolic meaning for Pettibon’s own personal journey.  With these works, Pettibon visits and revisits the concept of “the life of an artist…ego and fame, naiveté and bravery, loneliness and mortality.” 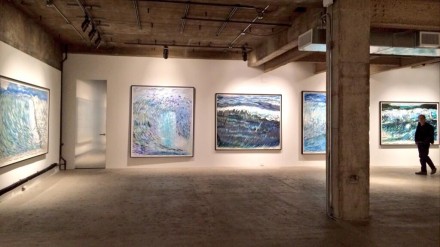 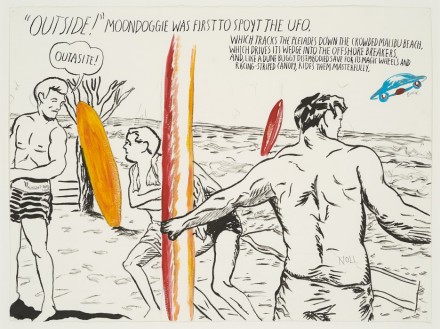 Raymond Pettibon, No Title (Outside! moondoggie was)” (2013), via Venus Over Manhattan

Raymond Pettibon emerged as a professional artist in the 1980s, and the self-trained artist’s work has since been exhibited throughout the United States and abroad. Recent solo exhibitions of Pettibon’s work have been held at the Kunstmuseum Luzern, Lucern, Switzerland (2012); Kestnergesellschaft, Hanover (2007); Kunsthalle Wien, Vienna (2006); Centro de Arte Contemporáneo de Málaga, Spain (2006); Museum of Contemporary Art San Diego, La Jolla, California (2005); and the Whitney Museum of American Art, New York (2005). He has participated in the Venice Biennale in 2007 and 1999; the Whitney Biennial in 2004, 1997, 1993, and 1991; and in documenta XI, Kassel in 2002. 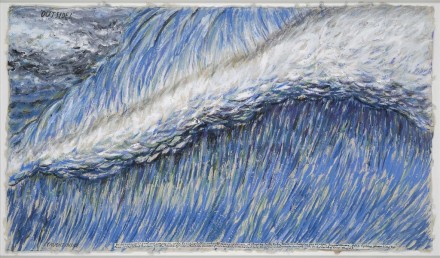 Raymond Pettibon, No Title (Outside! caught inside) (2007) via Venus Over Manhattan 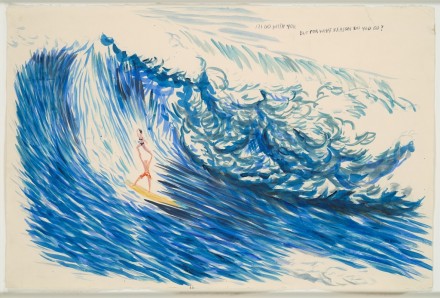 Raymond Pettibon, No Title (I’ll go with) (2003), via Venus Over Manhattan 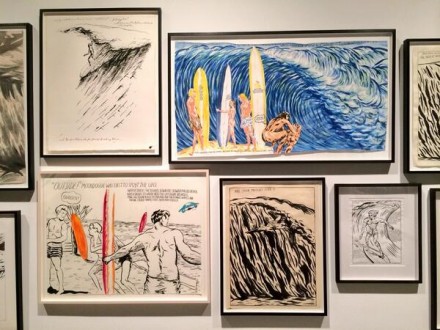 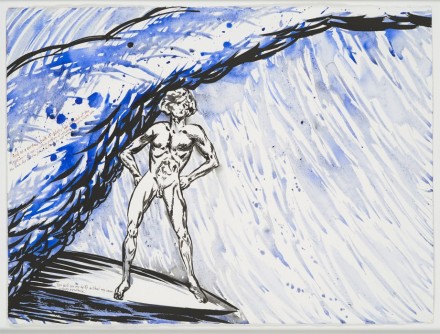 Raymond Pettibon, No Title (And as a) (1998) via Venus Over Manhattan

This entry was posted on Friday, May 16th, 2014 at 9:51 pm and is filed under Art News. You can follow any responses to this entry through the RSS 2.0 feed. You can leave a response, or trackback from your own site.