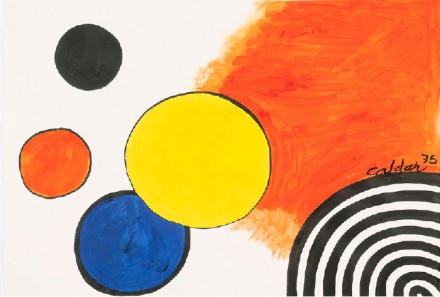 On view at Gagosian Gallery in London is the second segment of a two-part exhibition of American sculptor and painter Alexander Calder’s gouache paintings. The first part was held in New York at Gagosian’s Madison Avenue location through June 14th, and on June 10th the second part opened in London, slated to continue through July 26th, 2014. 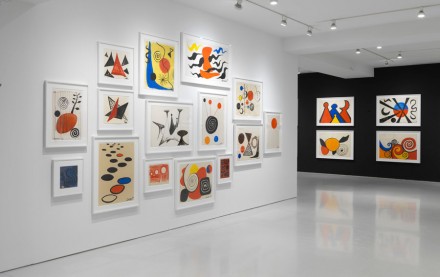 Calder was born in 1898 in Pennsylvania and died in New York City in 1976. In the late 1920s, he innovated his sculpture practice by bending and twisting wire to “draw” 3D figures, which was well received by the Conceptual and Constructivist art circles, as well as within the world of abstract painting. He was always fascinated with capturing motion, and is well known for his kinetic scuptures made of flat sheet metal painted cutouts of abstract shapes hanging from wires – which became known as mobiles. He later created standing “stabiles,” welded and bolted sculptural works which did not move but nevertheless gave another interpretation of catching an object in motion. 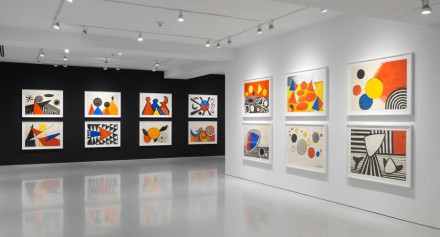 In 1953, Calder created a series of pantings in gouache, during his stay in Aix-en-Provence. He continued his practice of working in gouache throughout his life, parallel to his sculptural practice. The works were painted quickly, made in attempt to “transcribe the vocabulary of his sculpture into a medium far more immediate…” The shapes in the paintings are much more relatable to objects found in real life, such as the sun, pyramids, boulders, orbs, solar systems, and cacti. In these works, Calder celebrates nature and “evokes the subconscious,” and although these painted works are still very abstract, they help viewers to understand the thought process that perhaps went into his even more abstract sculptures for which he is much better known. 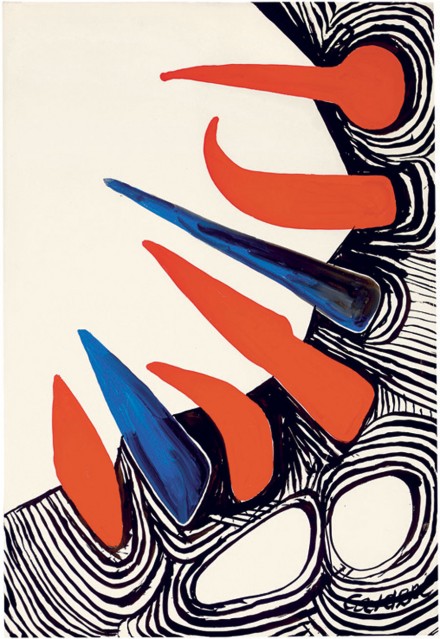 It’s interesting to trace Calder’s work here alongside the practice of his close friends and contemporaries like Piet Mondrian (one of his earliest influences) and Joan Miró.  Much of the same colorful, simplistic techniques and basic geometric or abstract forms dominate the canvases on view, and provide Calder a language to explore the same structural interests that dominate his hanging works and sculptures.  The whimsy and imagination of Calder’s earlier works like his famous Circus can be seen throughout, but are countered by a more nuanced, skilled technique, hard-won after years of practice.

This unique exhibition of vivid paintings will remain on view at Gagosian London through July 26, 2014.

This entry was posted on Monday, July 14th, 2014 at 12:00 am and is filed under Art News. You can follow any responses to this entry through the RSS 2.0 feed. You can leave a response, or trackback from your own site.