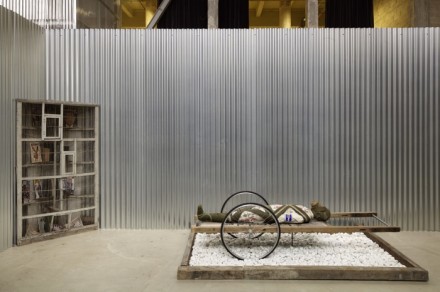 In “Aujourd’hui, le monde est mort [Lost Human Genetic Archive]” on display at Palais de Tokyo, Hiroshi Sugimoto peers through time and presents a world balanced between life and death. Known for his photographic collections Diorama (1976), in which he photographed animal displays in natural history museums, Theaters (1978), long-exposure photographs of old-style American theaters while movies play on the screens, and Seascapes (1980), long-exposure black-and-white photographs of the meeting of sea and sky, Sugimoto explores the passage of time, making it tangible through the era of his subjects and the long exposure times used. 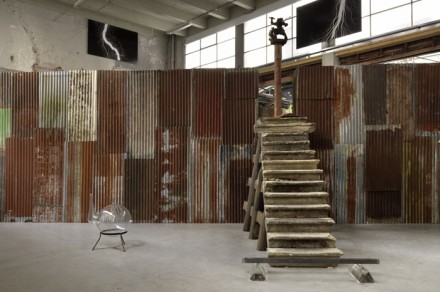 His exhibition, the title of which translates to “Today, the world is dead,” depicts 33 possible stories describing the end of the world, or a state in which humans no longer exist. Surrounding the pieces within the exhibition with walls of rusting corrugated metal and mimicking lightning, rain, and thunder, Sugimoto has converted the gallery space into an environment of ruin. From a gas-masked figure on a stretcher, to a sneering Shinto Thunder god perched atop a stone staircase, to a collection of fossils, Sugimoto tracks an ancient timeline of the world, ultimately leading to one of his possible ends. In an interview with Palais de Tokyo, he says, “Photography is time recording devices, and so I use my camera to watch history.” Not only does he collect pieces of history with his photographs, some of which hang on the walls of the exhibit, he uses the fossils to point to a time before human life, stretching the timeline as far on both ends as possible. 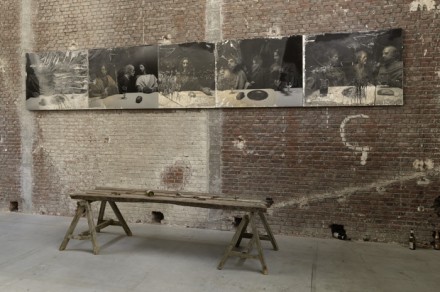 The exhibit displays captions in some parts, many of which are as absurdly whimsical as they are descriptive. In a recurring theme pointing to the title of the exhibit, one caption reads, “The world died today. Or maybe yesterday, I don’t know.” Referencing the opening lines of Albert Camus’s The Stranger with “the world” in place of “Maman” (mother), Sugimoto draws on the maternal aspects of the world as provider as well as the aspect of distant indifference that resonates throughout The Stranger. Another caption reads, “Genes went haywire and made seedless melons out of everyone,” pointing to a reproductive catastrophe ending the world. 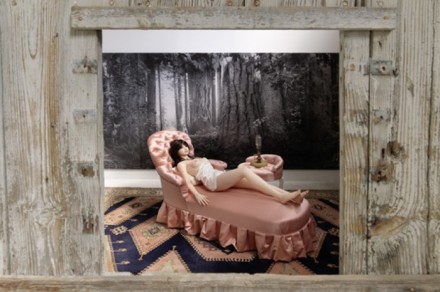 One remarkable portion of the exhibit draws inspiration from Marcel Duchamp’s Étant donnés: 1. La chute d’eau, 2. Le gaz d’éclairage (Given: 1. The Waterfall, 2. The Illuminating Gas), a diorama-like piece in which the viewer sees through a peephole in a large wooden door a nude woman sprawled out on a bed of dead twigs and leaves, gas lantern in her hand, with forest scenery in the background. Sugimoto’s interpretation has the viewer peering through a square hole in a wooden frame to a hyper-real Japanese sex doll perched in a tensed position atop a pink divan. The gaslight here sits on its own piece of furniture, and the forest scenery has been replaced by one of Sugimoto’s black-and-white photographs. This piece expresses a sort of continuity in the creation of art, while challenging the view of the human form by using an exaggeratedly sexual human representation. 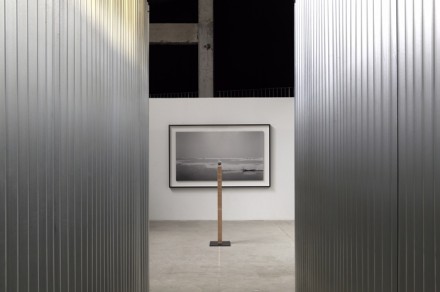 Sugimoto brings beauty and sentimentality to ruin, but he claims that we all flock to such ruins for affirmation. A thing being in ruins while still maintaining its beauty seems to be above the constraints of time. In the interview with Palais de Tokyo, Sugimoto explains the importance of the Japanese aesthetic in his work: “Japanese aesthetic, whether it’s in a painting or a play, the most important thing is how to end beautifully, how to die beautifully. The way you finish your life, it has to be aesthetically beautiful.”

This entry was posted on Monday, August 11th, 2014 at 12:00 am and is filed under Art News. You can follow any responses to this entry through the RSS 2.0 feed. You can leave a response, or trackback from your own site.