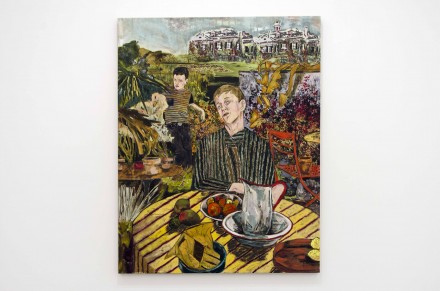 Hernan Bas’s new show at Galerie Perrotin, his third with the Parisian gallery, is a powerful display of young males whose depictions make much of their disaffected air.  Possessed of a strong sexuality, they use their unconcerned demeanor to enthrall the viewer. Digging deep into the history of painting, Hernan Bas rediscovers 19th century ideas of aesthetic and theme, albeit taking a notably modern twist.  These figures are deceptively contemporary, and explicitly avoid visualizations of older symbolic characters, though they share some similar traits. 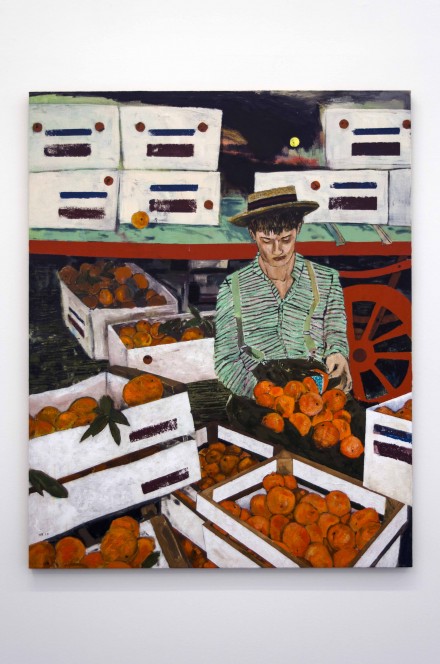 Bas lives and works in Detroit. Yet his images do little to conjure the stereotypical constructions of the town as a post-industrial landscape, and in fact often sit at a nearly opposite end of the spectrum.  Intriguingly colorful and carrying a figurative subtlety that belies the exotic nature of the figures, they frame these androgynous dandies, arrogant in their position and space as owners of time, almost bored by the attention given to them. They call to mind models in a fashion magazine, blasé posers who almost unwittingly create the complexity that makes these works so enticing.  Treated in such a modern manner, the works establish a dialogue through the centuries, a revival of sorts of the dandy as a figure of fascination and figuration. 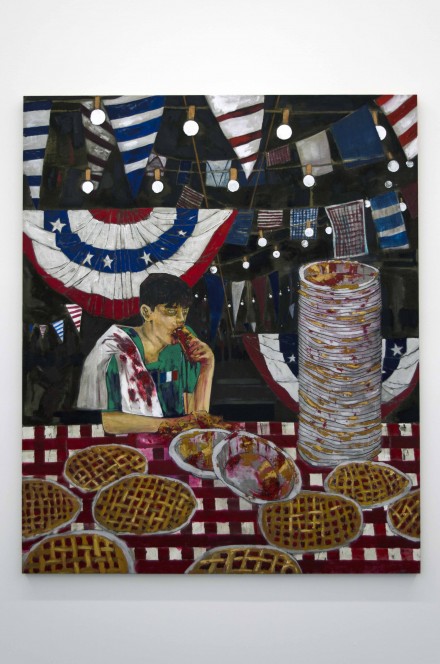 The titles of the works also play an important role in the understanding of Bas’s ideas. The humorous puns interwoven in the titles create with the paintings themselves a complex arrangement of concepts.  Inherent to each is a particular wit that exposes his characters, who by their seeming absence of action, end up possessed by a vibrant energy that ensnares the viewer.  The underlying innocence of these angelic visages clashes with the powerful and rough physical treatment these paintings go through. The tortuous textures create a vivid tapestry for the softly treated figures that exist within. This duality defines much of Bas’s work.  In Wilting, a dying bouquet of red, pink and white flowers slowly bow their heads as life abandons them, a straight forward image that also plays on implications of a loss of energy or confidence.  The character present in the back of the painting is dressed in red, with a skin that oscillates between pink and white, a pale figure staring melancholically at the bouquet itself.  A strong sense of erotic passion seeps through these combinations, as if we are looking at these young men through the gaze of a voyeur. 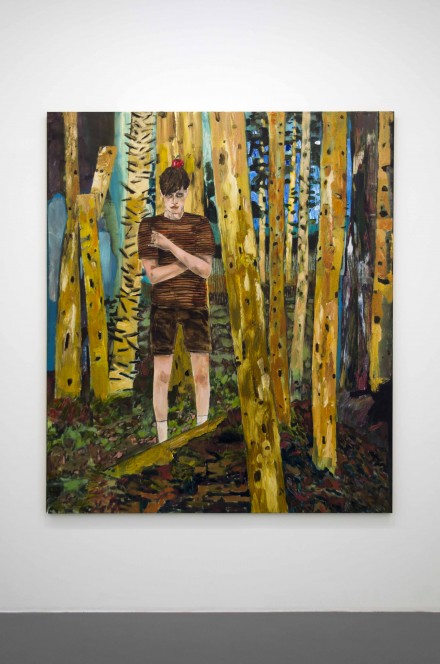 In William Won’t tell (pinky swear), the viewer stumbles upon, or is being stumbled upon, a forbidden situation.  A young man, as implied by the childish action of pinky swearing, stares with empty eyes at you. His whole body language screams discomfort and unease. This is where Bas’s craft is at its best. For it is only after further analysis of both the title and the painting that we notice a single red apple sitting on the head of the young man.  What at first seemed like a typical scene of forbidden acts suddenly transforms into a much more mysterious act. We are William, looking at our target in a reenactment of the myth of William Tell, the Swiss folk hero. The large size of the painting wants us to become more than an observer, moving towards an active participant in the scene. The frames are sized in a way that matches the stature of most viewers old enough to understand the subtle language these painting exude.

Hernan Bas’s show is on view at Galerie Perrotin until December 19 2015.

*All images are by Paul Lemarquis for Art Observed.

This entry was posted on Sunday, December 20th, 2015 at 9:58 am and is filed under Art News, Featured Post, Show. You can follow any responses to this entry through the RSS 2.0 feed. You can leave a response, or trackback from your own site.