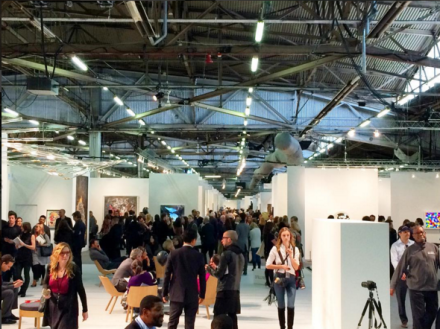 Opening its doors for its press and VIP preview today, the 22nd annual Armory Show is officially underway, bringing the art world’s top galleries and exhibitors to Piers 92 and 94 for another year of sales and showings. 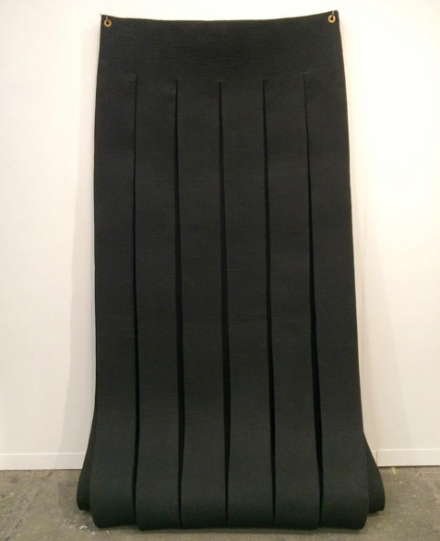 New Armory Show head Benjamin Genocchio was on-site, and presided over the day’s press conference, moving from a face in the crowd of press correspondents, editors and writers to his role as the event’s key organizer. Klaus Biesenbach was also on hand, as was Thelma Golden, Anne Pasternak and John Waters, strolling through the aisles and eying the works available. 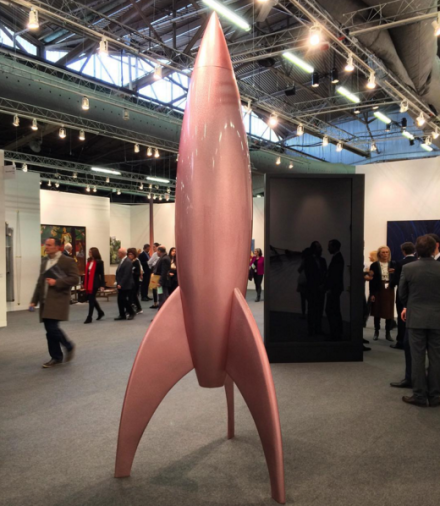 The event, hosting 205 galleries this year, gave the Piers a decidedly relaxed aura, up from last year’s count below 200, yet still offering the exhibitors more space to explore flexible exhibition plans on the floor’s long, narrow layout.  Even so, a number of notable absences could be noted.  A number of larger galleries had skipped the fair, while some seemed to have moved to the Independent fair downtown, fueling speculation that that frequently referenced market correction had convinced some dealers to stay home.  Even so, the fair proceedings offered a consistently engaging atmosphere this year, encouraging visitors to look deeper into booths and spaces for the unexpected surprise.  Even so, the buying atmosphere was markedly subdued. 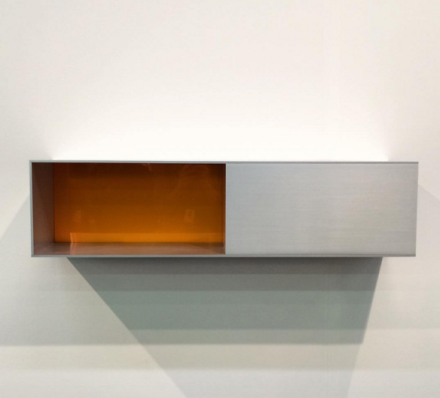 David Zwirner had reprised its position at its prime corner space, bringing a selection of pieces by Oscar Murillo, Sherrie Levine and Donald Judd, among others.  The gallery had sold a Wolfgang Tillmans early in the day, with a number of additional works on reserve, but could not confirm price.  Nearby, Thaddaeus Ropac had reprised his Space Age exhibition, which opened at his Paris Pantin location this past fall. Bringing works from Sylvie Fleury, Tom Sachs, James Rosenquist and others, the works focused around the outer reaches of human perception and its inclinations towards exploration and adventure. 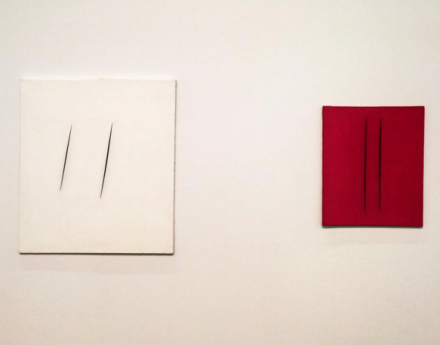 Jessica Silverman had brought a striking series of works by Dashiell Manley and Hayal Pozanti, as well as Sies + Höke, which was showing a series of paintings by Henning Strassburger.  Lorcan O’Neil was also presenting an interesting booth, combining works by Tracey Emin with a series of pieces by Eddie Peake, including an eye-catching work combining reflective materials and trinkets with pale luxury signifiers, a notable departure from his previous text-based works on mirror. Over at Cardi Gallery, the gallery’s large booth was afforded ample space for a series of works by Lucio Fontana and Pino Pinelli. At Kavi Gupta, one saw a more freewheeling approach, with vivid compositions, assemblages and sculpture. Pastiche was the name of the game here, with works by Mickalene Thomas, Irena Heiduk and Angel Otero each trying their hand at disjointed techniques that each felt distinctly unique. 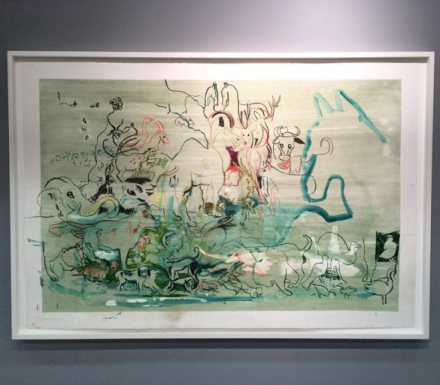 In the Armory Presents section, a number of artists were exploring intersections of multi-media and more traditional practice. In one corner, Berlin gallery KOW had perhaps brought the fair’s most powerful, challenging piece, a dual-screen video documentary by Mario Pfeiffer. Combining protest politics and dystopian alarmism, the Brooklyn-based Pfeiffer’s piece parallels the politically critical rap of Bed-Stuy’s Blacktivists hip-hop collective with Texas’s Defense Distributed company, a group of white entrepreneurs actively distributing information on manufacturing gun parts through 3-D printing technology. Underscoring the political advocacy and disparate authoritarian responses to each group’s politics, the work’s high-production value manages to play a cautious, yet nuanced political critique, tracing shared fragments of ideology twisted through various political lenses, namely the militant pacifism and community-engagement of Blacktivists against the actively violent, corporately-modeled work of DD. “Only one of these groups is at constant risk of getting shot by the police,” Pfeiffer pointed out. 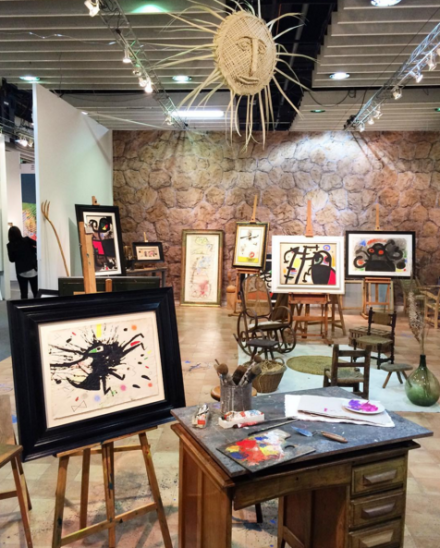 Miró’s Studio at Mayoral in the Modern Section, via Art Observed

A distantly related thread of cultural dystopia was found nearby at Carlos/Ishikawa, where Ed Fornieles’s explorations of globalized violence, social decay and cultural hybrids, constantly defrayed by his use of anthropomorphic animal mascots. It was a fitting counterpoint to the KOW work, and offered an expanded perspective on related themes. 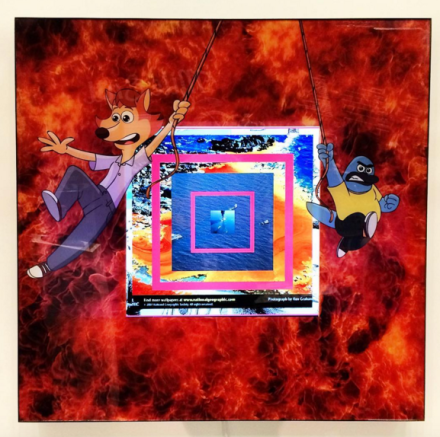 In the Non-Profit section, a number of museums had entered the fray of the fair, offered editioned works and small-scale pieces, including a series of luminous industrial casts by Mika Tajima on view at SculptureCenter, and a set of small Phyllida Barlow assemblages at the Tate Modern. 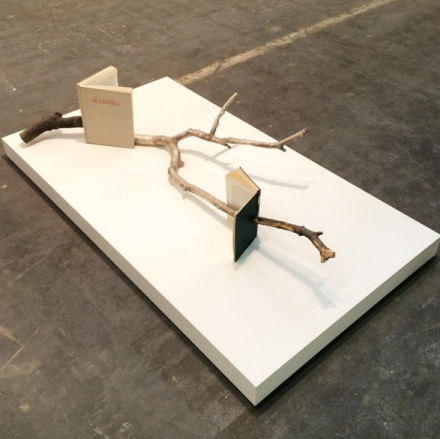 Alicja Kwade at i8, via Art Observed

At Pier 92, the Modern Fair was also in full swing, as its more subdued layout and relaxed booth designs played host to a more historically focused series of works. Particular highlights included a striking Roy Lichtenstein interior from London gallery Sims Reed, as well as a series of Picasso drawings spanning the artist’s career, on view at John Szoke. But it was Barcelona’s Mayoral Gallery that drew most of the attention, bringing a meticulous re-creation of Joan Miró’s studio space, complete with hanging sculpture and work spread across a series of easels on a tiled floor. It was a striking addition at the entrance to the Pier, and which saw many pausing to photograph themselves among the clustered works of the Spanish master. 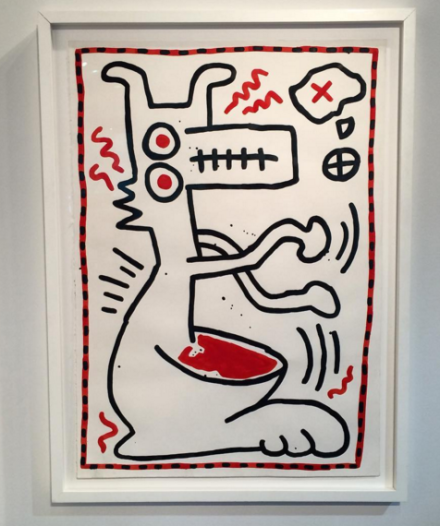 Genocchio’s first outing with the Armory Show seems to have come off smoothly, combining the fair’s already strong reputation with a more exploratory focus.  Considering his background, it will be interesting to see how he continues to work with exhibitors and the selection process in the future.

The fair will open to the public today and runs through this Sunday, March 6th.

This entry was posted on Thursday, March 3rd, 2016 at 10:53 am and is filed under Art News, Featured Post, Show. You can follow any responses to this entry through the RSS 2.0 feed. You can leave a response, or trackback from your own site.