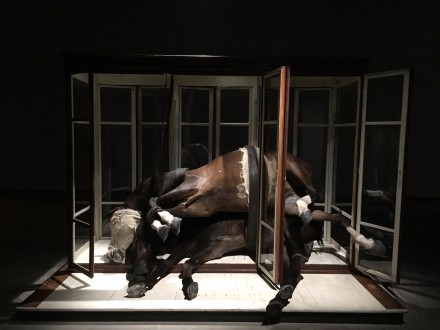 Berlinde De Bruyckere, No Life Lost II (2015), all images via Osman Can Yerebakan for Art Observed.

No Life Lost is the title of Belgian artist Berlinde De Bruyckere’s current solo exhibition at Hauser & Wirth, half a decade after her last New York presentation at the gallery. Widely recognized in Europe for her emotionally challenging oeuvre, De Bruyckere employs spirited, commanding textures in resin, wax, textile and animal skin, placed alongside rugged industrial materials, delivering a haunting body of work that follows its audience outside the gallery space. 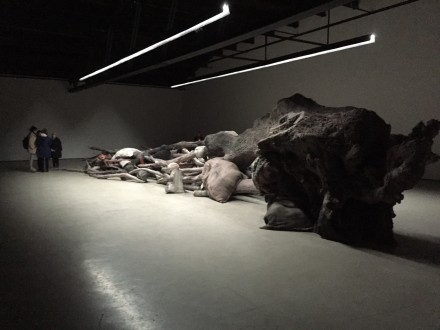 Looking back at her roots in the Flemish region of Northern Europe, De Bruyckere channels paintings of Dutch Renaissance in often three dimensional forms, borrowing at great level from the school’s traditionally uncanny color spectrum and depictions of life and death with immense pathos. Bursting with fleshy vivacity, while often managing to maintain a convergently frigid austerity, the artist’s juxtapositions materialize such a space between entropy and demise, a space where fluid life is always just out of reach.  Encapsulating existentialist sentiments in its perhaps the show’s most grandiose form is Kreupelhout – Cripplewood, 2012-2013, an immense installation that had its debut at the Belgian Pavilion during the 55th Venice Biennale in 2013, the outcome of a collaboration between the artist and South African author J.M. Coetzee, who had joined as the curator of the exhibition. 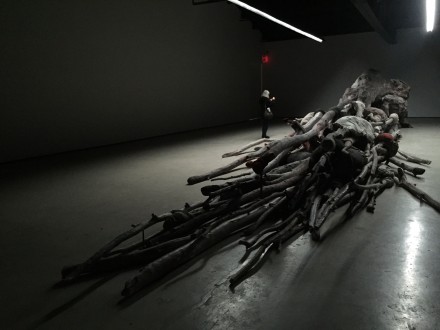 Awaiting inside the dimly lit rear gallery, secluded from the rest of the exhibition, Kreupelhout’s mammoth formation of graciously collapsed Burgundy elm confronts the viewer with its elegance and enduring, petrified vigor.  Imbuing futile struggles of a decaying body into meticulously orchestrated amalgams of wax, epoxy, iron, wood and blankets with its arm-like branches, this eerie installation eulogizes the dignity of an unhurried, gradual movement towards extinction and the arduous endeavors of a body facing its decay.  Inspired by a fallen tree she encountered while driving in the south of France, the artist urges her audience to pause and contemplate this monument of evanescence. 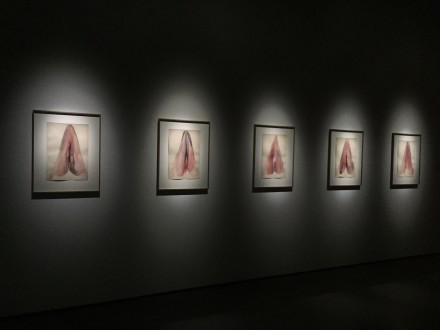 The majesty beneath a solemn, resigned death is not a foreign thread for De Bruyckere, whose use of taxidermy is among her most striking and challenging work.  No Life Lost II, on view here, is an impactful return to this work, combining three horse carcasses held together by leather straps, and piled inside an open vitrine of glass and iron.  A silent ode to lives spent for noble battles—of horses, humans and other creatures—the sculpture transforms brutality into a serene elegance, and is accompanied by to Zurbarán, 2015, another difficult work that presents an otherwise youthful foal.  The difficulty of witnessing the animal’s lifeless form is not eased by its blindfolded eyes and tied legs: such methods often practiced to abate the slaughter process here only strengthen the artist’s statement on the empty victory of human conquest. The work on view is joined by De Bruyckere’s collaboration with dancer Romeu Runa to realize Sibylle, a performative reflection of threads De Bruyckere weaves in this exhibition, and performed on a regular basis in the gallery until the exhibition concludes.

Berlinde De Bruyckere: No Life Lost is on view at Hauser & Wirth through April 2, 2016. 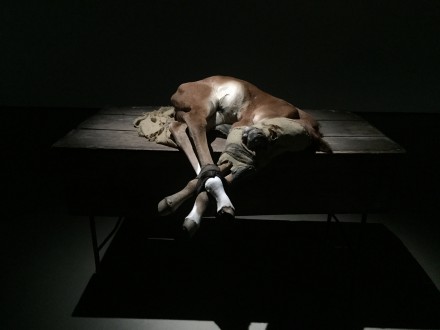 This entry was posted on Tuesday, March 15th, 2016 at 1:59 am and is filed under Featured Post, Show. You can follow any responses to this entry through the RSS 2.0 feed. You can leave a response, or trackback from your own site.