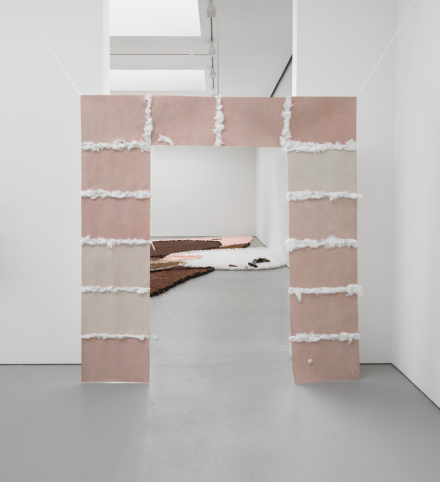 In her second exhibition at David Zwirner, Scottish artist Karla Black takes over the gallery’s 525 West 19th street location to orchestrate a body of work that smoothly maneuvers through rigid conceptions of medium or genres.  In her previous exhibition in 2014, Black executed a carpet-like installation of bath bombs, nail polish, Sellotape and powder paint, infusing an otherworldly, ephemeral aura into the gallery’s white cube architecture through its lyrical presence.  Here, she presents another floor install, employing familiar everyday objects alongside artistically pertinent materials. The work, Includes Use, utilizes toilet paper collected from different parts of the globe, each manufactured in different shades and hues. Akin to budding flowers, the folds of toilet paper in their assorted hues pierce through earthy, plaster powder and paint, channeling a sort of surreal, utopian topography.

Defying the masculine and rigid nature of Land Art, Black’s juxtaposition, paying homage to the genre within indoor space, is malleable and quixotic, conveying her creative fervor though warm tones and meticulous detail. Naming Black’s art as feminine due her employment of supposedly feminine everyday products such as eye shadow or nail polish, however, would be unseemly.  Instead, the work seems to turn the femininity of its materials into an otherworldly ground, where its colors and tones move beyond gendered constructions of identity. 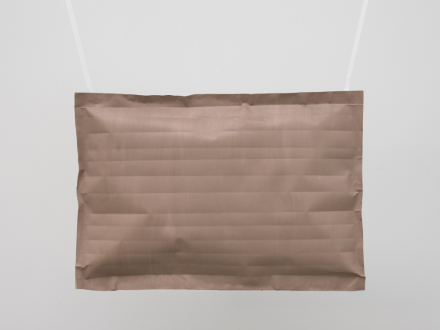 During a conversation with Jeffrey Grove, who curated Black’s solo exhibition at Dallas Museum of Art, the artist noted her inclination towards a genre-bending practice, in which she allows her mediums and forms as much agency as possible.  Such transitory states of operation in Black’s oeuvre opens doors to an abundance of narratives, where each material and signifier is capable of functioning on its own stage. 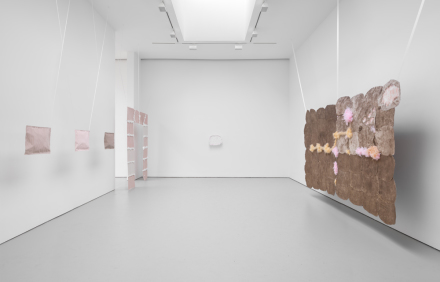 In one work, Black hangs a series of intersecting white ribbons, each bearing a pillowy object that plays on its ghostly presence and craft aesthetics to explore the dissonance between materiality and context of the white cube.  This contrast lends her work much of its ghostly presence.  There Might Be Others, Includes What’s Wanted and Includes Emphasis move beyond entitling these floating forms, for which the artist uses sugar paper as her main element, along with oil paint, eye shadow and cushion stuffing.

In Black’s work, materials withdraw from their original moorings, and turn towards means to create art work, or to transform into works themselves. This categorical movement allows Black to articulate and appreciate each material’s core essence and materiality in similar modes to a scientist, who studies the core interactions of materials with one another, and with their surroundings. 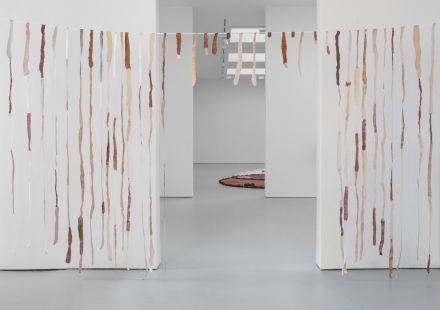 This entry was posted on Saturday, March 19th, 2016 at 12:00 am and is filed under Art News, Featured Post, Show. You can follow any responses to this entry through the RSS 2.0 feed. You can leave a response, or trackback from your own site.