New York – “The Eccentrics” at SculptureCenter Through April 4th, 2016 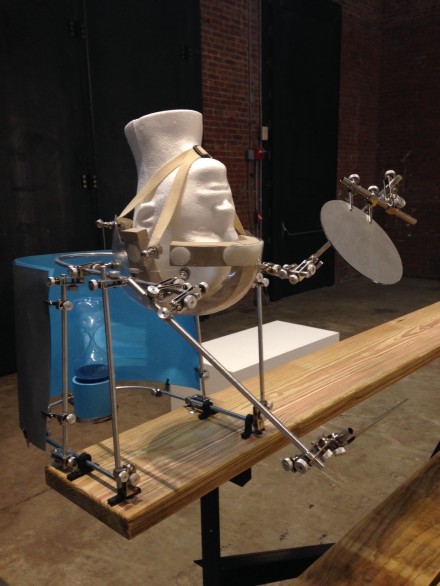 Eduardo Navarro, Five minutes ago (2015), All photos via Osman Can Yerebakan for Art Observed

Since unveiling its new expansion and renovated architecture in 2014, SculptureCenter has been embarking on a series of compelling, and conceptually unorthodox exhibitions, repurposing the building’s structural challenges and unique layout into an equally unique curatorial advantage.  The Eccentrics, organized by the staff curator Ruba Katrib, is the most recent example of such efforts at matching the space’s rugged industrial façade with distinctive aesthetic trends and aesthetic sensibilities in contemporary art.  Introducing eight international artists working in a variety of media, the exhibition stems from German Marxist theorist Walter Benjamin’s observations on the circus as a platform for societal norms and a performance of fabricated others.

In his seminal essay The Work of Art in the Age of Mechanical Reproduction, Benjamin scrutinizes the circus performances of clowns, acrobats or magicians, in which authentic notions of fear, danger and coincidence are substituted for staged emotion.  Benjamin compares these performers to actors of the then burgeoning film industry, and the imitative realities they convey.  Referred to in Russia as eccentrics, circus performers, who were often ostracized due to their physical appearances or extreme risk takings, prevail as agents of visceral exaggeration and visual surplus, akin to the mechanized and indirect realities of the film and TV industries. 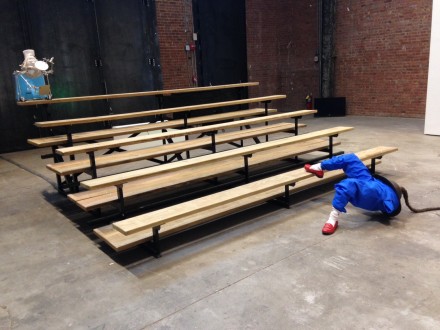 Such enactment of hyperbolic action and social dynamics sets the tone of the exhibition, shifting its perspective through critical lenses of the 21st Century. The artists on view internalize both roles: they are as idiosyncratic as circus performers, yet no less bedazzled and skeptical than their audience.  Taking this relationship at face value, Norwegian artist Tori Wrånes’s Tennis Cat presents this relationship in a concrete iteration.  Eerily reclined on the floor, her sculpture of bizarrely collaged human body lays a single leg atop a wooden step, accompanied by a motor-generated trapeze swinging back and forth at the ceiling. 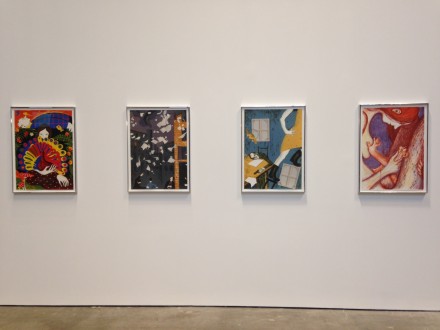 In conversation with this sculpture, in terms of its location and haphazard aesthetics, is Eduardo Navarro’s Five minutes ago, another three-dimensional collage featuring a transparent plastic helmet, aluminum bars, mirrors, traps and an hourglass.  The Buenos Aires-based artist, who is known for his interventions of social codes, here delves into a distortion of time and its perception in the current era.  Contrasting this work is the compelling paintings of Sanya Kantarovsky, presenting a group of buoyant works that incite a sense of vivacity through sweeping figures and whimsical gestures, alongside an equally ‘eccentric’ video projection animating the artist’s singular style.  Expanding out from the wall onto the floor is Tongue PhD (Hardcover), a blown up replica of a tongue and a set of abstract ceramic props by Ieva Misevičiūtėa, who uses this flesh-colored platform as stage for her experimental performances.

Sharing disparate approaches to the manufacture of the image and the performative aspects of its realization both on canvas and in three-dimensional space, The Eccentrics is on view through April 4, 2016. 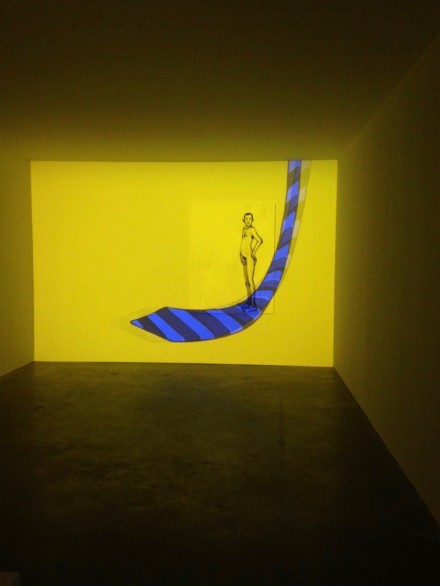 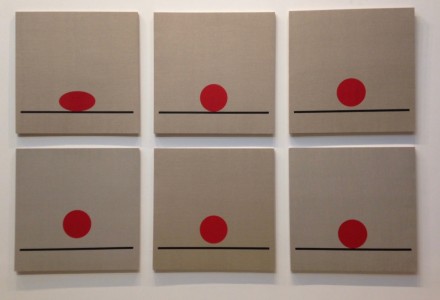 This entry was posted on Sunday, March 20th, 2016 at 12:01 am and is filed under Art News, Featured Post, Show. You can follow any responses to this entry through the RSS 2.0 feed. You can leave a response, or trackback from your own site.