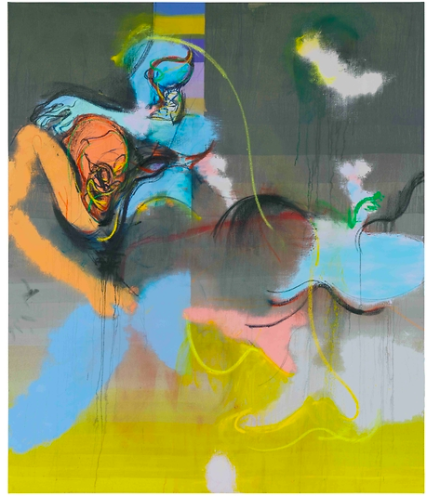 Now through March 12th, Galerie Thaddaeus Ropac Salzburg presents a solo exhibition of Daniel Richter’s new work, Half-Naked Truth, a collection of two separate groups of paintings produced in parallel over the course of the last two years.  Richter’s first experimentation with oil crayons, the show sees an intriguing new movement for the artist, lending his figures an almost crude demarcation or delineation of space in relation to each other. Though the themes of closeness and movement remain consistent with Richter’s earlier works, there is a quality of abstraction in these series that pushes towards testing the boundaries of the act of painting, as well as the artist’s signature use of bright colors and stark contrast from form to form that further his project in each series. 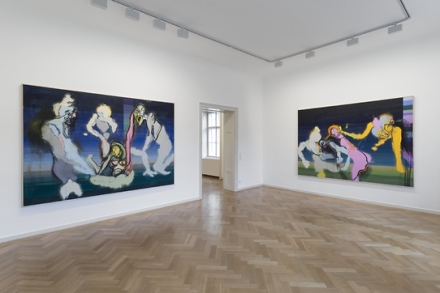 As the text for this show states, Richter’s work constitutes an “experiment with diverse parameters.” The forms that appear in this exhibition attest to the artist’s sensitivity to the suggestion and beauty of parameters. Through erasure, deletion, and an experimental approach to the tools involved in the act of painting, Richter’s arrangements speak to the constructed distances that cut through boundaries erected between bodies and territories.  The work moves beyond Richter’s previous concern with multifarious styles, forms, and traditions, attempting here to create a new and novel visual language to describe positive and negative space, color, movement, presence and absence.  These converging interests make for an intriguing combination of formal exercises, as his explorations of what appears as topographic cartography contends with approaches to human and archetypal figures, fragmented bodies locked in a moment of interaction.

Richter’s ostensibly human figuration functions within a space of closed encounter, communicating a frenetic kind of energy punctuated by the suggestion of sex, aggression or physical discomfort. These forms are also animated further by the vague hint of facial expressions worn by his subjects. In ärgerliches Grün, for example, there seem to be at least two distinct subjects clearly defined in the frame, locked in a lingering moment that is afforded extra impact by the slight expressions of disgust they seem to bear.  The movement and color of this image combine to depict a kind of dance, or the potential for a kind of choreography in the relation between paintbrush and canvas. 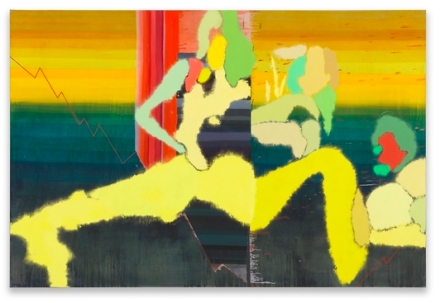 Daniel Richter, Hello, I love you (2015), via Thaddaeus Ropac 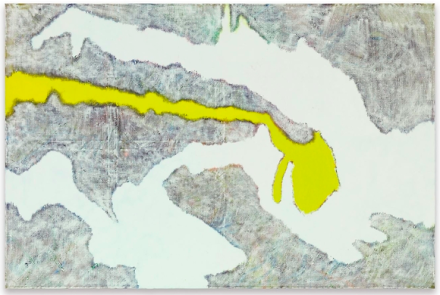 In Richter’s more topographically-focused images, his figures seem locked in a struggle over territory and space.  Projekte und Projektile retains the sense of physical interplay and choreography evoked in the above-mentioned piece, but the forms in question speak as landmasses, subjected to the divisions and relations of borders marked in color.  This painting, one of the most impressive of those included in this exhibition, depict relations between inside and outside while testing the viewer’s ability to perceive presence and absence, positive and negative space. 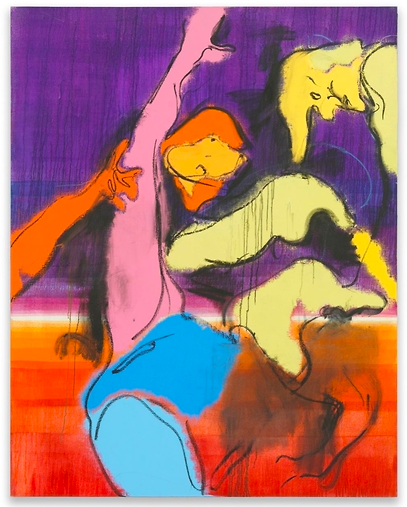 This exhibition represents the first time Richter’s work is on display in a non-institutional setting, running concurrently with an exhibition at the Louisiana Museum of Modern Art, Humlebaek.

The show closes on March 12th.

This entry was posted on Tuesday, March 8th, 2016 at 9:06 am and is filed under Art News, Featured Post, Show. You can follow any responses to this entry through the RSS 2.0 feed. You can leave a response, or trackback from your own site.