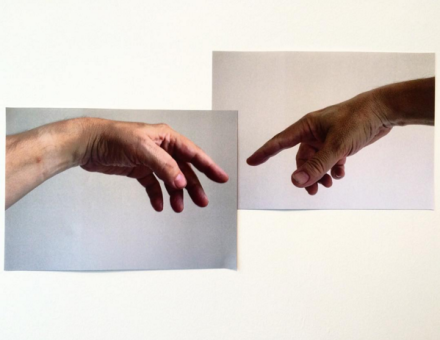 Taking over Hauser and Wirth London for his first solo exhibition with the gallery, Mark Wallinger has brought a nuanced collection of both new and recent works, showcasing the artist’s unique interests in the associative and perceptual variations of one’s encounter with the surrounding world, mixing together explicit psychoanalytic technique with less concrete forms that trace the body’s relation to the urban environment, or the preservation of time through similar modes of engagement. 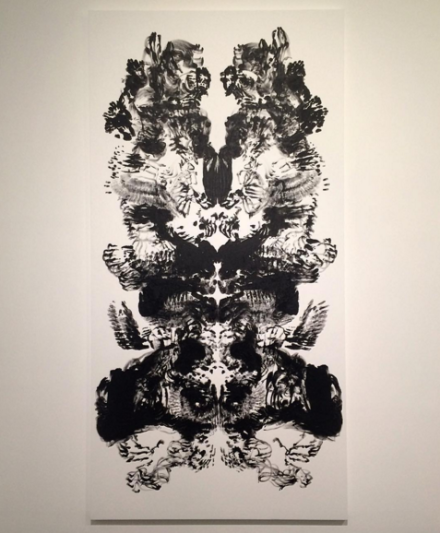 The show is dominated by references to Freud, beginning immediately with Ego, a coyly assembled pair of iPhone photographs showing the artist’s hands, posed to re-create the hands of God and Adam in Michelangelo’s Sistine Chapel ceiling.  The work is comically flippant in its slavish reproduction of the work, as the high-quality digital image emphasizes its dissonance against the painted image, rapidly reproducing a dramatic image that is both inherently personal and widely accessible at the same time.  These works are countered by his Id paintings, a series of works executed on canvas by Wallinger’s own body, using his paint-covered fingers to trace blurred, symmetrical forms that recall Freud’s ink-blot tests.  Much in the same way, his work drives at the core of both technique and history, playing on the interaction of recognizable form with the expressive capacities of his own body. 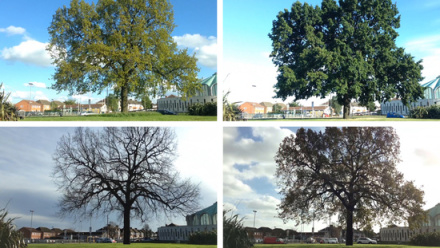 The references to Freud’s psychoanalytic structure are continued in the South Gallery with Superego, a mirrored, rotating sign that references that of the New Scotland Yard logo, while replacing external authoritative references with internal ones.  The formal reference to the police state mingles with the act of self-reflection, underscoring the human psyche’s impetus towards self-regulation, while extending that same model outwards into the forms and frameworks of society. 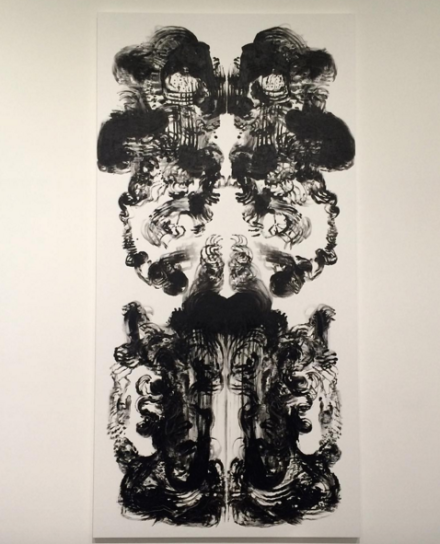 Wallinger’s operations on the human acts of representation, projection and reflection are dominated in large part by their modes of capture and execution, most notably by the portability of his materials.  His videos and photos are captured using consumer-grade media, and his paintings are executed through the limits of his own corporeal form, both simultaneously tracing the limits of the human form, and its attempts to exceed them through prosthetic devices (the camera as both eye and archive, the canvas and paint as a mode of measurement). 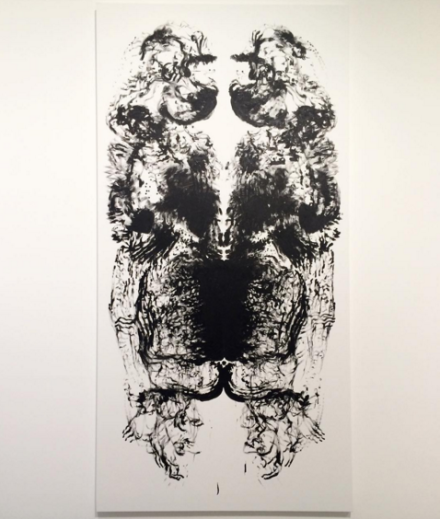 Yet at the same time, the work emphasizes the persistent associative behaviors of human subjectivity against its relatively objective modes of composition.  For Wallinger, the pieces are expressive only in their encounter with the viewer’s own acts of recognition and interaction, and, perhaps more importantly, their confrontation with the opposition of internal or external signs.  It is only in momentary inflections, like that of Ego, where Wallinger, quite literally, tips his hand, showing the subtle interrelations of form and memory that the artist operates within and against.

ID is on view through May 7th. 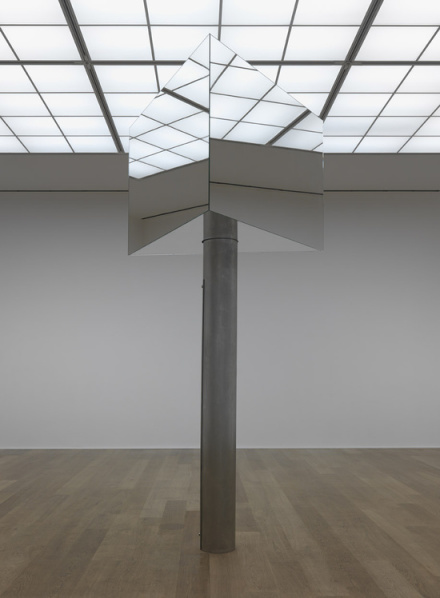 This entry was posted on Wednesday, April 27th, 2016 at 12:59 am and is filed under Art News, Featured Post, Show. You can follow any responses to this entry through the RSS 2.0 feed. You can leave a response, or trackback from your own site.