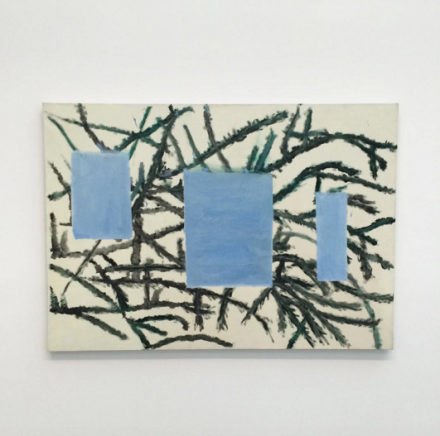 Compiling a selection of works from the career of Belgian painter Raoul De Keyser, David Zwirner’s exhibition Drift is a notably rich entry in the gallery’s relation with the late artist.  Mixing a series of late works from just before his death in 2012 with a series of pieces working on a longer scale across his career from the 1990’s onward, the show is a subdued, yet rewarding offering, allowing the artist’s variations in interest and technique to converse across several decades. 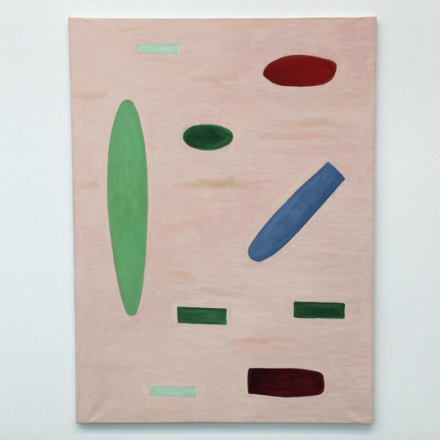 De Keyser’s work functions on gradual scales and progressions.  Even in compositions where he quickly shifts gears between gesture or hue, the works themselves lean on subdued tones that present their variations as a gradual movement outwards from the canvas’s original, spotless form.  Even the white ground of his works are slurred with prior marks, subtle hints of his hand, and smooth curves of shading that blunt sudden changes of color in pieces like Come on, play it again nr. 2, these interrelations of color and space take on momentary clashes and encounters, held together by a uniformly pale color palette.  In a selection of later works, the artist’s blurs of charcoal mix against deep pools of oil paint, creating gradations and nuances of form that pull the work’s disparate elements closer together.  Conversely, Bern-Berlin hangend is decidedly aggressive in its execution, forcing several sky blue panels into conversation with what appear to be snaking branches.  The result is a work that seesaws quickly between focal points. 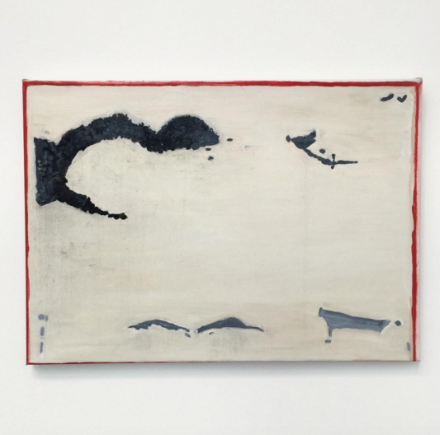 Elsewhere, Keyser pushes this sense of formal progression in other, more visually austere ways.  Closerie I (Berliner Ensemble) is a strikingly simple work, moving through a descending series of lines and crosses that nevertheless offers nuances of shading and line emphasis against the cool off-white of his negative space.  For De Keyser, this interplay of ground and figure presents more than a space for conceptual operation, but a dialogical mode of working in its own right.  Both line and plane are interlocked by their contrasts or blurred edges, and the careful attention to the changing hints of coloration in each inch of the canvas often forces the viewer to negotiate between each element, and to explore the careful markings and shifts in tone that occur throughout the piece.  In an earlier untitled piece from the 1970’s, this same interest is presented in more extreme ends, as red and blue panels equally invite an appreciation of the space around the works, filling in this opposition with white space. 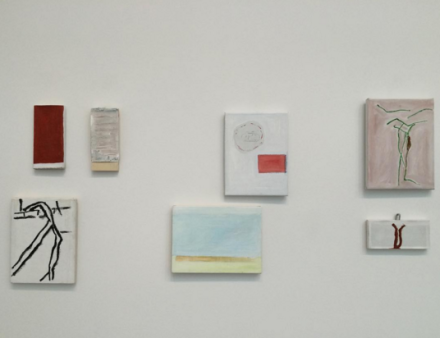 To label De Keyser a “painter’s painter” is something of a reductive statement, missing out on the artist’s subtle conceptual threads and understanding of broader spatial concerns within the gallery itself.  Yet the notion of the painterly gesture itself, and its consistently shifting and folding possibilities for expression in relation to its past work and current grounds, underscores De Keyser’s masterful awareness on the canvas.  Presented here, his work is offered ample space, and time, to speak.

The exhibition is on view through April 23rd. 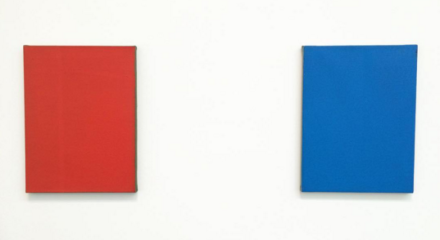 This entry was posted on Friday, April 15th, 2016 at 12:53 pm and is filed under Art News. You can follow any responses to this entry through the RSS 2.0 feed. You can leave a response, or trackback from your own site.