Paris — Friedriech Kunath: “My Loneliness Shines” at VNH Gallery Through May 22nd, 2016 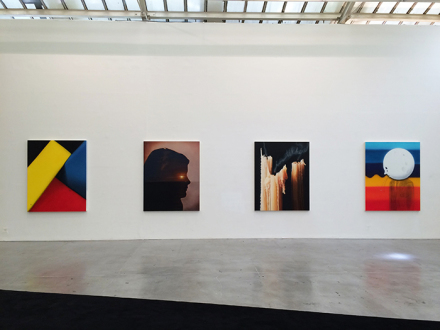 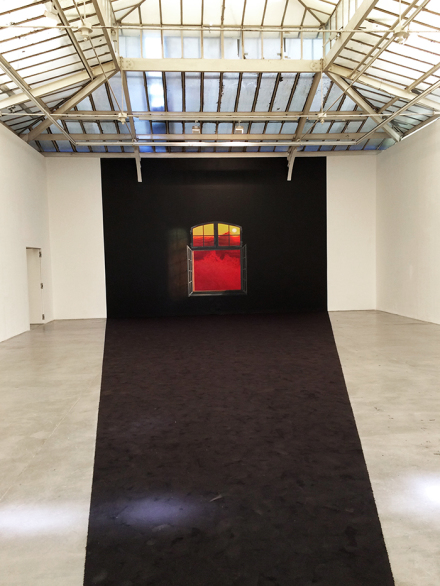 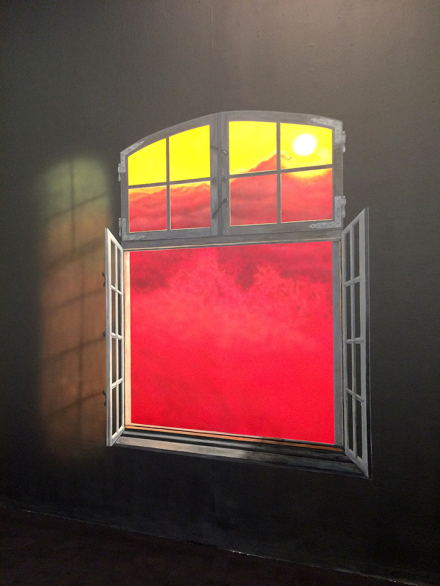 Kunath draws his energy and inspiration from the flow of the contemporary world, and the permanent movement of new technologies, and his works reflect this situation using citations, collages, recycled material and references from diverse sources of inspiration.  Nurtured by a classical artistic education, he produces often unclassifiable work somewhere between hyperrealism and surrealist humor, often combining modern elements and threads of practice with deep dives into German romanticism to walk narrow lines around concretized historical grounds.  A number of his paintings in this show were composed with richly colored sunsets and seascapes (as in Our Chance (2015-2016), or I’m Glad I’m Not Me (2015), utilized in a manner that evokes the disappearance of Bas Jan Ader at sea in 1975.  Operating in the area between consciousness and dreamscape, the impressive installation Thug life (2016) unfurled a black carpet across the entire room and up the wall, adorned with trompe-l’oeil windows, red and blazing. 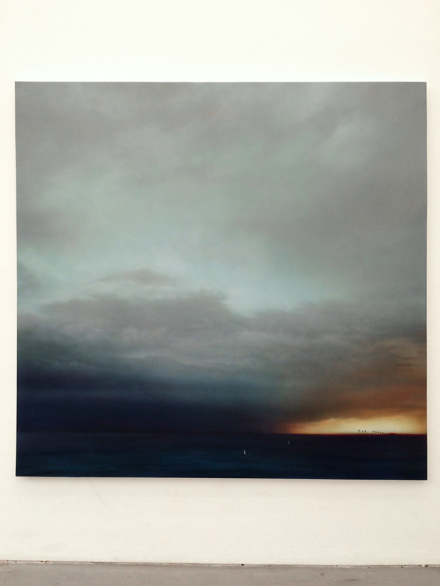 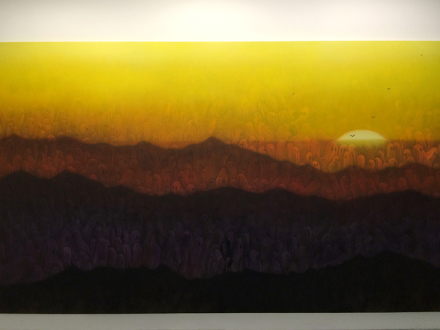 Living and working in Los Angeles, Kunath’s work is influenced by the city’s reputation as a manufacturer of images, fictions, and illusions, which in turn seep into his highly descriptive visual language.  His is a world built from fragments from cinema, television, literature and music, from fragments and momentary inflections of mass culture.  Through the strangely alluring, almost prismatic application of kitsch, Kunath equally invokes human matters like fraternity, romance and solitude.  I am a stranger here (2015), for instance, where a feminine figure waits and wonders at her window by the moonlight, or I will try to be more romantic (2015), a dark painting of a city at night, with neon, hand-written pink letters, represents the sentimental pathos that he frequently employs. My Loneliness Shines, which titles the show as well as both a neon sculpure (2016) and a painting (2015-2016), is the incarnation of the melancholic spirit that inhabits his body of work. 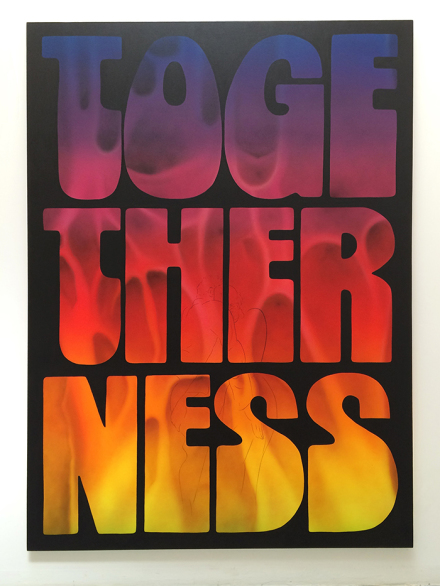 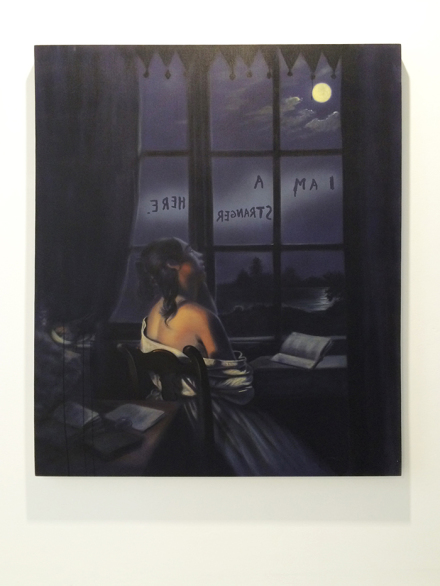 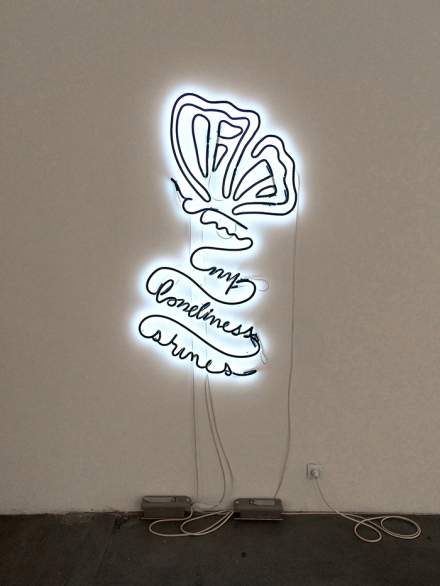 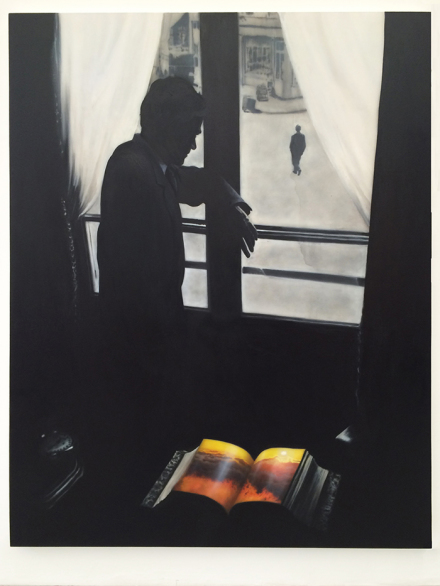 Kunath’s compositions are free from any rules, and each piece in this show took on different levels of reading. Dreams and memories crossed each other as if superimposed upon each other, while elsewhere, he injected strange bodies and texts, from handwritten messages to cartoonish characters.  Lonely humans bachelors, melancholy cowboys, and others made their appearances in each work, sometimes repetitively throughout the show.  We get along, mostly (2016), for instance, showed a drawing of a bedroom that seems to float in the painting of a landscape, while I am really into the world lately (2015), composed with various mediums and layers, represented the body of a human, with the head of a sad moon.

The visual effect of the accretion of layers in Kunath’s artwork is remarkably efficient. Always balancing between conceptual good taste and caricature, the show explored life hazards and meanings, raising questions about the obvious through a mix of various clichés combining past and present, happiness and melancholy, emotion, and high and low culture. 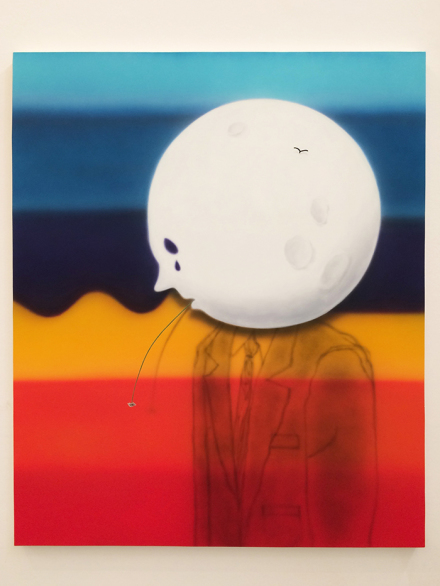 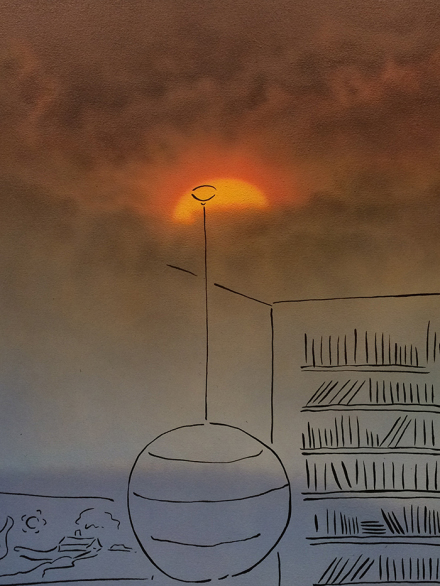 This entry was posted on Friday, May 20th, 2016 at 12:00 am and is filed under Art News, Featured Post, Show. You can follow any responses to this entry through the RSS 2.0 feed. You can leave a response, or trackback from your own site.