New York— Danny Lyon: “Message to the Future” at the Whitney through September 25th, 2016 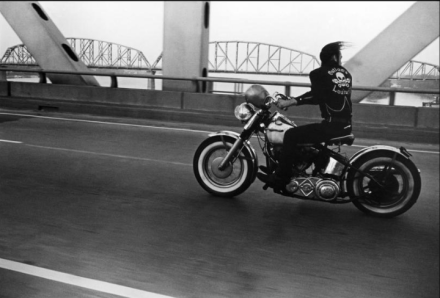 Exhibited at a critical moment of heightened tensions regarding civil liberties in America, Danny Lyon’s retrospective exhibition transforms the Whitney’s fifth floor into a space for cultural reflection.  Set against a backdrop that confronts pertinent issues regarding violence, incarceration, and inequality, Lyon’s work chronicles a complex photographic history of the racial, social, and political issues that are currently challenging the United States anew in the 21st Century.  The serious tone of his work is met with the intimacy in which he engages with his subjects, offering a sense of hope while putting a deeply human face on subjects who are marginalized and oppressed. 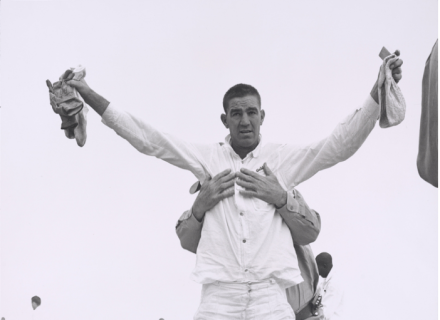 Beginning his career with work surrounding the African-American Civil Rights Movement, Lyon was a member of a revolutionary group of photographers who rose to prominence in the late 1960s.  Joining Mary Ellen Mark and Larry Clark in a rejection of the journalist’s critical distance, Lyon embraced a style of deeply personal documentary photography in attempts to transcend the role of spectator.  Lyon often participated in the cultures he photographed, in one instance even becoming a member of the Chicago Outlaw motorcycle gang to capture more authentic, embedded documentation of the worlds he passed through.  The 175 photographs on view, coupled with related films and other documentary content, show trace his attempts to capture and represent members of society previously ignored or victimized by the repressive mechanisms of Cold War America.  Whether they are Civil Rights workers, prostitutes, or children in Colombia, the show’s thoughtful curation seeks to inspire by highlighting the human spirit in the American fabric, while elevating the experiences of those who are usually voiceless. 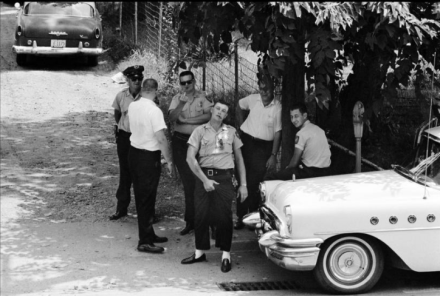 Raised in Kew Gardens, Queens, Lyon graduated from the University of Chicago in 1963 and began working as the first staff photographer for the Student Nonviolent Coordinating Committee (SNCC).  A self-taught photographer, he was at the front lines for major events throughout the Civil Rights Era.  Arguably his most important works are those documenting the confrontations between protestors and police officers at rallies and sit-ins, where many of his photographs could be mistaken for images today of marches in Baltimore and Baton Rouge protesting police brutality. The Arrest of Taylor Washington, Atlanta, 1963 is one of his earliest works, highlighting a police officer holding an African American high school student in a choke hold.  As the mainstream media and social media platforms are continually flooded with concerning images of social unrest the works from this series address a stark reality that continues to plague American society. 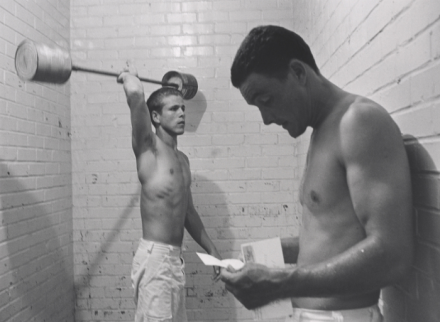 The show focuses primarily on Lyon’s early career, including a comprehensive study on the American prison system through the lens of a group of Texas facilities between 1967 and 1968.  The artist was granted special access to conduct interviews and photograph inmates, even befriending some of the men he met, which is evident in the tender touch to his portraits. His images tell the stories of prisons in a single area, but with the hope of the viewer extrapolating the issues of personal freedoms onto a national scale.  Yet Lyon’s lens extends beyond the individual, chronicling the transformation of New York City between 1966 and 1967 with his series “The Destruction of Lower Manhattan.”  Around this time, many 19th century buildings were being demolished in order to build the World Trade Center, and the images’ presence in the new Whitney building isn’t lost on the organizers.  Drawing attention to the ever changing architectural landscape of Manhattan, the images pay homage to demolition workers and individuals who abandoned the areas of destruction.  Their stories are elevated by the presence of a new space for art and culture, and the reminder of the continuous growth and change of New York. 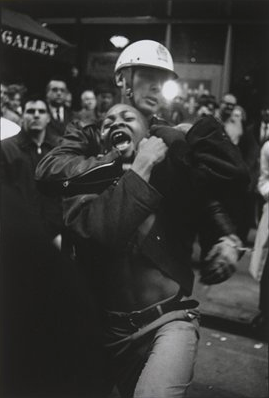 In his seventies and still actively working, Lyon’s continues to produce provocative images such as Occupy Demonstration on Broadway, Los Angeles, 2011 that connects to themes of civil unrest and cultural anger in his early work.  His body of work acts as a window of entry into grander issues, presenting ‘the existential struggle to be free,’ whether it is an impoverished individual in Knoxville, Tennessee,  or an individual he met on his travels through China and South America.

The exhibition is on view through September 25th, where it will then be traveling to the Fine Arts Museums of San Francisco from November 5th through April 30th. 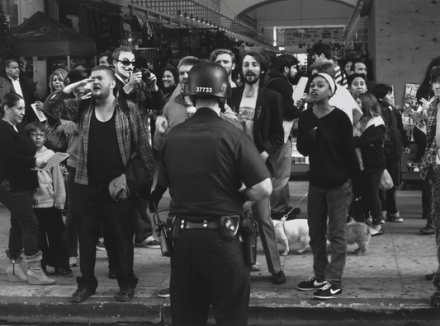 This entry was posted on Wednesday, August 31st, 2016 at 12:00 pm and is filed under Art News, Featured Post, Show. You can follow any responses to this entry through the RSS 2.0 feed. You can leave a response, or trackback from your own site.