New York – “I Talk with the Spirits” at Marianne Boesky Through August 12th, 2016 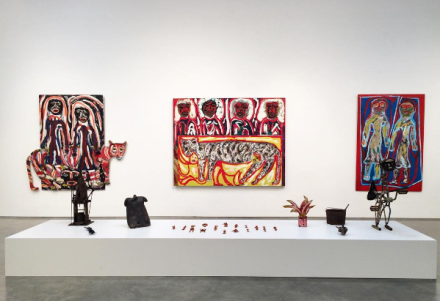 Spanning both exhibition spaces in its expanded West 24th Street home, Marianne Boesky has opened a new show of works exploring the potency of sculpture and painting, ranging from self-taught artistry through to powerful, yet nuanced meditations on the act of creating as a spiritual force in and of itself.  Drawing its title, I Talk with the Spirits, from a piece by the famous jazz saxophonist Rahsaan Roland Kirk, the show mimics Kirk’s multifarious approach to the creation and execution of his artistic vision, drawing on contemporary modes and materials in conjunction with a deep-rooted, and highly studied perspective on ancient forms and practices. 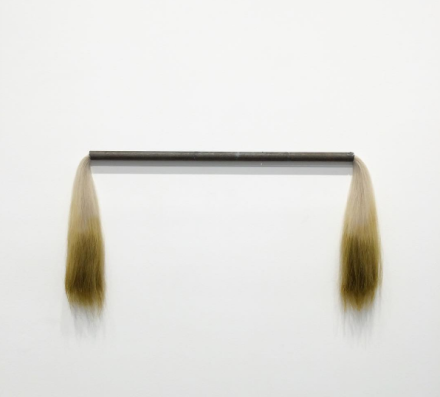 At the center of the exhibition is a striking collection of works by artist Lee Mullican, founder of the San Francisco-based Dynaton group.  Mullican would frequently draw on the art and artifacts of Native American and Pre-Columbian South American cultures to form the linguistic base of his works, often transposing these elements through a more contemporary interest in 20th Century Surrealism and the teachings of Alan Watts, who introduced Mullican to the tenets of Zen Buddhism.  The result was a series of detailed compositions that combined a clear awareness of New York School abstraction and these deeper spiritual and archaeological studies.  Mullican’s compositions and studies draw on natural forms and brusque markings that recall wall paintings and overlaid marks as if made by centuries of artists.  Hands and geometrical forms are executed in rough pigments that recall an immediacy and simple technique that equally pushes them into a suspended engagement with time, one where the hand moving across the canvas touches on multiple eras and concepts at once. 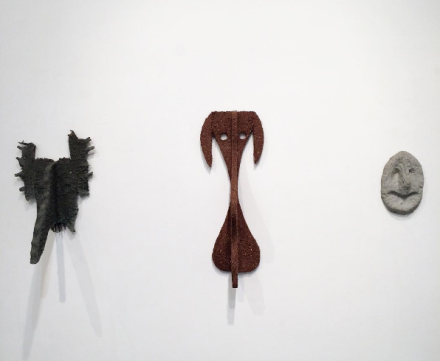 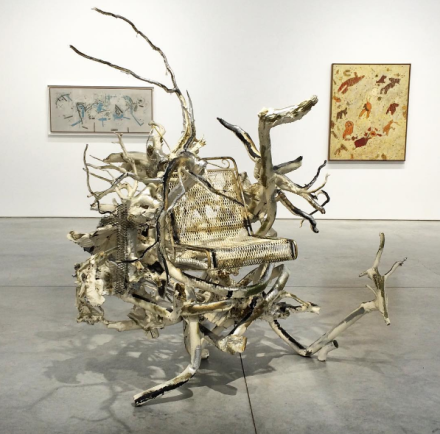 A similar engagement with material is presented in the work of Thornton Dial, who also has a number of pieces on view.  The pieces on view by the self-taught Alabamian turn a similar eye to the transcendent in the everyday, yet execute their operations from the opposite end of the visual spectrum.  Dial’s materials are lawn chairs, cans, bicycle parts, and other reclaimed materials, presented alongside canvases and paintings that vibrate with a certain spiritual enthusiasm.  Dial’s work is clean in its execution, using basic forms and broad strokes of paint to realize his subjects in glowing primary colors.  Their sense of craft and shape is striking in contrast with their reclaimed materials, with a spare vocabulary that utilizes each movement and mark in pursuit of a powerful expressive energy, particularly in a trio of canvases, Slavery to Freedom, which distill natural and tribal imagery in contrast with slight inflections of death and modernity that trace the African American experience with great energy, yet a minimized approach to time and space within the work. 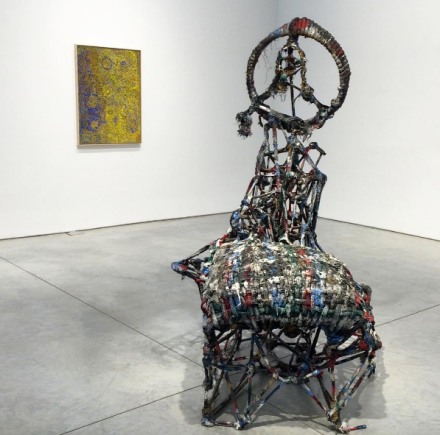 These two artists find a mediating force in the work of Jay Heikes, who similarly creates artifacts of indeterminate time and space, drawing on the formal imagery of the dated artifact, the object removed from its own use value and context.  Heikes’s works, which take on a more playfully illusory approach to the idea of the spiritually-imbued piece, utilizing techniques and imagery from multiple cultures to create something of a shared iconography of the past, where a more universal spiritual potency bleeds through. 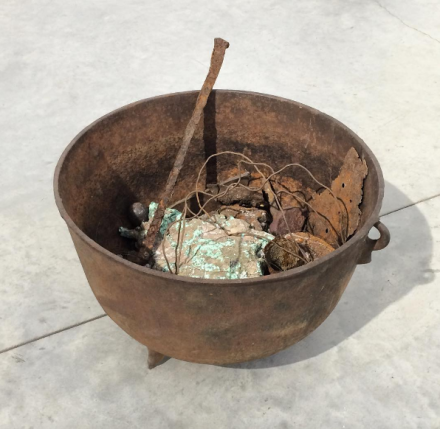 It’s this sense of shared vitality, of a shared mythology moving beyond any concrete location, time or object, that gives the exhibition at Marianne Boesky its energy, and turns the viewer’s eye towards a more universalized sense of self.

I Talk with the Spirits closes August 12th.

Read more:
I Talk with the Spirits at Marianne Boesky [Exhibition Site]

This entry was posted on Thursday, August 11th, 2016 at 4:05 pm and is filed under Art News, Featured Post, Show. You can follow any responses to this entry through the RSS 2.0 feed. You can leave a response, or trackback from your own site.