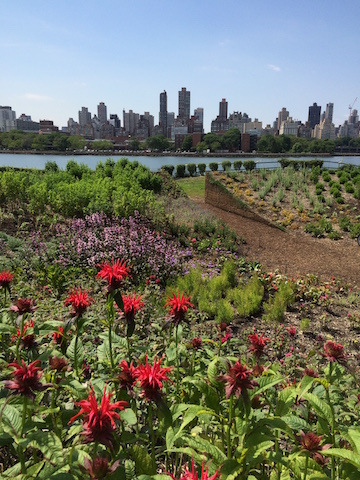 Coinciding with Socrates Sculpture Park’s thirtieth anniversary this summer, LANDMARK brings together an exhibition featuring projects by Meg Webster, Hank Willis Thomas, Brendan Fernandes and Abigail DeVille, among others, for a show that both reflects on the park’s history, and projects each artist’s own vision onto its open expanse.  The park’s evolution from a landfill and illegal wasteland to an exhibition site with strong emphasis on three-dimensional works was spearheaded by Mark di Suvero, whose studio still resides alongside the park at the point where Astoria meets the East River.  The outdoor museum benefits from its unique ambiance and the history of its neighborhood, presenting works that interact with nature, sunlight and the local community. 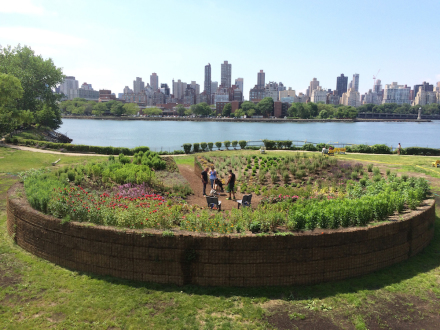 The most striking example of this vibrant conversation comes with Meg Webster’s Concave Room for Bees, a seventy foot wide and five foot high bowl carved into the earth, inviting visitors inside to observe its ever-changing blossoms.  Comprised of three hundred cubic yards of fertile soil, the ring-shaped installation houses varieties of flowers, herbs and plants, each of which continues its unique cycles of growth and death.  Visitors, immersed in an abundance of colors, odors and botanical visions, experience multilayered stimuli, enhanced by the occasional visit from bees and other insects for the pollination and perpetuation of these flowers. Webster, who generally exhibits works in a similar vein inside white cube spaces (one of which was recently on view at Paula Cooper), utilizes the venue’s offerings to deliver an arresting tour-de-force. 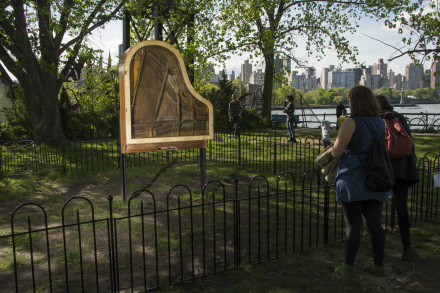 Jessica Segall’s Fugue in B pays homage to Astoria’s rich history, which includes the footprint of major piano factories such as Steinway, while remaining connected to the park’s natural texture.  The artist transforms a salvaged piano harp into a hive for bees to live in and interact with the instruments’ chords, while subtly offering a natural vector for the proliferation of Webster’s piece as well.  A speaker broadcasting the bees’ interaction with each other inside the hive, and their movements over the pieces of the harp, ultimately realize something of an extended concert, a wealth tones and humming noises that emphasize the meditative nature of the park. 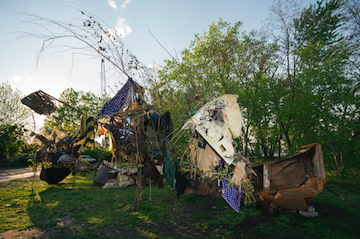 Known for his sarcastic text-based works that ridicule patriarchal systems, Cary Leibowitz projects his usual tone onto the institution itself, claiming the park’s Bobcat loader as his blank canvas, and shrouding the vehicle with custom-made bumper stickers emblazoned with humorous mottos lambasting the art world or current U.S. elections. Almost unrecognizable in its new look, the loader is stationed at the entrance to the park, playing on both its utilitarian nature, and the structural aspects of the park itself. 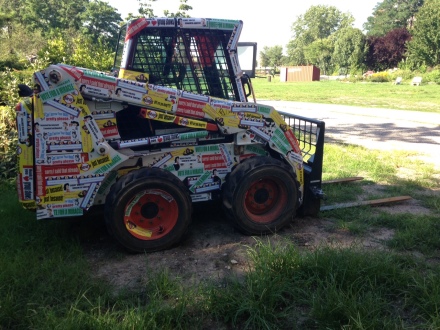 Combining this range of voices against the backdrop of the Manhattan skyline, LANDMARK is on view at Socrates Sculpture Park through August 28, 2016.

This entry was posted on Sunday, August 14th, 2016 at 12:00 pm and is filed under Art News, Featured Post, Show. You can follow any responses to this entry through the RSS 2.0 feed. You can leave a response, or trackback from your own site.