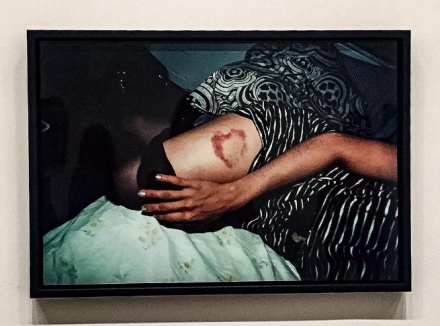 Few bodies of work have left an impact on the development of photography in the way that Nan Goldin’s Ballad of Sexual Dependency did when it was first presented.  The ever-evolving compilation of photographs from Goldin’s life and travels between New York, Boston, Berlin, and elsewhere shows both fragility and joy, lust and love, life and death through a deeply personal focal point, as Goldin placed her own friends and familiars before the camera, and then reflected them back towards themselves during a series of slideshow performances in which she projected the images in a series to gallery audiences. 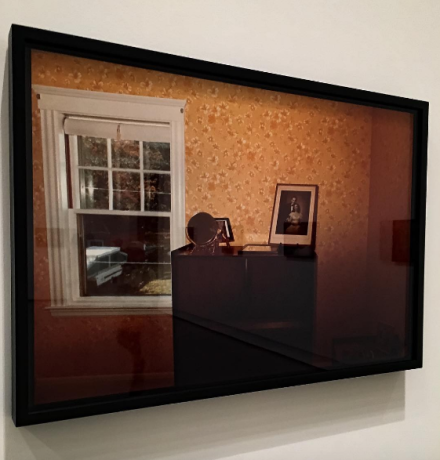 This month, MoMA has reprised the Ballad in its second floor galleries, compiling nearly 700 photographs from the series to reflect on the course of the artist’s work, and on the creative life of New York City through the artist’s lens.  The original 35mm print is on view in the space, moving through the full collection of photographs, joined by a collection of framed prints that offer a lingering glance at some of the more powerful images from Goldin’s series, freezing moments from her seemingly endless stream of images for a lingering, and often deeply private sense of reflection. 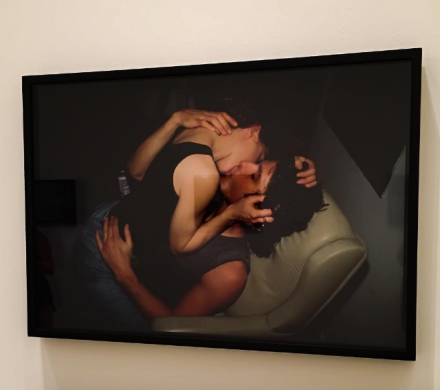 Diaristic in execution, the works showcase Goldin’s life in moments and fragments, bl0wn up to an impressive scale on the walls of the exhibition space.  Drunk revelers, smiling faces and subjects pausing for a cigarette move across the wall, a parade of images that document the changing faces and landscapes of downtown New York City during the 70’s and 80’s, and the often stark realities that joined this vivid sense of revelry.  In one work, Goldin shows an image of herself, one eye bloodshot and bruised from a domestic assault with a man she had been in love with, and who she had been unable to make a break with.  The image is tragic and curt, refusing both to shy away from the violence her lover has wrought on her, and her admitted inability to walk away.  Emotional trauma surges forth from the image, yet her gaze remains defiant in its directness, reclaiming her own body from the loss of power this violence has attempted on her. 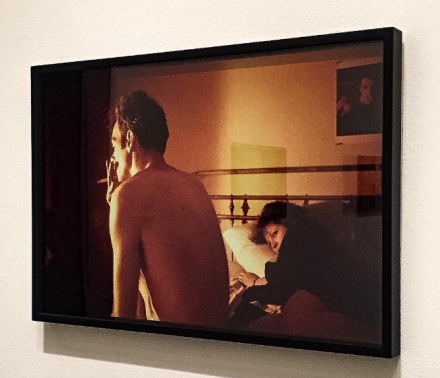 Elsewhere, Goldin’s camera turns towards the AIDS-crisis, documenting wasted bodies and the emotional aftermath that the epidemic caused among New York’s alternative and underground communities.  Quiet, desperate moments show patients wasting away, or sitting quietly with their partners in a moment of loving embrace.  Coupled with images elsewhere of drunken passion and wild apartment parties, the result is a tragic, yet defiant impression of the 1980’s, where countless subjects continued to assert themselves in the face of this crippling disease.  Goldin’s eye is perceptive in her understanding not merely of the human cost of AIDS, but equally in its impact on the communities it touched, how the death and darkness of its impact wrought a wake of fear across the world she lived in. 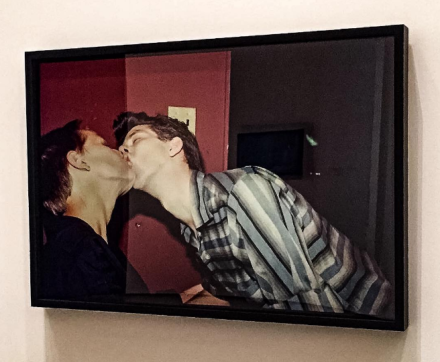 Goldin’s work is an essential document for understanding the downtown communities of the 1970’s, as much as it’s a milestone of the photographic practice itself, utilizing portable cameras and the sense of punk urgency during the era to show her world in all of its contradictions and poetic moments.  Even in the stark confines of MoMA, this vitality remains readily apparent.

This entry was posted on Thursday, August 11th, 2016 at 3:32 pm and is filed under Art News, Featured Post, Show. You can follow any responses to this entry through the RSS 2.0 feed. You can leave a response, or trackback from your own site.