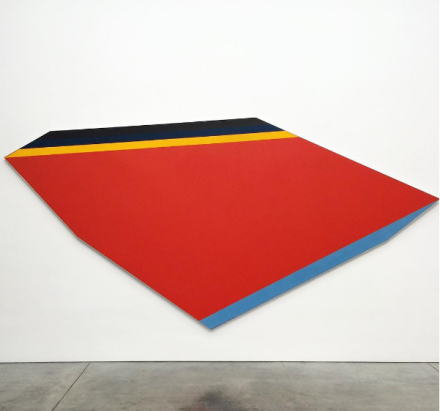 Like many of the forms of 20th Century abstraction, the shaped canvas invites both dedication and constant reinvention, a technical fold in the painterly language that allows an artist to work between the picture plane/mark-making relationship of traditional practice, and the more sculptural elements of the art form that have developed alongside critical reappraisals of the medium since the historical avant-garde.  Twisting the canvas and the artist’s gestural vocabulary around edges and into curious re-examinations of space, it has remained a core element of the craft ever since the advent of minimalism pushed a new language of space both within the canvas, and around it. 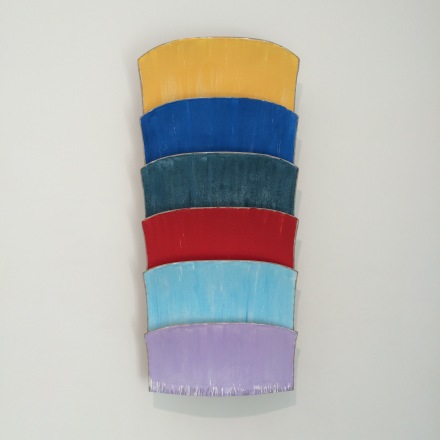 This history of the shaped canvas, and the varied expressive capacities it holds for both current painters and more heritage artists, is the subject of Luhring Augustine’s summer exhibition, Shapeshifters, drawing from a selection of artists that run from early post-war investigations to works made mere months ago. 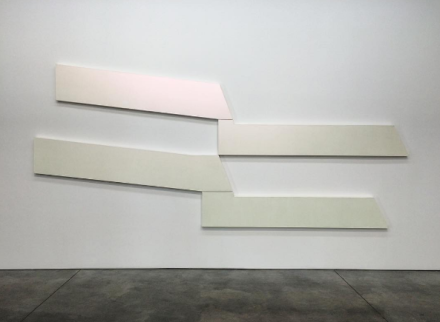 The exhibition makes fascinating use of the gallery’s Chelsea exhibition space, breaking the works into a progression of rooms that grow gradually smaller and more intimate as the visitor passes through the show, ultimately concluding in a small chamber with works by Joanna Pousette-Dart and Joe Bradley paired against an erratic Jeremy DePrez piece just finished this year.  The forms and execution varies greatly, and works often embrace the formal conversations of their neighboring works.  DePrez’s huge gobs of paint offers a sudden shake up after viewing a staid Steven Parrino work, but a nearby piece by Ruth Root, mixing patterned fabric and a variety of paints, returns the viewer to a flurry of action.  In each, the respective curves and hard edges of the canvases act as something of an echo to their painterly material, as curving line work or optical effects play against the white wall that often darts out from spaces and gaps in the composition’s arranged pieces of canvas.  Martin Kippenberger’s N.G.D. hellblau, from 1987, is a prime example, as gingham fragments are repositioned as a dizzying optical field, forming concentric rectangles around the wall’s negative space. 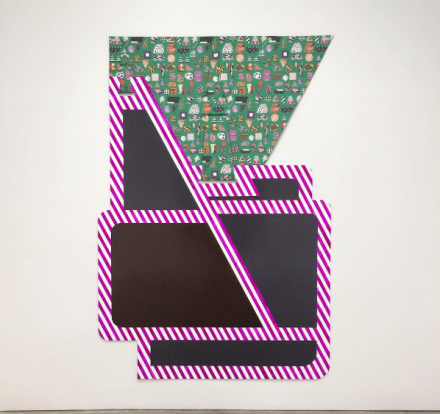 These relationships underscore a striking relation to the wall itself, using the gallery to stand in for a canvas’s negative space in a manner that allows an appreciation of the work’s potential as sculpture, or the painting as an act of rearranged space.  Yet it’s only by contrast with the marquee works in the first room, nearly monumental works from David Novros and Frank Stella, for instance, that drive this understanding home. 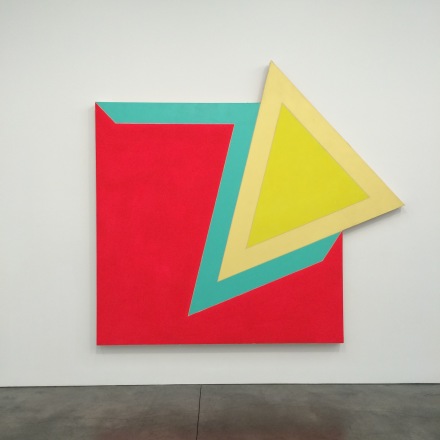 Considering their impressive scale, one is immediately reminded of the early influence  of minimalism in the practice, specifically in Novros’s piece, where parallel bars of reflective canvas create a gleaming contrast of space and depth on the gallery wall, or Kenneth Noland’s Adjoin, which seems to surge out from the wall based on its tromp l’oeil execution.  These elements play into the canvas as an exploration of the exhibition space itself, an architectural frame that these artists sought to upend and reposition.  Yet it’s also in Noland’s work that one can also detect a return to the internal composition as well.  Moving on from this piece, the show’s further chambers underscore the gradual reincorporation of painting itself within this new framework, exploring its form not merely as an architectural structure, but as the expression of space within these structures, pushing the history of painting out into the space around the canvas.   Considering the show’s understanding of this ever-evolving engagement with the canvas as material, its name could not be more accurate.

Shapeshifters is on view now through August 12th. 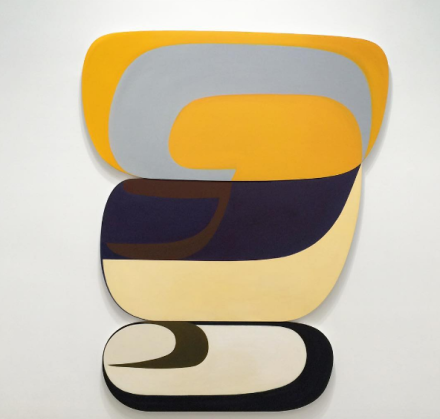 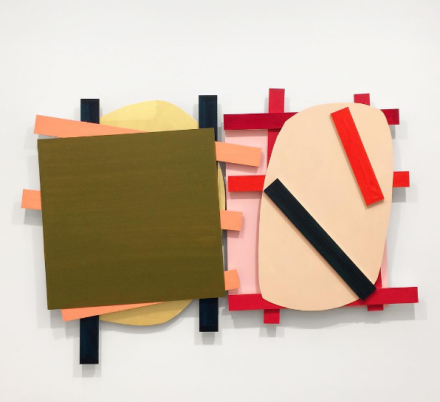 This entry was posted on Saturday, August 6th, 2016 at 4:00 pm and is filed under Art News, Featured Post, Show. You can follow any responses to this entry through the RSS 2.0 feed. You can leave a response, or trackback from your own site.