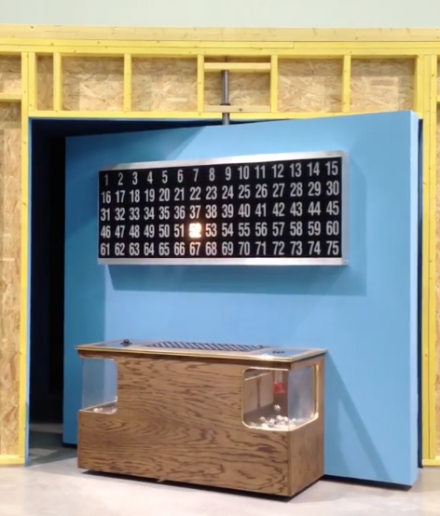 Currently on view at Palais de Tokyo for its annual summer exhibition, Argentinian-born, New York-based artist Mika Rottenberg presents a broad selection of works, bringing a series of her expansive installation and video works, alongside new commissions, to the Paris institution’s grounds.  Centered around the artist’s recent Venice Biennale commission, NoNoseKnows, the show runs across a broad variety of the artist’s work over the last decade, exploring themes of production, economy, and the body through her own uniquely madcap lens. 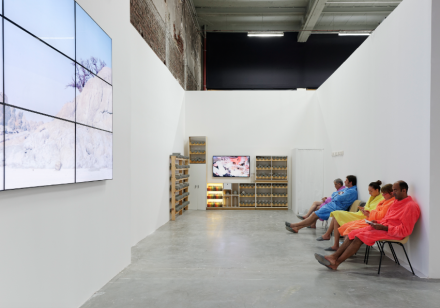 Rottenberg’s work almost invariably centers the body as its point of departure, of the peculiarities of the human form turned away from rote capitalism and used in the production of surrealist vignettes.  In Seven (2011), a series of women exercising through vaguely ritualistic operations are used to generate a sort of “chakra juice,” which is then transmitted for use in the Kalahari desert.  Elsewhere, her work Squeeze shows a series of female laborers harvesting food, human material and other objects in the production of the work’s final sculpture.  Throughout, these objects are suspended in their own internal logics, produced through the act of documentation and Rottenberg’s own orchestration, resulting in the disintegration of easy concepts of a beginning or ending for their existence. 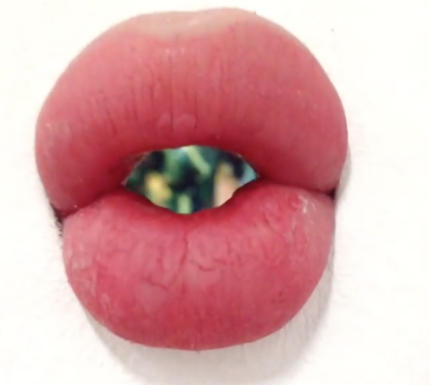 A similar phenomenon dictates NoNoseKnows, one of the central works of the show, where Chinese workers labor in the creation of pearls by stuffing mussels with the tissue of their dead compatriots, all the while sustained by plates of pasta sneezed out from a adjacent female’s nose.  The act of wealth generation by violence and the subjugation of the body is unavoidable, yet Rottenberg’s bizarre realization makes the work all the easier to digest, and to reflect on. 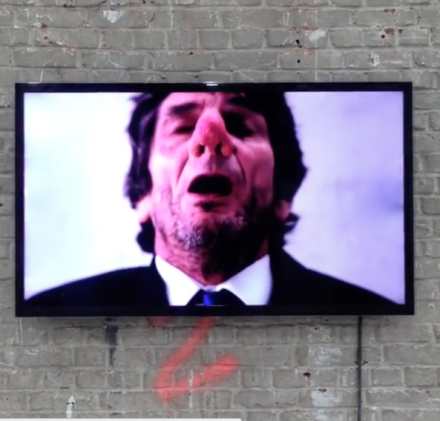 Yet the artist also works in momentary pauses in her installation.  In one corner, an unassuming pair of lips open to reveal a secluded, mirrored room, where warped, undulating patterns create a hallucinatory refrain in the progression through the show, and echo back to earlier works like Fried Sweat, also on view.  Similar variants are offered by the artist’s object-based accompaniments to her videos, like a series of ponytails, robotically flipping up and down in choreographed motion. 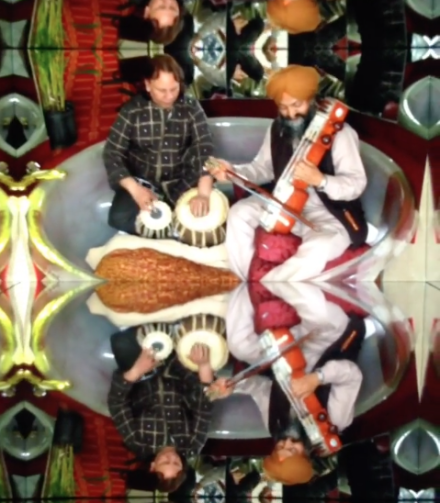 What places this exhibition of Rottenberg’s work on its own plane is its distinctly modular nature.  Her works, which so clearly utilize combinations of stationary installation-based objects and videos that pull the viewer through a psychological landscape that reanimates their respective purposes in the gallery, contribute to even larger narrative arcs when placed in close succession.  A viewer wanders from work to work, passing through the rotating bingo table of Bowls Balls Souls Holes to view the accompanying video, yet suddenly, with a few steps, may find themselves thrust into the world of the piece, Seven. 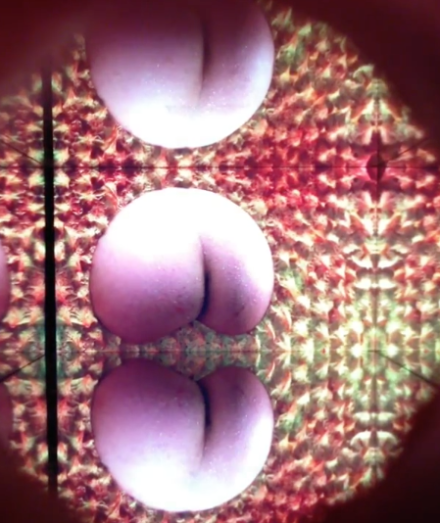 These parallel environments ultimately serve to reinforce the subtle feminist undertones of her work, where the female body serves as both a site of fantasy and economic production, ultimately resulting in a sense of the produced object as both mythical, and unusable.  Presented here, as an expanded universe, the scale of Rottenberg’s presentation seems to offer new vistas, a site where the sheer scale of operation hints at a world where these objects are their own ends, a world of absurdist production for the sake of its producers’ own well-being.  It is a world of destabilized economies, a utopia produced by its lack of a center.

Rottenberg’s work is on view through September 11th.

This entry was posted on Monday, August 8th, 2016 at 3:20 pm and is filed under Art News, Featured Post, Show. You can follow any responses to this entry through the RSS 2.0 feed. You can leave a response, or trackback from your own site.