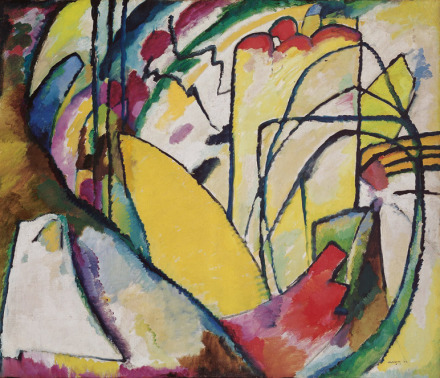 In terms of the various rejections of painterly convention that defined the early decades of the 20th Century, few schools of thought left the same lasting imprint on the act of painting as “Der Blaue Reiter” (The Blue Rider).  The internationally distributed group of artists, Wassily Kandinsky and Franz Marc chief among them, were early entries in the varied schools of thought and practice that sought to change the aesthetic and political energies of their craft through a combination of dynamic invention in their craft, and iconoclastic, ideological fervor in their writing and organization.  Making the case for a practice divorced from rote representation, the pair of artists instead relied on color and line themselves, affording these essential elements a much broader range of expressive capacity and spiritual evocativeness that would ultimately pave the way for much of the century’s adventures into abstraction.

Marc and Kandinsky’s practical theory during the era, and the works they created in conjunction with this movement, are the subject of the recently opened exhibition at Fondation Beyeler, exploring their personal explorations of painterly style and the essential elements of the painted canvas in conjunction with the aesthetic agenda they advocated for.  Much in the same way that the original Blue Rider publication compiled a series of visual touchstones for what the artists themselves saw as new potentials and new visions for the art of tomorrow, the exhibition functions as a rumination on the shared vision of these two artists, and how their concerted efforts ultimately made the case for this same aesthetic future. 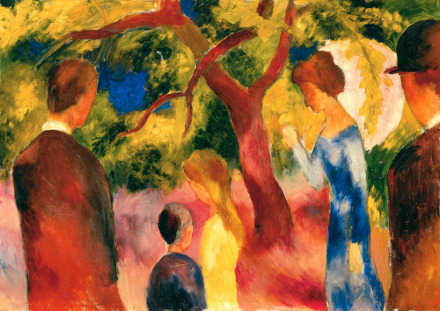 The selections for the show are broad and impressive, pulling together more than 90 works from museum and private collections around the globe, and underscoring the varied intersections of the two artists, placed in conversation with a number of their contemporaries.  August Macke’s Great Promenade, for instance, draws heavily on the same flushes of color and smooth, undulating lines of Kandinsky’s most dynamic pieces of the era, yet dwells equally on more traditional modes of figuration, creating an otherworldly effect that lends the image an increased vitality even as it suspends an immediate reading of the scene itself.  This compares impressively with Kandinsky’s Improvisation 10, a vivid combination of lines and fields of color which prioritizes movement and expressivity of color over an sense of scene or context. 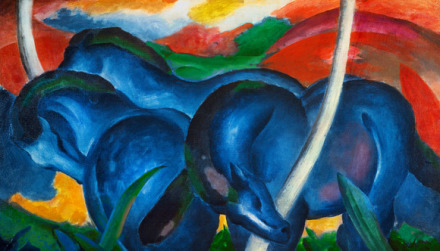 Comparison with works from only a few years makes the artists’ evolution towards this new form all the more clear.  Landscapes and still lifes bubble with an energy provided almost exclusively by the thick application of paint, and subtle blending of colors that gives the image an increased potency, while also working subtle critiques of visual consistency into the canvas itself.  Kandinsky’s Murnau – Obermarkt with Mountains for example, uses bare strokes of paint to trace light and shade across each surface on the work, but equally emphasizes each stroke as just that, an artificial mark rendering the scene presented.  This awareness, following the expressive inclinations of the Impressionists to a new conceptual intensity, underscores the group’s sense of historical continuity, and the potentials for painting that they pushed forward in turn.

Running through the first decade of the century, and into the early chaos of World War I, the show at Fondation Beyeler is a potent history lesson in the developing schools of abstraction during the era, and offers a fitting point from which to trace the later modes of practice that emerged less than a decade later across the continent.  Keeping the show focused yet aware of the broader connections of international networks and creative visions that would shape generations of work to come, Der Blaue Reiter is a fitting exhibition to open the fall season.

This entry was posted on Friday, September 16th, 2016 at 12:05 pm and is filed under Art News, Featured Post, Show. You can follow any responses to this entry through the RSS 2.0 feed. You can leave a response, or trackback from your own site.