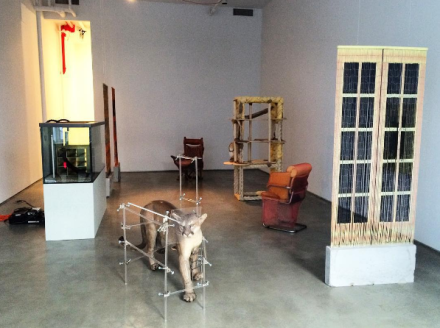 The current exhibition at Team Gallery, Dolores, captures a series of disjointed, often confounding narrative arcs, and places them into close conversation through each piece’s respective architectural and spatial implications.  Drawing on the various trappings and appointments of modern domesticity, the show, curated by Todd von Ammon, twists familiar forms and functions through a variety of technical and visual alterations. 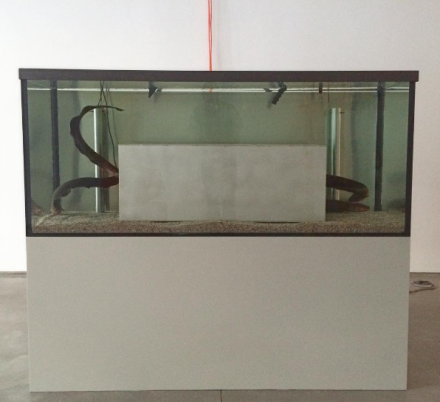 Throughout the exhibition, the modern home appears and reappears as a suspended, almost ghostly presence, often in conversation with a more wild, animal energy that often drifts into the realm of the literal.  This is perhaps most clear in Max Hooper Schneider’s Dielectrix I: Division Electrophorus, for instance, which presents a glass fish tank with several electric eels, animals whose ability to generate an electric current powers the gallery’s incandescent lights.  In another corner, Anicka Yi’s Ghosts In The Terroir presents a stuffed mountain lion, held in place by a series of medical implements and metal pipes.  In each work, a certain wild energy, held in check or commoditized by the demands of its exhibition, shows a subject locked into a rigid negotiation with both its own corporeality, and the technical structures used in both its preservation and its examination or quantification.  These are works made to be examined or applied, despite their implied functions, or rather, their implied “life” beyond the gallery itself, objects suspended between use and visibility, between purpose and presence, in which their various aesthetic ornamentations underscore their distance from nature itself. 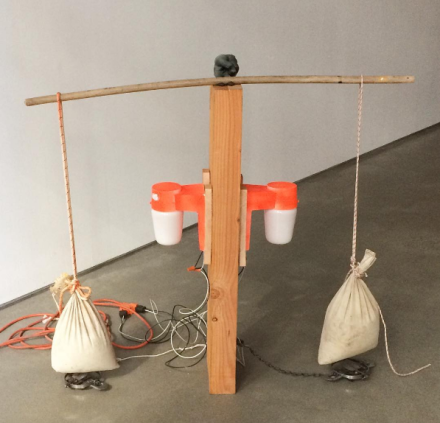 Elsewhere, the show works in the opposite direction, taking domestic objects and iconographies and twisting them away from their original points of access.  Jessi Reaves’s work, for instance, sees modern furniture and fixtures robbed of their immediate purpose.  Shelves and chairs are rendered from delicate materials, and withheld from their context in conjunction with the body by their role as art.  Suspending themselves between design and art object, they emphasize something of an absence from both categories, unable to be used, but never removing themselves from the familiarity of their original forms.  Similarly, artist Catharine Czudej’s sculptures reference the crude booby traps made by Viet Cong soldiers during the Vietnam war, building a dangerous arsenal of weaponry out of domestic materials like wooden planks, coffee cans, lamps and bamboo screens.  In each of her pieces, the domestic material itself is turned towards a wild, uncontainable capacity for violence, hinting at a renewed sense of unpredictability that underscores its still-present, albeit drastically transformed, utility. 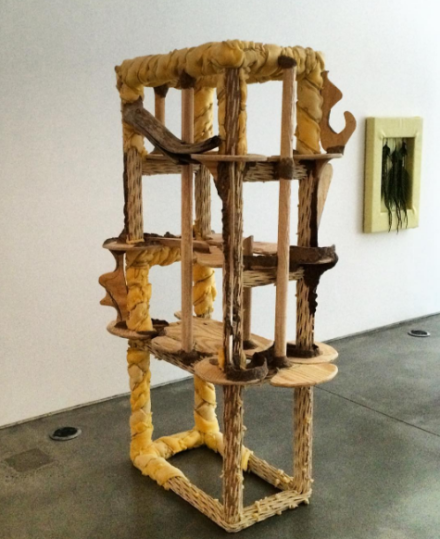 Taken as a whole, the exhibition presents itself as something of a scene or space of its own, one where the various goals and interests of its artists create a sense of impending threat, while showing each object bound up in its role as a gallery object.  It’s a show rooted in the domestic, to be sure, but a sense of the domestic as perpetually open to transformation, to repurposing, and to transformation, through the needs of the user.  It’s the uses themselves that give the exhibition its narrative thread, one that hints at simmering, subtle threads of violence and flux at the core of these objects. 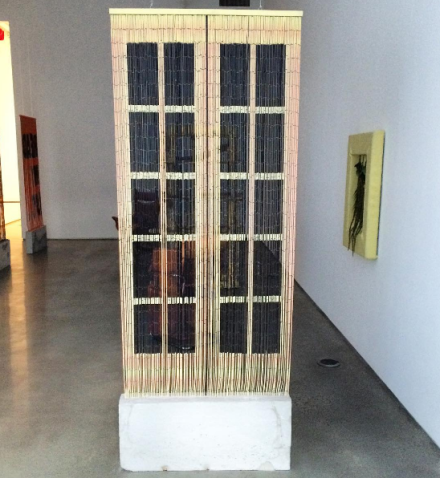 This entry was posted on Wednesday, September 28th, 2016 at 12:36 pm and is filed under Art News, Featured Post, Show. You can follow any responses to this entry through the RSS 2.0 feed. You can leave a response, or trackback from your own site.