New York – Rashid Johnson: “Fly Away” at Hauser and Wirth Through October 22nd, 2016 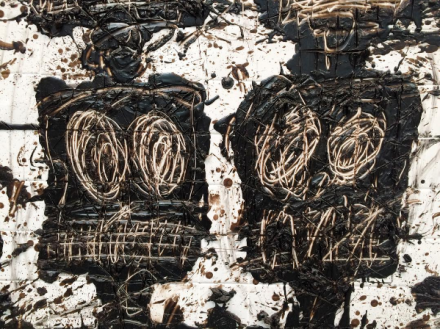 Taking over the full expanse of Hauser and Wirth’s 18th Street location, Rashid Johnson has brought a series of new paintings, sculpture and assemblage to New York for his first gallery show in the city in several years.  The show, which dwells on concepts of escape, anxiety and history, is a concise examination of Johnson’s practice through a range of theoretical approaches and material interests. 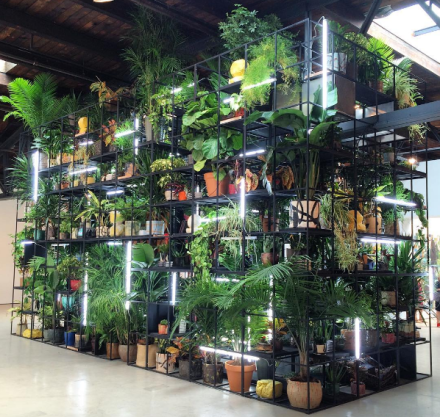 Rashid Johnson, Within Our Gates (2016), via Art Observed

Johnson’s work on view runs through a broad selection of the artist’s varied conceptual exercises and compositional approaches, each time underscoring his intuitive approach to his material both as compositional element and cultural signifier.  Materials like shea butter and African black soap, for instance, are incorporated in equal measure for their own references to the African continent and to the act of performing or signifying African-ness.  As the artist noted during the press preview, shea butter is often dyed to appear more tropical, and, despite its cultural position among African-American consumers, is itself still bound up in its modes of consumption as a form of identity. 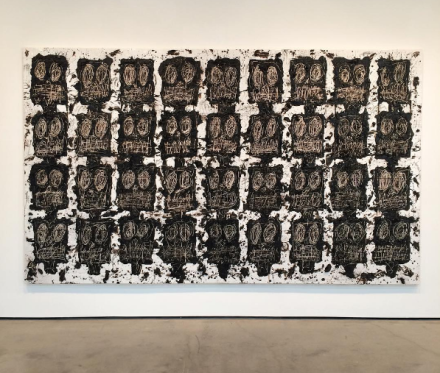 These complex interplays of history are then placed into wider modes of conversation and contrast through Johnson’s studious approach to application and assemblage.  Black soap is smeared over white tiles, and then traced over, rendering slurred, visceral figures in the thick material.   Conversely, the shea butter applied elsewhere is presented upon a table marked with what appear to be rifle cross-hairs, lending an ominous undertone of violence to the presentation (and implied sale) of American blackness. 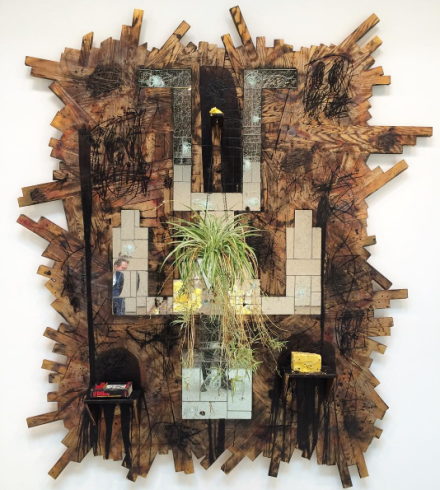 Elsewhere, Johnson’s work cuts closer to the personal, incorporating older video works from his career, photographs of family members, and previous pieces.  Even the cross-hairs used in the aforementioned work is something of a recurring glyph in his pieces, as are the long, dribbling lines of paint that dot a number of his pieces.  In each, Johnson’s operations themselves take on a sort of personal tone, an echoing reference to his own presence in the works that repeats itself from one series to the next.  Particularly in Within Our Gates, the massive cube of houseplants, flurorescent lights and books on African-American identity and politics, his operations are constantly framed by the fusion of his influences with his own engagement.  Formative books are posed next to his video pieces, while elsewhere, hunks of shea butter are dotted and scarred with his own gestures.  In the midst of the piece is a pianist, who sporadically plays arrangements and improvisations in an activation of the sculpture in response to the gallery itself. 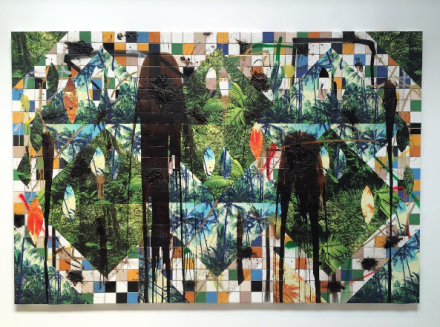 The result of these converging threads is something of an internal mythology, a fusion of cultural touchstones and personal histories placed into conversation through his gestural acts as a painter, and the contextual weaving of his sculptural assemblages.  Johnson’s work is, in part, an examination of his history and practice in constant exchange, and of the gradual construction of a consistent narrative from varied artistic operations and personal research.  This storyline, of Johnson’s life and work, can be strongly felt throughout the show, and makes the divergent bodies of work feel like different chapters in a still unfolding tale.

The exhibition is on view through October 22nd.

This entry was posted on Sunday, September 18th, 2016 at 12:41 pm and is filed under Art News, Featured Post, Show. You can follow any responses to this entry through the RSS 2.0 feed. You can leave a response, or trackback from your own site.