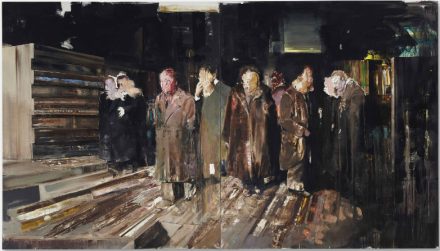 Continuing the week’s unexpectedly strong auction results, Christie’s cinched up its entry in Frieze Week’s series of Contemporary Evening sales tonight in London, capping a 42-lot offering with a sale of brisk and enthusiastic bidding that ultimately pushed the sale to impressively strong results given the glut of sales and works on offer this week.  Only 2 works went unsold over the course of the main sale, with 1 lot withdrawn to bring a final of £34,266,000, followed by a less impressive Italian sale that still managed to achieve £18,680,250 in its own right after a number of passes and underbid lots. 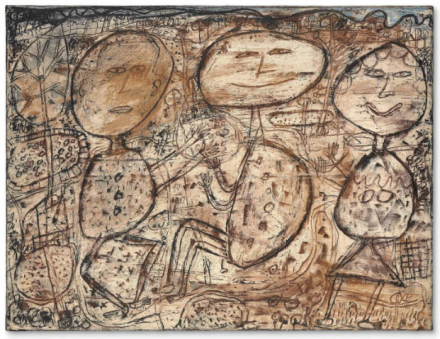 The evening began with a fragmented photo work by Lucy McKenzie, which quickly topped estimate and continued to climb, ultimately selling at over ten times the estimated price for £317,000.  Strong lots followed from Henry Taylor and Lynette Yiadom-Boakye, which both topped estimates, as did a Jonas Wood piece, before Adrian Ghenie’s Nickelodeon blew past estimates to set a new auction record, selling at over six times its estimate for a final of £7,109,000, bringing a round of applause with its hammer.  Another strong lot came with a 1989 Albert Oehlen, which easily met estimate to double estimate at £1,325,000, while the Thomas Schütte bust achieved similar marks, doubling up for a final of £3,749,000. 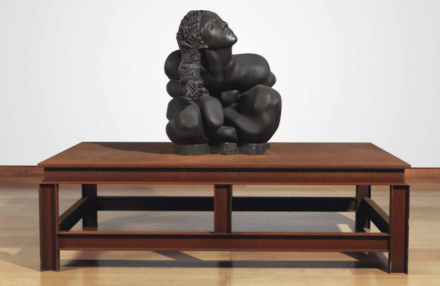 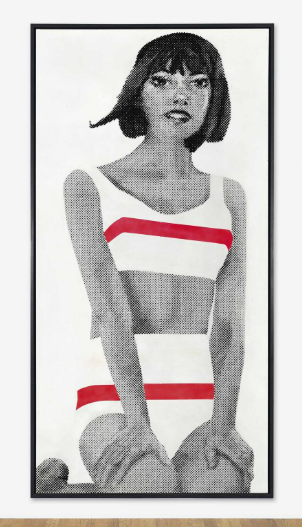 An Anselm Kiefer several lots later seemed to signal the peak of the auction, as fervent bids quickly pushed the sale price to £2,405,000.  A Günther Förg was the first pass in the next lot, while a Jean Dubuffet at Lot 24 handily beat estimate for a final of £2,629,000, with a David Smith passing in the next lot.  A Cy Twombly recovered the sale tempo quickly, however, beating its £1.5m high for a final of £2,629,000.  Another strong lot came with Kazuo Shiraga’s Unprecedented Leap, which met estimates for a strong price of £1,265,000, closing out a string of heritage Japanese and Korean artists that performed well under strong expectations. 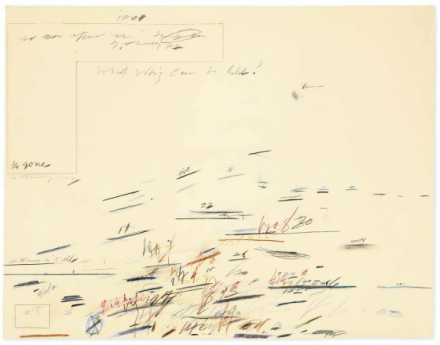 The sale’s final lots saw continued interest, with competitive bids carrying up to the end of the sale.  A Sean Scully topped estimates for a final of £665,000, while a Cindy Sherman went under estimate for a final of £245,000, and a Mel Ramos passed to close the sale. 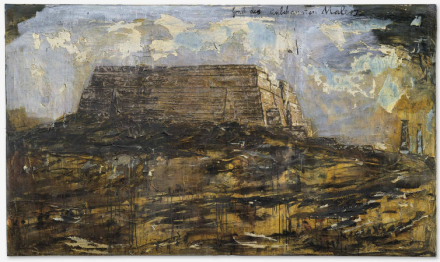 The evening also saw a series of Italian works offered in conjunction with the more broadly focused Post-War auction, but the sale seemed to lack some of the evening’s prior consistency.  An early Pistoletto that seemed to be a sale highlight passed on slim interest, while the cover lot, Pino Pascali’s Tail of a Dolphin, doubled estimate to reach a new world record for the artist at £2,629,000, while a Pistoletto work also performed well with a final of £1,925,000.  Passes were frequent, however, including a major lot by Alberto Burri, and ended the evening’s proceedings on a distinctly subdued note by contrast with the evening’s earlier sale.

This entry was posted on Friday, October 7th, 2016 at 1:48 am and is filed under Art News, Auction Results, Featured Post. You can follow any responses to this entry through the RSS 2.0 feed. You can leave a response, or trackback from your own site.