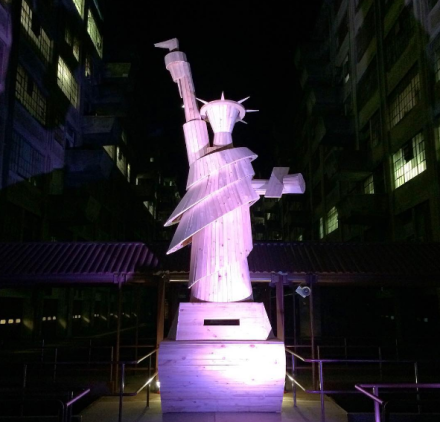 Doomocracy, the long-anticipated collaboration between Pedro Reyes and Creative Time, has opened at the Brooklyn Army Teminal in Sunset Park, bringing a timely “house of horrors” to a city preparing for both the thrills and chills of the Halloween season, and an election cycle that has been often been fraught with a similar sense of doom and gloom.

Reyes, the Mexico City-based artist whose work has long investigate threads of participation, audience engagement and agency, is uniquely equipped to orchestrate a program of this scale and ambition, and does so with impressive vigor. Consumerism, environmental destruction, gun violence and cultural decay each get their moment in the sun, treated with a strangely lighthearted air that makes the subject matter all the more chilling’ perhaps best illustrated in a scene where a group of American housewives show off a line of color-coordinated scarves and firearms. “You’re more of a winter,” says one, as she hands a participant a baby blue assault rifle. 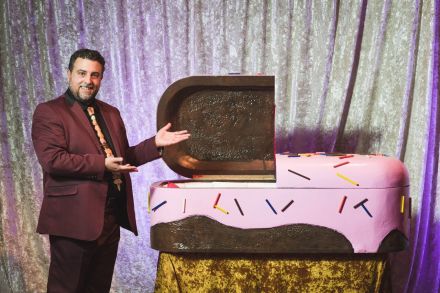 The show’s pacing and planning is tightly choreographed, with each skit doing a remarkable job of pulling the viewer through a space, integrating them into the action of a scene, and then pushing them through towards the next. In one particularly impressive segment, attendees are asked whether or not to take the “golden parachute” during a corporate bailout vote, with each respective decision leading them several floors up to “penthouse apartment,” where, depending on their decision, they are either guests or servers for a pair of wealthy Manhattanites. Showing off recent acquisitions for their collection, the pair then guide the group through a tour of their works (including a comical Christopher Wool send-up that reads “FART”), before pushing them through a heating grate into the next space. 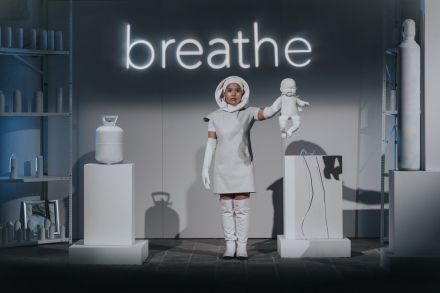 This sense of the surreal operates in impressive fashion throughout the exhibition, particularly in the very real mix of entertainment and horror about he’s state of world affairs. In one scene, a performers’ enthused reflection on the destruction of the eco-system by global warming is delivered in a way that brings unavoidable laughter, even as the reality of water shortages and commoditized natural resources strike close to home. Exiting this scene, the next site works backward, as a mediation on the privatization of federal parkland leads to a virtual reality tour of “nature,” an ominous note broken by the sudden attack of “organ harvesters.”

By the end of the show, where visitors must choose between Trump and Clinton and ultimately end up as masked players in a surreal soccer match, the dark content of Reyes’s work here is unavoidable. The sense of nihilism pervading the show is perhaps what makes its content so palatable, but is equally what makes the show so impressive in its mandate. If stage scenarios Reyes paints seem unavoidable in their savage humor and streaks of realism, than those in attendance are perhaps ever more aware of their present condition by the end of the show. By playing up the conflicts of modernity at their most hilarious points, Reyes allows a moment of spectatorship on America itself, forcing the viewer into a space of self-reflection, and hopefully, a sense of agency. Leaving the space, a lone actor proclaims that “the end is near.” After a walk through Reyes’s house of horrors, it seems to be up to the viewer if these visions will come true.

This entry was posted on Wednesday, October 26th, 2016 at 12:36 pm and is filed under Art News, Featured Post, Show. You can follow any responses to this entry through the RSS 2.0 feed. You can leave a response, or trackback from your own site.