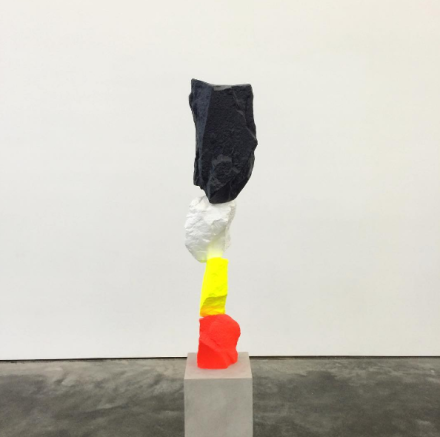 Ugo Rondinone returns to Gladstone Gallery this fall for an exhibition of recent works, culling together a body of works that mark the artist’s engagement with the natural world through four separate series of work.  Bearing the names of various natural forces, Rondinone’s mountain, sun, waterfall, and cloud pieces capture a particular vantage point in modern humanity’s engagement with the world around it. 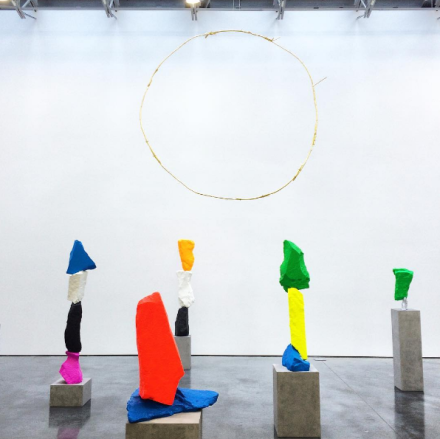 Rondinone’s work presents itself as something of a distended naturalism, one in which his ongoing interest in natural forms is increasingly subjugated to a distinctly light-handed pop styling.  His rock sculptures, coated in day-glo neon paint and placed into precarious vertical arrangements, represent a broader thread of engagement with nature.  Resembling the stone cairn, towering blocks of rocks placed in natural environments as a mark of human presence, Rondinone’s work turns this format into seemingly impossible arrangements, works that occasionally lean out over their base, or twist on their plinth in a graceful suspension of weight and time.  They are works where the artist does not shy away from his own participation in their creation, where, rather than work to ensure that the rocks remain balanced, they are locked securely into place.  The mountain sculptures, in this way, present a sense of nature itself placed within the operational frame of man-made technology, rather than serving as a framework itself to examine humanity against a broader scale of perspective. 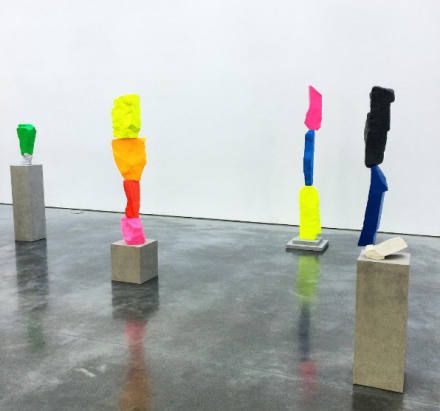 Nowhere is this better seen than his sun pieces, branches twisted into a rough-shod circle and gilded, presenting a variation on Rondinone’s engagements with the natural form elsewhere in the show.  Hovering over the rest of the works on view, Rondinone’s suns offer a fitting counterpoint to the weighty materialism of the works sitting below.  The airy, minimalist nature of the work, holding off on almost any reference to its subject save its round shape and gentle glow, underscores the work as inherently self-aware, a man-made object made by a human hand as a way to engage with the natural world. 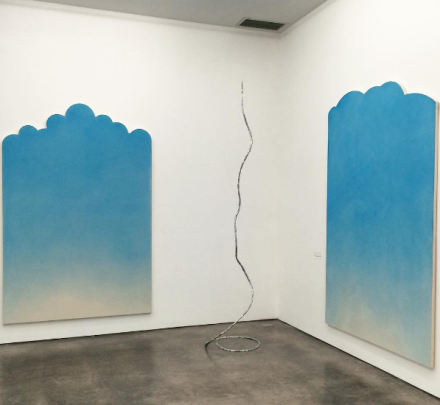 The exhibition also features a series of the artist’s ongoing clouds, painted and cut canvases that use a gentle series of gradients to mimic the ephemeral cloud forms of a bright summer day, yet again pulled back from direct representation by the often cartoonish curves of the canvases themselves.  In between the canvases, his waterfall sculptures arc upwards towards the ceiling, suspending the implied flow of material as if time itself had stopped. 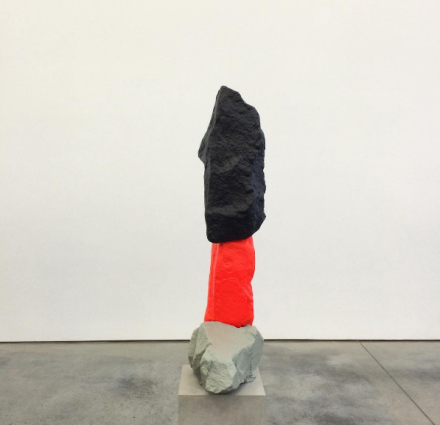 Throughout the exhibition, nature has been captured at a standstill, yet rendered in a manner that never distances itself from this fact, nor from the reality that the artist himself has made this frozen moment possible.  Rondinone’s work, both prolonging and emphasizing man’s encounters with nature, run through a wide range of visual and spatial operations here, yet always return to the same point, much like the curve of the golden rings that hang over the exhibition.

This entry was posted on Tuesday, October 4th, 2016 at 12:36 pm and is filed under Art News, Featured Post, Show. You can follow any responses to this entry through the RSS 2.0 feed. You can leave a response, or trackback from your own site.