Marking his first solo exhibition in the UK, painter Neo Rauch has brought a series of new compositions to David Zwirner, marking a new entry in the artist’s unique explorations of figuration, Central European art history, and the shifting surrealist language that mixes epochs and styles over the range of his practice.  Rendered in his signature  palette of subdued oils on canvas, the works continue Rauch’s exploration of the past as an open framework for interpretation and juxtaposition. 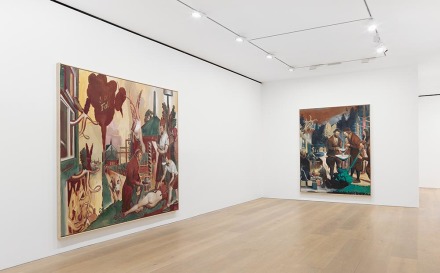 The range of works return to familiar ground for Rauch, twisted fragments of Central European folklore in fantastic arrangements of space and time that give the viewer an impression of a dream state, suspended scenes of country life warped through subtle alterations of space and scale.  In one work, Die Kur, a man seems to inhale an some sort of essence from a plant, while what appears to be a large antler or a twisting root leans out from a nearby rooftop.  In another piece, Skulpturengarten, a pair of shadowy figures cart a misshapen mass up a hill, bathed in a pool of dark browns and blacks that lend the work an eerie atmosphere compounded by the vague shapes and forms of the scene. 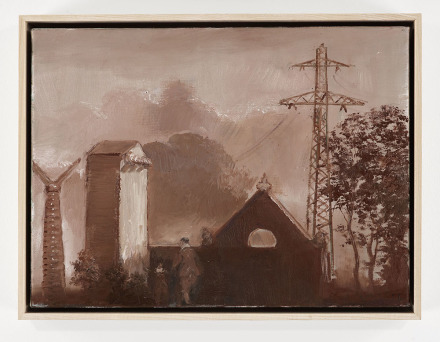 Yet Rauch’s work in this show equally offers new wrinkles and folds to his practice, a sense of subtlety in the execution and selection of his images that was rarely seen in prior works.  It’s perhaps best seen in Die Zuleitung, a somber monochrome that depicts a pair of figures walking towards the horizon, almost fading into the ashy mix of tans and whites.  As an initial scene itself, the work carries little of the recognizable details of Rauch’s piece, until the viewer notices that the figures are dressed in traditional 18th Century garb, even as they walk under a string of power lines and electrical transformers.  Even so, the show also sees the artist pushing further into his unique formal approach, particularly in Der Auftakt, where a series of horned human figures cluster around a platform where a lone, winged man stands waiting to be painted.  The space around him seems to warped and twist, bending even further from the realm of the real as the figure is translated again into another artistic scene. 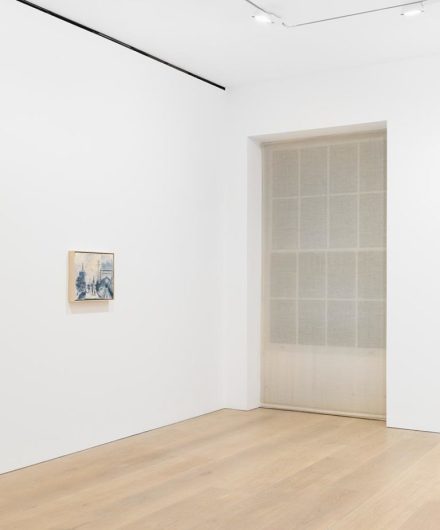 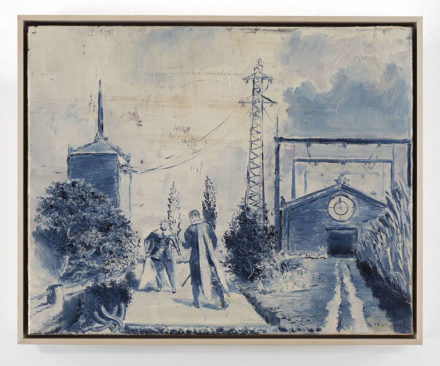 This sense of the ever devolving line between fantasy and reality in Rauch’s work, and his ongoing process of mining that disjunct, sits at the core of the work here.  Exploring both increasingly vivid approaches to the deconstruction of his scenes, coupled with an ever-evolving sense of construction and space within the frame, Rauch’s current exhibition welcomes a renewed appreciation for the artist’s gifts as a painter, even as he continues to exploit and extend the nuances of his craft.

Rondo is on view through November 12th. 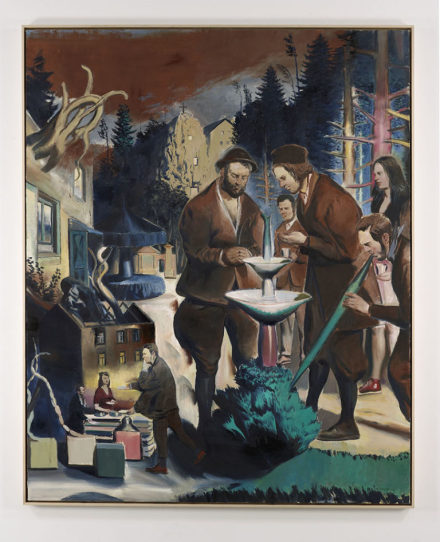 This entry was posted on Wednesday, November 2nd, 2016 at 5:30 pm and is filed under Art News, Featured Post, Show. You can follow any responses to this entry through the RSS 2.0 feed. You can leave a response, or trackback from your own site.