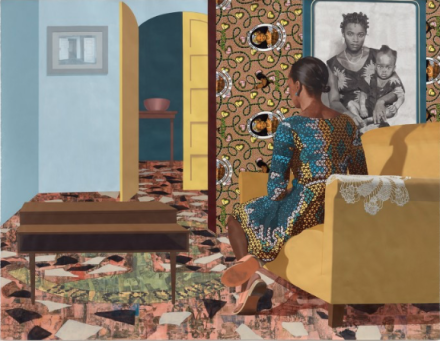 Currently on view at Victoria Miro, Portals is Njideka Akunyili Crosby’s first solo show in Britain. Drawing upon religious art, traditional modes of academic portrait painting, personal anecdotes, history, and cross-cultural exchange, her new series of large-scale paintings examine generalisations about African diaspora and notions of cultural identity. Born in Nigeria, Akunyili Crosby moved to the United States at the age of sixteen, and currently resides in Los Angeles. She is in many ways culturally tied to her homeland, a place she uses as a source of great inspiration, but her work is largely grounded in Western art history. With a keen interest in the ways society categorises individuals and cultures as a whole, she is aware of the groups she falls into. She has been noted by others, and in many ways identifies, as an African American woman, as a Nigerian woman, as an American woman, as a wife, and as an artist; she exists as an individual who inhabits many spheres, residing in a realm of constant flux and transformation. 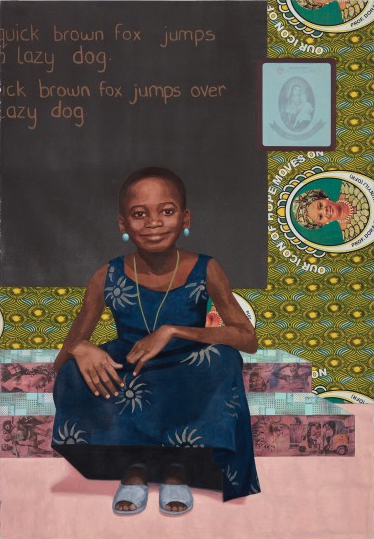 Her multi-layered and highly complex paintings are a way for her to contribute to this new crop of people, the new cultural identity of a body in transition— an immigrant occupying two identities, two distinct cultures. Her compositions are usually figurative, and are always very layered, both literally in terms of collage techniques and metaphorically by making reference to a long line of pictorial symbolism. The series Portals is an invitation for the viewer into her life, where she creates interior scenes or as she calls them ‘wormholes,’ by which the viewer can examine individual identities that exist in scenes of everyday life. She renders her family and friends while they eat, drink, and watch television, simple activities that act as points of departure and arrival for examining the ebbs and flows of cross-cultural identity. The windows, screens, doors, and televisions act as points of entry for crossing the threshold into a new cultural realm. The ethos of her practice is to uncover nuances in time, space, and values that exist in different societies and regions. 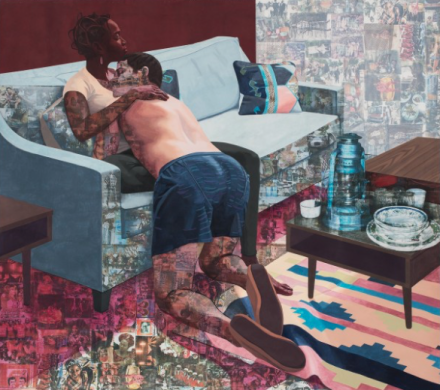 In the work Ike Ya (2016) she captures an affectionate moment between a couple. However, alongside the tenderness of the embrace there is also a sense of pacifying another’s behaviour. Like most of her other portraits, the viewer doesn’t meet the gaze of the subject, rather examining the work from a slightly voyeuristic perspective. Additionally she and her husband are often the models for her paintings, so in many ways this image addresses her anxieties about marrying a white American man, someone who is rooted in another culture. As in many of her other works, her loaded symbolic iconography becomes clear only upon closer inspection. At first glance the painting portrays a relatively westernised couple in their home, however there are key objects that are indicative of an attention to Nigerian pop culture and politics. Using an acetone transfer technique the artist lays a second wave of imagery that layers her Nigerian self with her American self. Offsetting the couple are Nollywood film posters, Nigerian celebrities, and ‘Bring Back our Girls’ slogans, in reference to the 2014 kidnapping of Nigerian schoolgirls by Boko Haram. Additionally the artists grandmother’s storm lantern is included in the scene, an item that is present throughout her oeuvre, such as in Grandmother’s Parlour (2016). 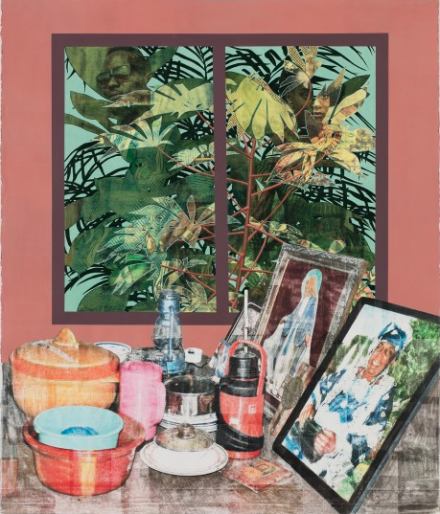 Truly a master storyteller Akunyili Crosby”s work operates in an ‘in-between’ realm, examining different zones of identity and normalcy. In Super Blue Omo (2016), the title refers both to a well-known brand of washing powder that was advertised in Nigeria in the 1980s, and that Akunyili Crosby would have been familiar with as a child, as well as an emotional state of ‘blueness.’ The advertisement for the cleaning product is playing on the television, while the lone female figure stares off into the distance. Sitting on a couch with a tea set for two, this image of coolness draws connections between commodity goods and psychological states. 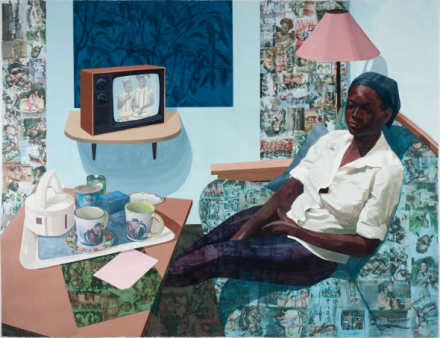 The objects in Akunyili Crosby’s works hold equal symbolic weight as the sitters, sometimes acting as stand-ins for particularly loaded visual icons. The Twain Shall Meet (2015) alludes to traditional still lives in the art historical canon. The image depicts an interior scene with a table owned by her grandmother centrally placed. Atop the table are framed images of her family members, as well as the recurring motif of her grandmother’s kerosene lamp which makes reference to rural areas of Nigeria where electricity is unreliable or nonexistent. There are also tea containers and images of the Virgin Mary, making a commentary on the history of British colonial rule. 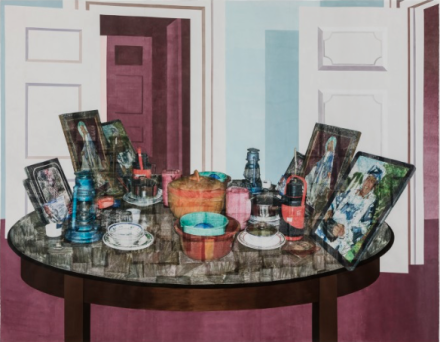 The collaged elements and attention to texture plays into notions of dual identity, and counteract generalisations made about African culture and the diasporic experience.  Akunyili Crosby explains that ‘the layers of herself change over time, as she moves farther out into the world.’  Her patchwork of iconography allows her to create multi-faceted individuals. Speaking to both urban and rural life, she depicts the many identities that exist in a single person. It is hard to categorise her figures into a simple box, because the specific idea of a character doesn’t exist. Her vibrant works portray the contemporary experience of postcolonial self, of an individual who inhabits a liminal space.

This entry was posted on Sunday, November 6th, 2016 at 2:41 pm and is filed under Art News, Featured Post, Show. You can follow any responses to this entry through the RSS 2.0 feed. You can leave a response, or trackback from your own site.