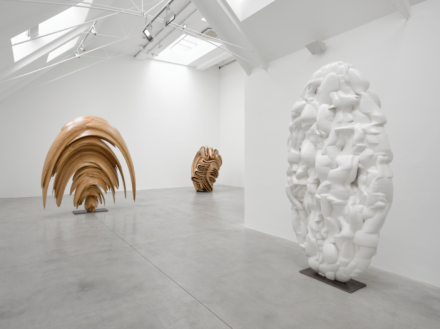 Spanning both London venues, Tony Cragg’s fourteenth exhibition with Lisson Gallery features a new series of sculptural works that continue and further develop his pursuit of manifesting dynamic energy within the gallery space in conjunction with his keen interest in texture and materiality.  Cragg’s practice begins with simple, yet loaded elements of gestural line, signifying the presence of the artist’s hand in the work, often evolving into morphed, distended form that play on ideas of perception and subjective realities. Cragg works towards uncovering the unseen, both in terms of untapped energy and the unseen rules of the universe, metaphysical manifestations of connectivity and action, layering forms and lines to reshape visions of the contemporary world. 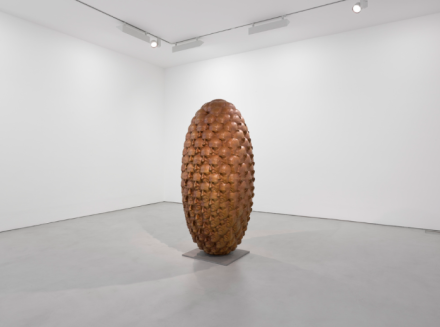 Approaching sculpture with a modern mindset, Cragg’s work confounds the rational aspects of the medium through the viewer’s response, drawing on forms and materials that stem from his early work utilizing found detritus and consumer goods in his sculptural assemblages.  With previous work exploring site-specific investigations of space in relation to the objects within it, his arrangements pioneered the experience of space, and the object’s participation in this exchange between viewer and site.  But Cragg’s evolution would eventually branch out towards notions of the ephemeral in space rather than in material, and his works eventually branched out into more expressive explorations of materiality itself.  Wood, plaster, stone, fiberglass, steel, iron, polystyrene, and bronze became vectors for the representation and exploration of growth and energy.  As his works took on a more solid form, he continued to focus on the relationship between the individual elements of each work and his larger sculptural program. 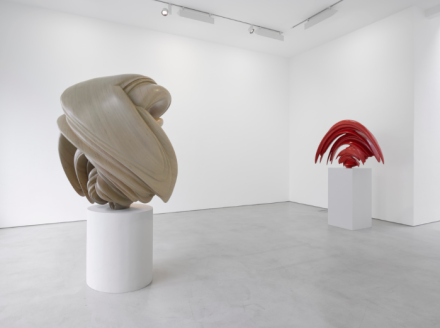 As Cragg’s work into this sense of sculptural possibility, his objects gradually shed their relations to the real outside the gallery space.  Working with familiar forms like cups and bowls, Cragg would gradually transform them beyond recognition, producing sculptures that represented notions of cells, organs, organisms, and the body while remaining vaguely grounded in its original.  In later works, Cragg translated the flat two-dimensional line into the third-dimension by creating curving shapes that he then fused together and covered with external layerings.  The skeletal base structure underneath an outer ‘skin’ suggests a tension, a kinetic energy referencing the growth and development of both plants and animals. 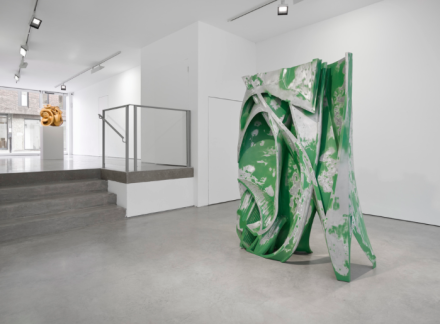 His new series on display fits in with these intentions of his existing oeuvre, his desire to portray invisible energy in a physical form.  His use of strong, weighted elements suggest a sense of permanence juxtaposed with the dynamic fluidity of perceived energy and movement.  Works in the Industrial Nature series, for instance, refer to fusions of new forms, the collisions between natural, organic, and artificial elements. Exploring tension, as well as geometric versus organic structures, this series is a reflection of the natural world. 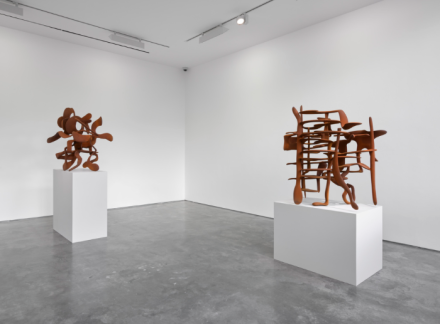 Three of the bronzes on display, Willow, Skull, and Migrant, take a different approach than that of his Industrial Nature works, but are equally interested in reshaping the world through the reimagining of materials. Similarly, his white sculptures in wood and onyx, such as Sail can be viewed as an extension of his Versus series, drawing his sense of energy into the raw experience of movement rather than seeking to embody it within the object itself.  Alongside works in metal, there is also a series of glass sculptures cast from Cragg’s own head. Titled Identity, this collection is exhibited next to the Early Forms, Rational Beings, and Manipulations series that he began in the 1980s.

Honoring Cragg’s transformative relationship with elements of form, volume, surface, scale, and texture, the exhibition highlights his nuanced understanding of history and fantasy, and his mission of creating an alternative reality through spacial awareness and manipulation of form.

The show closes on November 5th.

This entry was posted on Thursday, November 3rd, 2016 at 12:26 pm and is filed under Art News, Featured Post, Show. You can follow any responses to this entry through the RSS 2.0 feed. You can leave a response, or trackback from your own site.