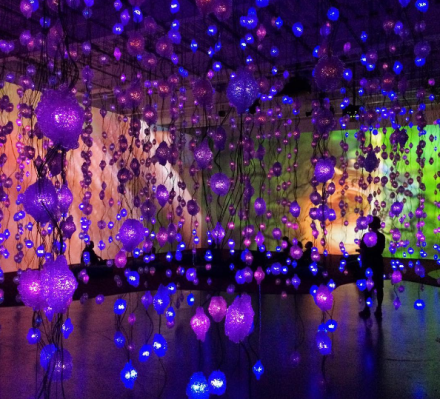 Pixel Forest, the first New York City museum survey dedicated to the work of Swiss artist Pipilotti Rist, has opened this month at the New Museum, turning three floors of the museum into a swirling progression of images and senses, colors and lights.  Twisting and moving through a series of works from the full breadth of Rist’s career, the show melds classic pieces with new commissions, well-regarded installations with new information and conversations across the expanse of her practice.

The show winds its way through a strikingly deep engagement with Rist’s multivalent images and scenes, her intersections of screaming figures, waving body parts, and natural objects, layered over each other in a swirling mass of often disorienting editing and overlaying.  On the third floor of the space, this is compounded by the show’s titular work, Pixel Forest, an immersive series of hanging lights that shift their color and hue in contrast with the massive wall of digital videos playing behind it.  Translating Rist’s approach to the act of sensation, melding the image itself with a broader sense of the space around it, this pairing of images welcomes a lingering engagement by viewers, watching these scenes evolve and interact. 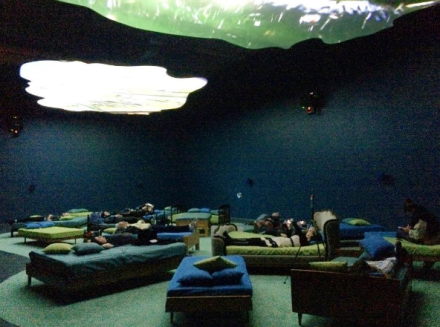 The show itself draws in particular on the shaping of the viewing space itself, with a number of works dedicating themselves to the act of viewing.  The third floor’s viewing site, taken from her 2014 piece Worry Will Vanish, draws on research into Autogenic Training by German psychiatrist Johannes Heinrich Schultz, allowing an increased sense of relaxation through the repetition of colors and forms while spread out on the floor.  It’s particularly interesting to consider this sense of relaxation in relation to Rist’s work itself, which features frequent images of sexual organs, long, meandering images of fingers, and other slow, graceful movements.  Setting up this site of relaxation, Rist is able to explore her own coded sense of the body and its various sensual capacities without overwhelming the viewer.  Applied here, the work takes this practice one step further, allowing a site where the artist’s career can unfold before the viewers eyes. 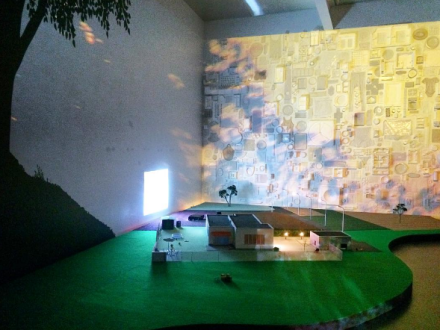 Rist’s work, in this sense, functions in a fascinatingly modular manner, as pieces flow effortlessly between each other, sounds fading and rising from one work to the next, all underscored by gradual shifts in the tone and hue of the lights surrounding the show’s massive video screens.  On the second floor, one is presented with a series of her short video pieces, which blend the varied interests and exuberant interpretations of pop culture and music into a swirling portrait of the artist and the world around her in close collaboration. The movement through the video works opens an exchange not merely between various interests in the artist’s career, but her material itself, the recurring images and symbols that populate her pieces (flowers, hands, dirt, and skin and other mediums in close contact with each other).  Welcome to sit and relax as these images blur past, the viewer is given the sense of her work at large as not merely an unbroken chain of related concepts, but an interrelated series of inquiries always arriving back at representations of sensation itself.  It’s the spirit of Rist’s work, the combination of otherworldly atmospheres and careful attention to the movements and manipulations of bodily sensation, that remains a constant here. 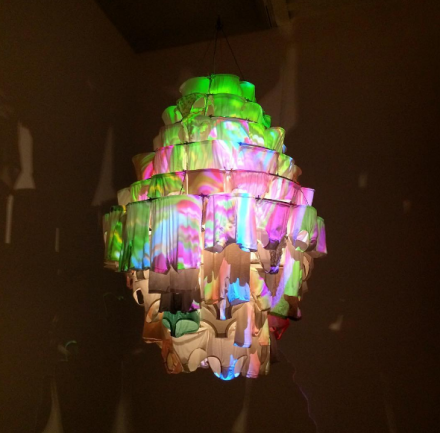 This entry was posted on Friday, November 25th, 2016 at 3:01 pm and is filed under Art News, Featured Post, Show. You can follow any responses to this entry through the RSS 2.0 feed. You can leave a response, or trackback from your own site.