Over the last 40 years, painter James Rosenquist has continued to mine and manipulate the languages of consumer capitalism, mass-market branding, and the formal techniques of sign-painting, creating works that push these same linguistic elements to points of near-disintegration.  His pieces, huge swirling arrangements of color and line, smash commodities and natural forms together, combining food, buildings, and other objects into confounding, hybridized arrangements.  This ongoing experimentation with the canvas as a space of critical examination and surrealist detuning takes up the full expanse of Thaddaeus Ropac Gallery’s Pantin exhibition space, joined by a series of collages at its space in The Marais. 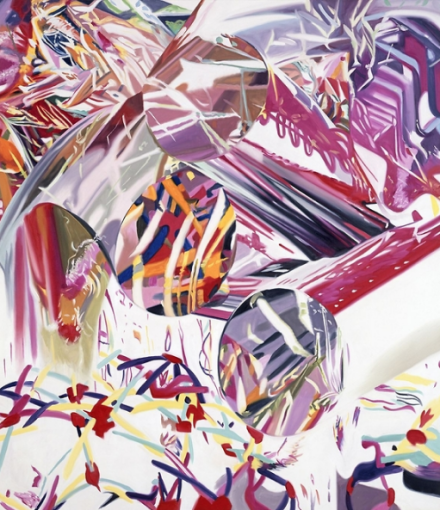 Rosenquist’s body of work has continued to shift and evolve since he began painting his immense canvases during the 1970’s, works that took a nuanced yet explicitly commercial language and pushed it to a near breaking point, rendering disjointed, yet compelling streams of visual material in close proximity.  Allowing the works’ disparate elements to form lines of progression across the space, or create dizzying counterpoint to other gestural movements, Rosenquist’s work explores a painterly language bound up in textual signifiers of the present day.  Yet this placement also empties out these highly weighted commodity images, turning them back into a series of lines and colors that enter a sort of liminal space between their role as consumable material, and compositional elements. 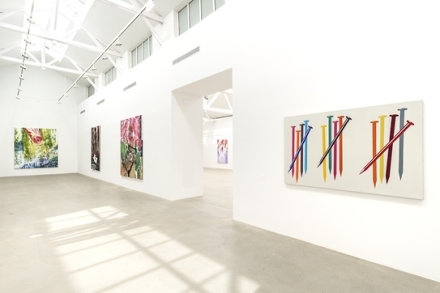 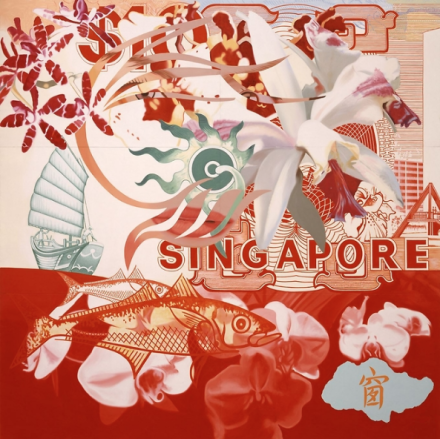 The show manages to carry this line in Rosenquist’s work quite well, running through a body of 33 works with an impressive curatorial economy that underscores Rosenquist’s various thematic interests and evolution as an artist while rarely losing site of coherent threads in his work.  Of particularly note is Four New Clear Women (1982), a major early work that recently reappeared at Art Basel’s Unlimited section earlier this year.  Stretching to over 45 feet in length, the work is a dauntingly massive piece, akin to a billboard in its own right.  Yet the form and implied function of such massive signage is sabotaged by the confounding arrangement of faces, and the jagged, intersections of stylized lines Rosenquist includes across its surface.  The various languages to capital, and the graphic signatures it carries with it, are in full view, yet their forced negotiation and lack of any anchoring concept leaves the viewer to wander freely in its arrangement. 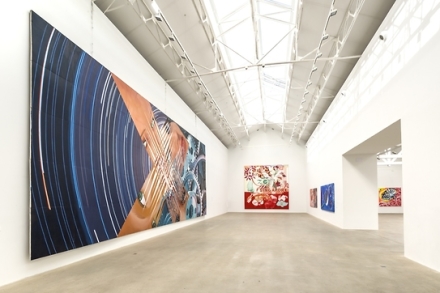 The show continues through Rosenquist’s work during the 1990’s and onwards, mixing more cosmic and natural elements into his pieces.  Works like DNA in the Multiverse, for instance, continue his exploration of commodity graphics, pulling a distorted “Tide” logo into engagement with a series of starry skylines and images of biological material, the work depicts a vision of expanded consciousness that never shies away from its ground in the material world of the capitalist present.  It’s this sense of the fantastic, mingling with the immediately familiar images of today, that makes Rosenquist’s work so engrossing, and what makes this show so cohesive and engaging. 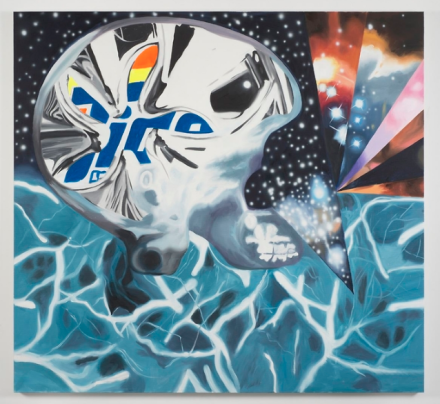 James Rosenquist, DNA in the Multiverse (2012), via Thaddaeus Ropac

This entry was posted on Tuesday, November 1st, 2016 at 12:47 pm and is filed under Art News, Featured Post, Show. You can follow any responses to this entry through the RSS 2.0 feed. You can leave a response, or trackback from your own site.